With the final rankings to set the National Tournament released, the remaining games are more for practice and pride than anything else. Still, anytime you can remain the only team in the league to win the ESCHL Tournament is a nice little reminder of your dominance over the league. Keeping momentum is undoubtedly important, too. Not surprisingly, the ESCHL tournament found the top seeds (host-team Delaware and West Chester) winning their respective opening round games to make it to the semifinals on Saturday. Being the #1 seed, Penn State would take on West Chester, while Rhode Island would have to take on Delaware in the other semi.

February 20, vs West Chester, 5-3 W: The Rams are always a tough team to play, and they would undoubtedly fight hard to salvage an otherwise disappointing season. Both teams would get a few chances throughout the period, with neither team sustaining consistent pressure. With about five minutes left in the period, Taylor Cera would finally break the scoreless period, giving the Icers the 1-0. But before heading into the intermission, the season-long plague of bad turnovers lead to another goal for the opponent, allowing the Golden Rams to tie the game at 1-1. Just 19 seconds after the WCU goal, Marek Polidor would score on the powerplay, returning the lead and momentum to the Icers' side. The energy and opportunities would continue for both teams, and Matt Kirstein would extended the Icers' lead to 3-1. But WCU wasn't going away and would counter with two goals of their own before the end of the period, making it a 3-3 tie heading into the 3rd period.

During the third period, a WCU player was checked and went down awkwardly, causing an extended stoppage to address the seriousness of the injury. Following this long injury break, both teams had to find a way to play 12 more minutes of hockey. As the time was winding down in the period, Tim O'Brien stepped into his role as the playmaker, putting home the go-ahead goal with just under 4 minutes left in the game, then clinching the game with an empty-netter to give the Icers the 5-3 win. The team would have to wait to know their opponent in the championship game, as the URI-UDel game would follow the Icers' game. But being in the championship game was all that was needed. (In a high-scoring affair, URI advance to the championship game by taking down Delaware, 7-5.) 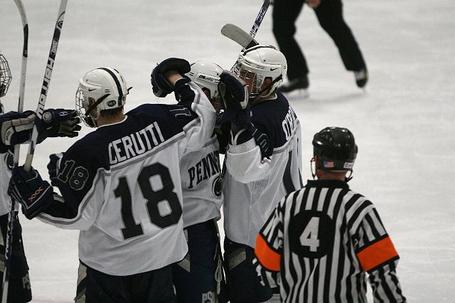 So, yeah. Get used to this picture.

February 21, vs URI, 7-5 W: Two weeks ago, these two teams fought hard - one to improve their standings, one playing for their post-season lives. Back again, and the two teams would fight again, this time for the ESCHL Post-Season Championship. The battles would start early, and Penn State would open the scoring with 6:30 left in the period thanks to Steve Thurston on the power play. But URI wouldn't remain silent, as they would score twice in under a minute with less than three minutes left in the period, taking the 2-1 lead into the intermission. Still, the Icers weren't just going to roll over. Chris Cerutti would put home an early goal on a great feed from Tim O'Brien. Then, Chris Cerutti would put home a power play goal on a great from Tim O'Brien. Then, Chris Cerutti would put home another power play goal on a great feed from Tim O'Brien. And that, my friends, is what we in the hockey business call a natural hat trick. And a 4-2 Icers lead. A few minutes later, Cerutti would shed the O'Brien assist and get his 4th goal of the game, extending the lead to 5-2. TIm O'Brien would finally break Cerutti's goal-scoring streak by getting a power play goal of his own. URI would cut the lead to 6-3 before the end of the period, but the damage had been done. The teams would swap goals, and URI would get a second goal with just 0.4 seconds remaining. But it would mean little, as the Icers would win 7-5 and remain the only team to win the ESCHL Tournament title. 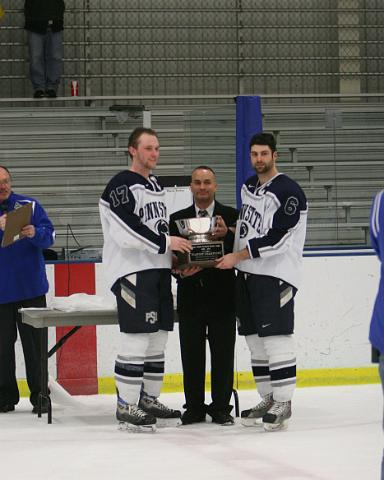 Reflections and Ramblings: I'll do a full overview of the ACHA Tournament prior to the first round. With two rather meaningless games against Robert Morris (PA) next weekend, I'm sure I'll have more to discuss in these updates. I wish I could say that I might be learning some new names with those games, under the expectation the coaches would play some of the normal scratches for some scrub time. But the injuries plaguing this team means I've seen basically everyone to this point, which isn't necessarily a bad thing heading into the tournament. The top players get some rest to heal their injuries, and the other guys get some more valuable playing time.

Positives for the team right now is that they are scoring and scoring often. And even though Cerutti and Tim O'Brien have a combined 17 goals in the past 7 games (10 and 7, respectively), there is still even scoring throughout the line-up. Seravalli has made some great contributions this season, and goals are still coming from Polidor and Paradis. Let's not forget the combo of Eric Steinour and Dominic Morrone who have been taking some time off to mend up for the tournament. The two negatives right now are the penalties and bad turnovers. While the penalty kill units have been solid, giving the better teams in the league extra offensive opportunities is not something you want to do come tournament time. As for the turnovers, the defensemen just need to remember to not get cute with the puck when they are the last man back. Clean up these simple mental errors, and the Icers have all the makings to win the ACHA title this season.

The Lady Icers finished out their regular season strong with two dominating wins over U of Buffalo, 5-0 and 7-0 respectively. Those two wins boosted the Lady Icers to the #2 rank for next weekend's ECWHL Tournament in Rhode Island. I'm assuming they'll play UMass on Saturday, and then the winner of that game will play the winner of the URI-Buffalo game for the championship on Sunday. The Lady Icers also got their invite to the National Tournament, finding their way into Pool B with Liberty, Rhode Island, and Robert Morris. It's a very hard draw, but the experience will be great for the young players, and it's a definite sign of growth for the team. Also want to give notice to the two seniors - Claire Slagis and Alicia Lepore. Both have been great players, and Alicia has been a solid contributor since her freshman year and is leading the team in goals and total points. Good luck to them and the entire team in the coming tournaments!