Welcome to Part One of the Recruiting Report. We'll be doing this review chronologically, starting at the beginning, WAY back in November of 2008. By this time last year, we already had two highly sought after recruits, spoiling us for the four month lull between Jones and Redd. However, the entire class has turned out phenomenal, so sit back, relax, and get to know your 2010 Penn State freshmen.

NOTE: completely absent from this Part One analysis is a certain wide receiver from Maryland. That is not an oversight.

Who would have thought that the first three commits in 2010 would also be the three most highly touted? All three of these studs have a 5* rating according to Scout, and all three have nothing but upside coming to PSU. 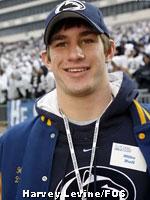 Hailing from my neck of the woods, Canon Mac beast Mike Hull made his decision to play at Penn State very early, and hasn't looked back since. Hull's father and uncle both played at PSU, making early PSU predictions rather easy to call. Further, Hull has been a driving force for others, spending time at many camps talking up Penn State and encouraging other to follow him to one of the greatest places to play college football. He held offers from the likes of Michigan, Pitt, and West Virginia, and even visited Ohio State, before deciding on the Blue and White in November. Ironically, the game at which Hull committed was the famed back-to-back timeout in the frigid November cold against Michigan State game, one many Lion fans will remember for the asshatery of Mark Dantonio, but that which we can all remember now as the game that officially brought us Mike Hull.

As a sophomore, Hull broke the Canon Mac single season record for rushing, but also played a mean middle linebacker, the position he will undoubtedly inherit at Penn State. The kid is a natural, sniffing out offenses before they even begin and beating people to the spot with unbridled regularity. Last season, Hull was named Associated Press Pennsylvania Class AAAA first-team linebacker, an honor saved for only the best players in PA's hardest conference (one of the other 4 LBs chosen, and only other junior, was Kyle Baublitz; you'll meet Kyle at a later edition of Recruiting Report).

Many reports say that Hull is smaller than the prototypical MLB, but what he lacks in size he makes up for in intensity and a general nose for the football. That nose was pretty good on the diamond and the wrestling mat, but its on the gridiron that Hull truly shines. Look for him to make an IMMEDIATE impact at PSU, especially with the loss of all three starting linebackers of the 2009 season. He played in the Army All-American Bowl recently, was named to the Pennsylvania team in the Big 33 matchup, a contest of Ohio vs. PA high school kids (also on the PA team were Tom Ricketts and Alex Kenney, both of which you'll also meet at later Recruiting Reports), and made the Pennsylvania sports writers' Class AAAA All-Star team. 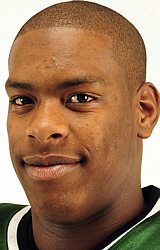 Originally from Pittsburgh area McKees Rocks, Jones has, by all accounts, one of the strongest arms in the country. I say originally because Jones was one of seven 2010 commits to enroll early and is currently attending classes (and conditioning, practicing, and getting acclimated) at Penn State. Jones had early interest from Pitt, and garnered further interest from West Virginia, Iowa, and Stanford, among others. However, in mid-January, Jones spurned them all for the Lions after his mother allegedly told him to "follow his heart."

A physically intimidating athlete, Jones is one of the top "pocket passer" style QB's in the country. Reminiscent of Daryl Clark, Jones has the ability to hit the open man 55 yards downfield, but can also get out of the pocket when things go awry. His mobility has not faltered even though he seriously injured his ankle in July playing pickup basketball. He is a linebacker playing QB; a difficult athlete to bring down in the backfield, it's going to take a lot from any defense to sack Jones before he beats you with his arms or legs. His arm strength is routinely brought up when discussing his attributes, but what stands out to me is that he has an unbelievably level head on his shoulders, at least for a freshman in college. He understands that competition is coming, and welcomes the challenge. Further, Jones is definitively a family man. He made it clear at the beginning, during, and with the selection of PSU portions of his recruiting that his family meant a lot and he did not want to be far from them. The fact that he committed early, became good friends with other recruits, and enrolled early speaks volumes about the character of this kid.

In late March, early April, Jones created some unease in the Nittany Nation by announcing he was taking other visits, but never wavered from his Lion allegiance. While he was originally told that QB recruiting for the year would end with him, this minor hiccup may have lead to the increased recruitment, and eventual signing, of Robert Bolden (whom you'll meet later). This feeling out process by Jones only lasted a month or so, and he was back to his commitment by May, just in time to start showing off at summer camps. Unfortunately, wavering rumors surfaced again in September, only to be quickly quashed by Jones, recommitting to PSU over reports that he was headed to Pitt.

Jones is seen as a raw talent, with the strengths to be a solid collegiate QB, but lacking the technical aspects at this point in his career. However, most reports have labeled Jones as a "natural leader" and that moniker, coupled with the levelheadedness and team-first attitude seen in Jones, lead me to believe that PSU has a real gem in Paul Jones. Like Mike Hull, Jones participated in the Army All-American game, was named to the Pittsburgh Post-Gazette's Fabulous 22 team, and was named to the Second Team All-State his senior year. 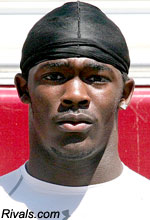 Silas comes to us from Stamford, CT, where he played his high school ball at tiny King & Low-Heywood Thomas Prep. Other schools that showed early interest included Notre Dame, Ohio State, Florida, Rutgers, North Carolina, Texas and Tennessee, but Redd became the first out of state commit for JoePa's boys in early May. A strong runner with excellent agility, Redd has all the tools for an incoming freshman to come in and make an immediate impact. The depth chart may be clogged ahead of him, but the separation evens out relatively quickly in the future, so look for Silas Redd to be a household name very soon.

During high school, Redd was a regular at gym and personal training sessions, more often than not working hard with close friend (and star of rival Stamford HS) Khairi Fortt (you'll meet Fortt later). Many analysts can't say enough about Redd, hyping his "cut on a dime" ability and the fact that he is certainly a north-south runner. These reports are reminiscent of recent power runners at Penn State, but the smaller Redd also has the speed to get upfield in a hurry. However, this may also be his current knock (and there are very few), that he will need to bulk up a bit in order to maintain success when the would-be-tacklers are Ohio State linebackers and not whomever he played in high school.

Like the other stellar early recruits, Redd's list of accolades is long and impressive. Redd was named First Team at the U.S. Army Junior Combine, Offensive MVP at the Top Gun Camp, was named one of six finalists for the U.S. Army Player of the Year Award (which he did not win) and continued to attend top-talent camps well into his commitment period, when many kids like to take it easy.

Like Jones, Redd seems to have a ridiculously balanced head on his shoulders, just the right amount of confidence and swagger, and the physical tools to back up that swagger. He seems to be poised for great things in Blue and White; Redd even enrolled early like Jones to get a jump on the conditioning and training that go along with preparing to be a great running back at a program with a distinguished lineage of great running backs.

That is all for today, but stay tuned for the next edition of Recruiting Report, where we'll look at three Pennsylvania mudders in Luke Graham, Tom Ricketts, and Miles Dieffenbach.