This was a huge weekend in terms of ESCHL. URI came in with a 1-point lead in the standings, and this would be their last two games against ESCHL opponents, while the Icers still have a home-and-home set next weekend against Drexel. Some notes heading into the weekend set - Teddy Hume (illness), Dan Loucks (shoulder), and George Saad (knee) were all out, but thankfully their injuries/illnesses should keep them out only for the short-term. In place of Hume, freshman Dan Ivanir would get the start in net for Friday night's game.

Being alumni weekend, there were a number of recognitions - like the 1980, 1984, 1990, and 2000 championship teams, and the 1939-1940 team as the pioneers of Penn State hockey. Steve Penstone's blog has the videos used from the weekend, if you're interested to see and hear about the origins of Penn State hockey from some of the founders. 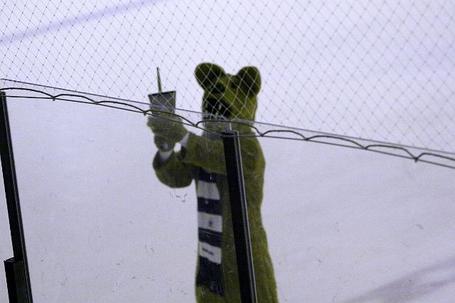 You know it's a big game when the Lion shows up

February 5, vs Rhode Island, 4-3 L: The snow couldn't hold back decades of Icer alumni and large numbers of fans from packing the Ice Pavilion for Alumni Weekend. And the energy was there early, with Joe Zitarelli giving the icers an early 1-0 just 1:35 into the 1st period. The two teams would take turns controlling the offensive action throughout the period, but a couple of Icers penalties finally led to a URI power play goal to tie the game at 1-1 late in the period. An early 2nd period power play for the Icers would give Chris Cerutti the chance to give the Icers the 2-1 lead. But just like last weekend, the Icers would fall apart in the 2nd period, allowing the Rams to score 3 unanswered goals, taking the 4-2 lead into the 2nd intermission. The Icers need to get a quick jump in the 3rd to get them back in this game, and Tim O'Brien would comply with his 17th of the season, cutting the lead to 4-3. The Icers would get a few chances late but to no avail, as the Rams would take the game, 4-3.

February 6, vs Rhode Island, 5-1 W: A few more changes, as a healthy Teddy Hume would get the start in net. As well, Dustin Roux and Ryan Erbe would get some playing time, replacing Mike Longo and Mike Broccolo. All these changes were signs that today's game was big. And the 1st period played out much like Friday night - an early Icers goal (on the stick of Nick Seravalli) was countered by a late power play goal by the Rams, sending the game into the first intermission tied at 1-1. The similarities would continue into the 2nd period, as Dominic Morrone would feed Seravalli for Seravalli's second goal of the game, giving the Icers the 2-1 lead. Penalties would continue to be a problem for the Icers, but today, the Icers would keep the Rams off the board. After a long 2-man disadvantage for the Icers, the Icers were able to kill both penalties and then quickly score a goal of their own - this time on the stick of Taylor Cera, set-up again by some great work by Morrone. The Icers would carry that 3-1 lead into the 3rd period, and they'd keep the pressure on. Chris Cerutti would score a couple of goals to extend the lead to the final score of 5-1. The split with URI means the Icers remain 1 point behind the Rams in the ESCHL standings. A win over Drexel next weekend will clinch the regular season ESCHL title for the Icers, and the autobid that comes along with that title. 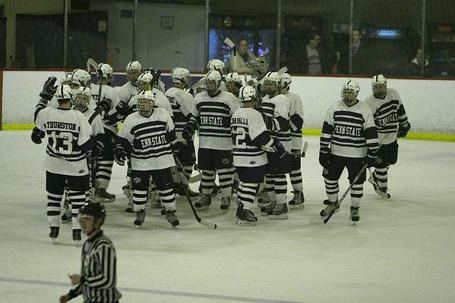 Reflections and Ramblings: As anticipated, the top 4 teams in the rankings didn't change. Iowa State and Liberty flipped spots 5 and 6, and 8 thru 11 did some swapping (Oakland, Minot State, Arizona State, and URI - now in that order) as well. Interestingly, Delaware saw no help from their Saturday win over the Icers, staying at #14 in the newest rankings. Looking at the National Tournament picture, 3 are set (Robert Morris (IL), Stony Brook, Canton), while 4 more autobids are still up for grabs. The CSCHL will likely go to someone already set (Lindenwood, Ohio, Illinois, or Iowa State), and the ECHL will likely be similar. The other two will be outsiders - #22 WVU taking the CHMA, and an unranked Rutgers or Cornell taking the NECHL. So, let's figure 5 spots out of 16 will be taken by teams not in the top 16, leaving the top 11 in the ACHA rankings to head into the tournament. [I then wrote a long discussion, detailing some of the expectations for the tourney. Then the weekend happened. This is my adjusted work.]

Weekend Winners: #11 Rhode Island - their split with us will likely be enough to get them into the tournament without the autobid. #13 Central Oklahoma - swept #10 Arizona State, which might be enough to get them the jump into the top 11. #12 Adrian and #9 Minot State - Both did well enough against their opponents to not drop and further be helped by the losers (mentioned below).

Weekend Losers: #8 Oakland - lost 2 of 3 against the best ACHA D2 team, Davenport. Yes, Davenport is good, but two losses (at home, no less) to a D2 team will not look good. #10 Arizona State - got swept by #13 Central Oklahoma. After starting out the season red hot, the Sun Devils fizzled late and look to be slipping out of the tournament. #14 Delaware - lost out thanks to SNOWMAGEDDON 2010! Their last big weekend for movement against Liberty was canceled due to the snow with no chance for a make-up prior to the final rankings being released. Stuck at #14, they'll be watching the tourney from home this season.

So here's what I think we can expect. The top 7 are in regardless of what happens this weekend (Lindenwood, Penn State, Ohio, Illinois, Iowa State, Liberty, Oklahoma). The next closest team to be locked is likely Rhode Island, assuming they don't WIN FAIL their home set against Stony Brook. Minot State is the next closest, but they're still looking at a tough set against a good Iowa State team. A split and Minot State is in. Oakland might get in on the back of an easy final weekend against Buffalo. And then it will come down to weekend set between Adrian and Western Michigan. I think Adrian will have to sweep to jump Arizona State (who will be taking on an easy 'Nova team). Central Oklahoma, who made a great push against ASU, gets the short end with the toughest weekend set against Illinois. So look at the top 11 - they're likely to be the top 11 going on to the ACHA Tournament.

Not much to discuss with Drexel next week. It's a home-and-home, which can take its toll on the players. But with the chance for a 3rd straight ESCHL regular season title, the Icers will be playing hard to get that title. A sweep will also ensure a top 3 position heading into the tournament. After that, it's the ESCHL Post-Season Tournament - just another chance for the teams to play each other and get another trophy or something. Following the ESCHL Tourney is a weekend set against Robert Morris (PA) before heading into the ACHA Tournament in Bensenville, IL. Obviously, I'll have more info on the ACHA Tournament as it comes closer.