Who Cares? Penn State Basketball For The Masses

Share All sharing options for: Who Cares? Penn State Basketball For The Masses 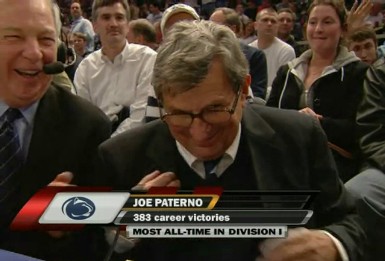 That would be one way.

On getting the masses into the house that Disney on Ice built....

What is it about Penn State basketball that makes the vast majority of the student body and alumni so disconnected?

Junny: To the casual fan, Penn State basketball is nothing more than another non-football varsity sport. They play in an arena that seats over 15K people, and their sport is easily the second most popular college sport in the country, so their attendance numbers are going to be OK, for the most part. However, very few people, outside of the diehards, will tune into the BTN on a Tuesday night to watch a basketball game against Indiana. The tradition that permeates our football team just isn't present in basketball. There are little to no expectations out of the casual fan, and little to no identity of the basketball team to the casual fan. I would wager my law school loans on the fact that few casual fans could name more than four players and the coach.

KHD: One of the things that makes football great is the tradition and pride. There's no tradition or even much pride when you look back at the full history of Penn State basketball. It's also less of an event than a football game, so getting people to a go sit and watch a poor product that doesn't include a four hour pre-party isn't much of a pitch.

What level of consistent success does the team need to reach visibility?

Junny: This is a tough one; as a casual fan, my first response is to say national championships should always be the goal. But as a realist, I know that Penn State basketball, outside of a really fluke season, is never going to be mentioned in the same breath with Duke, Kentucky, UNC, etc. So success should be relative. Consistent NCAA appearances, a B10 title run every now and then, and victories over teams that are, on paper, better than we are (see MSU in '09) would be a good place to aim for in the near future. If Penn State were consistently making the Big Dance, I might watch a few more games to see what the hype is all about.

KHD: I don't think the bar needs to be very high, so I'll settle on pre-season expectations of at least being able to compete for a Big Ten championship. If Penn State had a 50-50 chance of winning all or most of their games, well people might think that worth watching. NCAA appearances are nice, but I would argue consistent 5th place finishes in the Big Ten, even with, say, making the tournament 3 out of 4 years, isn't actually all that interesting. You have to win something every once in a while (and I don't think the NIT qualifies here, at least not going forward).

What are your feelings toward Spanier, Curley and the administration's handling of the basketball team? Or more specifically, do you think the administration is keeping the status quo because it is a money making venture, rather than living up to the adage "you need to spend money to make money"?

Junny: I'm going to take the safe road and say a little bit of both. Spanier and Curley know that the goal of any athletics department is to make money. Luckily, we have an extremely profitable football team that helps the entire athletics department stay afloat. However, as a school with more-than-40K students, we should also be competitive in basketball, or at least as competitive as some other comparable schools that are successful in both sports (Ohio State). As a casual fan, I don't know what amount of money is generated by the basketball program, nor do I know how much is put back into it for general basketball operations. So my answer is both: Spanier and Curley seem to be making money off this team without putting enough back in because it seems to be safer to keep a steady upward trending profit line as opposed to risk hiring a better paid coach with better resources but that might not pan out.

KHD: They are taking the safe money, which might be smart if your goal is to run a successful business, but it's certainly not the best formula for winning games. Spending money to make money is risky, and I can appreciate that, but having one of the five or so most profitable ADs in the country and then a basketball coach making less than all ten of his in-league colleagues seems cheap at best, and it certainly doesn't give off the impression that they care.

Penn State football is spoiled in that they have a winning tradition and are led by a staff that "does it the right way." If you could only pick one of those for the basketball team, which would it be - would you rather keep Ed and have mediocre seasons, or get a bigger name with established recruiting practices but sacrifice the "right way"?

Junny: Penn State prides itself on a great education with a great football tradition led by a man that is as revered in his field as one could possibly be (hell, they named a Coach of the Year award after him). So we get winning football without having to duck ethical and moral discussions because we toe the line. However, pressed to pick one of these for our Penn State basketball team, I will always go with "the right way." I will sacrifice the wins that a Calipari-type coach will bring if it means keeping Penn State out of the headlines for all the wrong reasons. Does that mean we're destined for mediocrity? Not necessarily, as there are ways to win with honor in college basketball; but for this casual fan, I don't ever want to see a coach, in any sport, that makes us as fans need to make excuses for certain actions within the program.

KHD: I have no interest in a program involved in shenanigans, and no line of work involves as much of that kind of fun as basketball recruiting. You add in the one-n-done rule, which prevents a decent basketball player from ever becoming anything close to an actual student, and the whole thing just stinks. I'd much rather have the status quo than occasional Final Four appearances with baggage. But I think we can both agree it doesn't have to come to that.