Icers Do Some Earlier-Than-Expected Planning for Next Season

Share All sharing options for: Icers Do Some Earlier-Than-Expected Planning for Next Season 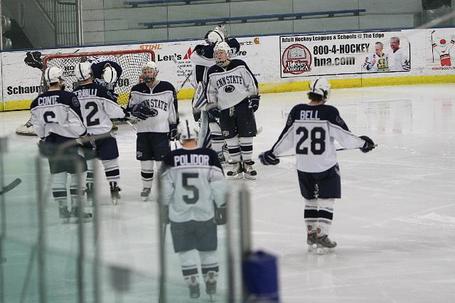 Because it's moping week here at BSD...

After a week to recoup (and a few days to find the time to write), I've finally gotten around to writing the final recap for the Icers. It was a solid season overall, with some great moments to boot. But a quick exit from the tournament overpowers the good from the regular season. So onto the recaps we go.

Tournament Recap: Let's just put this under the category of "learning experience" and move on. The first game was a microcosm of the season - toyed around with a far inferior opponent before unleashing the offensive juggernaut. SUNY-Canton would take a 3-2 lead early in the 2nd period, and that apparently was what it took for the Icers to wake up and play. From there, the Icers would score 5 unanswered goals and head to second round with a 7-3 victory.

Then came the second round against Central Oklahoma. It was a game I feared, because both Oklahoma and Central Oklahoma were going to be strong second round opponents, and UCO was riding some big wins heading into the tournament. As for the game, Taylor Cera would put the Icers up early - 2:12 into the first period early. And that would be the only goal until UCO would tie the game with just 1:29 left in the game. A turnover in OT (which was the result of the right play, but just a bad bounce) gave UCO the opportunity to score, and score they did, ending the game, and the Icers season, early in OT. Kudos to UCO goalie Justin Sgro - he stood on his head during the game, including a huge save on Tim O'Brien late in the 3rd that would have given the Icers a seemingly insurmountable 2-0 lead at that point. For his efforts, Sgro was named to the All-Tournament team.

As for the rest of the tournament, Lindenwood would beat Central Oklahoma in the semis, and then defeat Iowa State in an otherwise uninspired final, winning 2-0. Lindenwood is the first team to win back-to-back championships since the Icers did it 4 times in a row from 2000-2003.

Other News/Notes and Looking Ahead: Three Icers were named to the ACHA All-Star game: John Conte, Tim O'Brien, and Teddy Hume. That game will be held this weekend at Adrian College. All three had great seasons, and are very deserving to represent the Icers.

While a second-round loss leaves a sour taste in the mouth, there's still a lot to be excited about for next year's team. The four seniors leaving (Conte, Kirstein, Paradis, Thurston) take a good amount of offensive and defensive talent with them, there was some great bright spots from the younger players as this season progressed. There were 9 players with 30 points on the season, and only one is a senior (Paradis). Chris Cerutti had a good freshman campaign, and then followed that up with a great sophomore year with a blistering hot final month to the season. Nick Seravalli and Paul Daley were a bit more quiet their freshman year, but both were much more visible and important in their second year with the team. Add to that the great production from freshmen Dominic Morrone and Eric Steinour, and the offense looks extremely scary for next season.

On the defensive side, three guys really stood out to me: Rich O'Brien, Dan Loucks, and Dan Petrick. Rich had a great freshman campaign with 21 points and a +32 rating, which was only behind Steve Thurston's insane +45 rating. Loucks only played in 27 games, but still put up 15 points and a +30 rating. Dan Petrick's numbers (8 points, +15 rating in 34 games) might not be as flashy, but he played some of the most sound defense of any player on the blue line, seniors included. Getting offense out of your defense is great, but I'll always take a guy who is going to keep shot totals and turnovers to a minimum.

As for the goalies, all three will return next year, although John Jay is looking more and more like the odd man out. Teddy Hume is only 14 wins away from the Icers career record for a goalie, and freshman Dan Ivanir played extremely well in the situations he was thrust into. That's not to say anything bad about Jay, who always played well in his time on the ice - heck, the guy has a 9-0-0 record, with one shutout in his career at Penn State. It's unfortunate that there is such a logjam at goalie right now, but it's a good problem to have. So, there's a lot coming back next season, and there's no reason to set the goals to Murdoch Cup or Bust!

Let's pillage the ACHA! Or something... I dunno - I just like it.

And the Lady Icers...  The Lady Icers went to their ACHA tournament as big underdogs, and the tournament played out as much. The ladies had the unenviable task of taking on Robert Morris (IL) and Rhode Island in the first two games of their group stage. They played very well in both games, but came away with a pair of losses, 3-0 and 5-0 respectively. The turn-around between the 2nd game against URI and the 3rd game against LIberty was a matter of hours, as both games were played on Saturday. But the Lady Ices bounced back well, doing some shutting-out of their own, beating Liberty 1-0, giving them a final placement of 6th overall. Considering this team was struggling to field a full roster just a couple years ago, this is a great sign for the program.