Yes, it's time. The smoldering crater that is the Penn State men's basketball program is, until further notice, directly in our collective rearview mirror as we look ahead toward our one true love: dissecting spring position battles that are likely to look substantially different when Youngstown State comes knocking on September 4.

Of course we're looking at quarterbacks first. They're a group of very young, very talented signal callers who have an opportunity to nail down a starting job for three or four years. 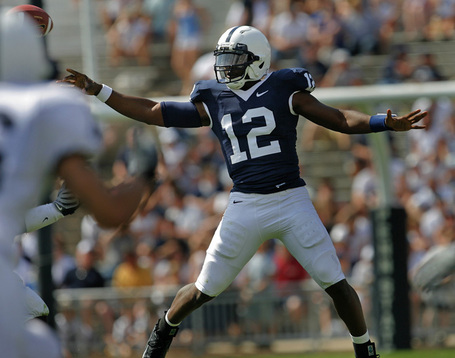 #12 Kevin Newsome - SO 6-2/220 - Played sparingly in ten games as a true freshman last year, mostly while Penn State was running out the clock in the fourth quarter. Newsome ran 20 times for 121 yards and lost a total of 26 yards on a variety of comically disasterous plays, for an overall average of 4.8 yards per carry. He also scored two touchdowns on the ground. Newsome's legs have never been the issue, though. Can he throw the ball? Count us as firmly undecided on that one, although he did complete 8 of 11 passes for 66 yards last season. His longest completion was for 14 yards. Newsome is the solid favorite to be the starter in the fall unless he struggles mightily and one of his backups vaults over him. With an army of capable RB's at his disposal (Royster, Green, Suhey, Curtis Dukes) and an emerging group of wide receivers, Newsome will at least have plenty of talent around him.

#11 Matt McGloin - SO 6-1/204 - "Little Red" is a walk-on from Scranton, and appears to be on track to be the Paul Cianciolo of his little Penn State generation. McGloin appeared in two games last year, throwing two incomplete passes. He may be able to provide the Trent Dilfer style of "just don't lose the game", but counting on him to come off the bench and shred opposing secondaries is rather ridiculous. Still, by all accounts he's a good guy to have on the practice field and in case of emergency on Saturdays. Not sure if he can hold off his freshman competition should something happen to Newsome.

#10 Paul Jones - FR 6-3/220 - One of the crown jewels of Penn State's most recent recruiting class, Jones was a five-star recruit from the Pittsburgh area. In terms of running styles, he bares more of a resemblance to Daryll Clark as opposed to the much more elusive Newsome. That's not to say he's Drew Bledsoe in the pocket -- he has more than enough athletic ability to keep a play alive and gain some yardage when things break down around him. As a passer, he's one of the more refined quarterback recruits Penn State has seen in a while, Pat Devlin excluded. Jones enrolled at Penn State early, which gives him a chance to learn the playbook and experience the rigors of major college football sooner than his true freshman quarterback counterpart...

#XX Robert Bolden - FR 6-4/205 - Bolden hasn't enrolled yet, hence the lack of jersey number. Bolden is the lesser-known of the incoming freshman quarterbacks, but don't sleep on him. He's regarded by some as a better pure passer than Paul Jones, and impressed many scouts at last summer's Elite 11 camp:

He is a better passer at this juncture mechanically than Michigan State verbal Joe Boisture. He's not quite as good an athlete and hasn't showed the same type of production that Michigan verbal Devin Gardner has. But he has one of those real flexible releases. He seems to be able to bend (his arm) in almost any direction and release from all different angles with velocity. He's one of those guys that looks like he just whips the ball around and is able to get something on it no matter where he is throwing it from.

Bolden has had an excellent summer. Every camp he has gone to, he has been impressive. There seems to some misconception about his style of play. I think the Elite 11 and other camps have shown that he is a polished quarterback who can stand in the pocket and make all the throws. Yes he can throw on the run and he can escape the rush and make plays with his feet, but he is much more of a passer than runner.

#16 Shane McGregor - SO 6-1/197 - Preferred walk-on from Central Cambria H.S., who had previously been considering schools like Harvard, Princeton, Duquesne, and Georgetown.