Wait, kickers?  You get us ready for prime time with a quarterback review and then move right to kickers?  Well, you know what?  The kicking... 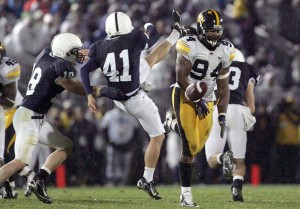 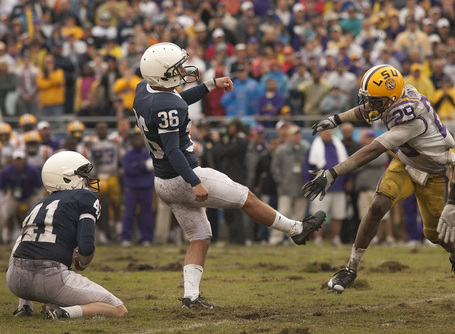 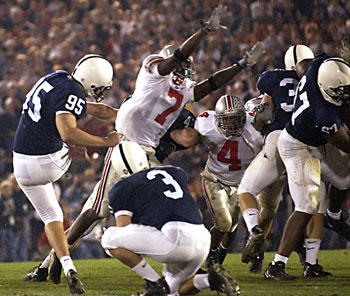 #36 Collin Wagner - Wagner was perfect on extra points last year, hitting 46 of them to add to the three he hit in 2008.  His range extended from that spot, though, begins to suffer with each yard. 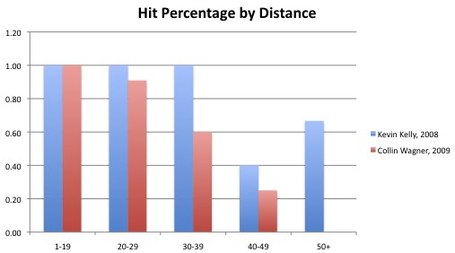 With Kevin Kelly now the standard, Wagner's numbers pale mightily in comparison.  For a coach who is a fan of small ball and field position, a 25% clip from outside 40 yards, and no shot at anything outside of 50 means more punting than is healthy.  This puts Penn State in a difficult position any time they cross the 40 but don't reach the 25.

Still, Wagner had the job last year and it's likely his to lose.  Enter scholarship backup...

#30 Anthony Fera - Kickers aren't usually celebrated as recruits, and so that make Anthony Fera's decision to shun Michigan for Penn State kind of strange in that anyone cared.

We expected to see him last year, actually, but Wagner got the nod.  Fera puts away his readshirt this year and will be available in case of default, and it also means we're probably due for a little more variety at PK this season.  Wagner sits as the favorite if only because the nod goes to precedent, however I suspect this is about as open a competition as you'll see on a Paterno team.

#28 David Soldner - Soldner is also in the running, and getting the default inclusion based on Joe's "it's anyone's job" routine.  Picking a kicker without any real-game appearances to compare them is like picking a golfer based on how well the range guy thinks everyone is hitting the ball.  Maybe we have three guys who are all in the running, maybe not.

The Likely The Lurking The Potential Disaster

This was all much easier when Ryan Breen was still with the team.  Of course no one has said he officially out--his profile is still on the team's website--but because not one shred of hearsay suggests he's back, it's best to assume for now that he is not.

And with that it's on to more speculation.  All of the sudden, with no one down the line except a State High walk-on named Russell Nye, the future depends heavily on the place kicker shakeout.

If Wagner keeps the PK job, it seems unlikely he would also have to punt, in which case Fera appears to be the most likely candidate.  This is all under the assumption that Soldner, who we know very little about, isn't capable of punting--and who's to say he isn't?

Feel free to make up whatever completely arbitrary situation you please, because there is almost no information to trade on here.