Share All sharing options for: Big Ten Expansion Heats Up 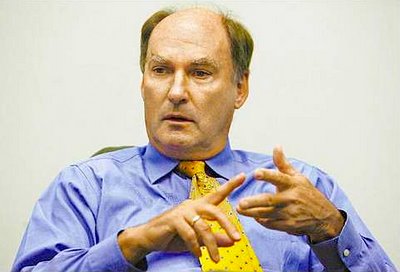 Jim Delany pauses for a moment from formulating his
evil plan when he detects a whiff of money entering the room.

There for a while we were covering the Big Ten expansion topic hot and heavy telling you about every juicy rumor we could dig up from the dregs of the internet. That was until the Big Ten announced it was going to be an 18 month process at which time I decided we wouldn't chase any more rumors until something definitive happens.

While I have nothing definitive to report this morning, there evidence to suggest things are moving more rapidly than we were originally led to believe.

Remember the talk that the Big Ten would take 12-18 months to decide whether to expand?

An accelerated timetable has emerged, according to sources familiar with the process.

High-ranking Big Ten representatives will meet Sunday afternoon in Washington D.C. to discuss expansion. The timing and location of the session make sense considering the Association of American Universities is holding its semi-annual meetings in D.C. from Sunday-Tuesday, and all 11 Big Ten schools are AAU members.

Among those attending will be Northwestern President Morton Schapiro, according to a university spokesman, and University of Illinois interim chancellor Robert Easter.

If the league can emerge from the D.C. meetings with a mandate to expand, commissioner Jim Delany could take a substantial step next week at the annual BCS meetings, outside Phoenix.

Insider comments in recent weeks have shifted. Originally, the message was that the Big Ten was going to explore expansion. Lately people in the know seem to suggest that expansion is a foregone conclusion. It's going to happen. The only question is whether the Big Ten will expand by one, three, or five teams.

I'm going to assume the mandate is there to expand. I think everyone in the league recognizes the Big Ten Network is a tremendous success, and it has yet to reach it's full potential. The goal now is going to be getting the network into as many U.S. households as possible. That means expanding outside of the existing footprint.

I'm not going to get into discussing potential candidates here. We can do that in the comments, or you can go to any of a dozen other sites to talk about it. When we hear something definitive we'll put it up here. But you might be interested to hear how the process may go down courtesy of ESPN's Adam Rittenberg.

Here's a step-by-step outline of how the process could work:

So there you go. Jim Delany could notify the heads of the other conferences the Big Ten plans to raid as early as next week. Expect the rumors to start flying everywhere. It should be fun to watch. I can see some schools, like Rutgers, letting it leak out that "Yes, indeed, we are joining the Big Ten," only to have some Big Ten presidents say, "Uh, not so fast. We haven't voted on anything yet." And of course South Bend will probably implode into civil war if anyone suggests they are about to give up their independence.

It's going to be a crazy summer. The stakes are high, and rumors are going to fly. When things start going down it's going to create a domino effect, and a lot of people are not going to be happy about the situation. Right now, nobody knows what it's going to look like on the other side of the rabbit hole.