Share All sharing options for: Nitt Picks Thought Hustle Meant Something Else 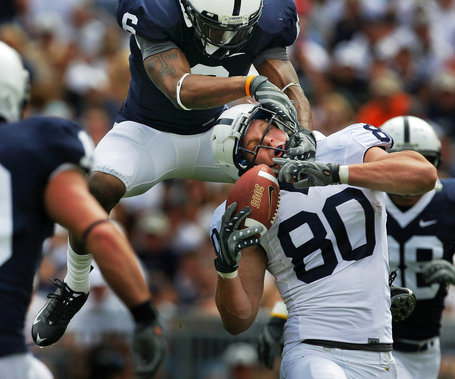 It's like the combine, only less telling.  Penn State is just a couple of short days away from scrimmaging in Beaver Stadium, and I'd like to take a moment to remind you that they are scrimmaging, with a little help from our old friend Aric Heffelfinger:

[Aric Heffelfinger] finished as the Nittany Lions' leading rusher [in the 2002 Spring Game], ahead of Johnson (seven carries, 29 yards), who had the starting job all locked up. He outperformed two other reserve running backs who had Penn State pedigrees -- Mike Gasparato, son of a former Penn State assistant coach, and Pete Gilmore, whose brother lettered for PSU.

Heffelfinger hoped bigger things would follow. "People told me that game alone should have gotten me a scholarship or an opportunity to play," he said.

Neither happened. In the 2002 summer preseason camp, Heffelfinger hurt his ankle. He wanted to hurry back, but the reins were pulled in. Why rush? L.J. was just leaving the station on a 2,087-yard journey that left Heffelfinger on the sidelines.

Twice Heffelfinger carried the ball, losing a yard in the process. "The numbers weren't that good," he recalled.

Heffelfinger is now in the middle of a successful architectural engineering career not far from where I'm typing this, and good for him. But remember this story when you read through the final "stats" on Saturday.

Hitting close to someone's home. No one likes news like this:

Ohio State football recruit Jamel Turner was shot over the weekend in the Youngstown area, a source very close to the OSU program confirmed.

I'm not sure how this would read to Daryll Clark, who graduated from the same high school Turner was kicked out of.  I suspect he feels pretty good about where he is now, which is in Jay Paterno's basement and, just maybe, a part of this week's NFL draft (check in here for a Thursday night open thread, by the way, and speaking of...).

Mock Odrick.  Penn State has just one guy looking to have his name read during Thursday night's round one coverage, and most suspect it will happen in the final third of the evening. A quick search says to look for everything from the Jets at 29 to the Ravens at 25 to the Pats at 22.

A quick search will also give you an uncomfortable amount of Bleacher Reporter articles on the draft.  Remember that you don't read Bleacher Report because, no matter how good they are at SEO, you're better than that.

Not the same thing as Penn State hustle.  You might have noticed in yesterday's recruiting roundup (with maps) that Penn State football does well in part because of their reach into the greater NYC area.  You might then wonder why we can't go after the top basketball recruits in that area:

There is a notion that it is difficult for a college in the [NYC] metropolitan area to win without currying the favor of youth coaches in the region. It is a notion that coaches themselves like to perpetuate. Russell Smith, a coach with the New York Gauchos, an Amateur Athletic Union program, said Roberts and his staff had been "too laid-back" in their local recruiting efforts.

"You got to hustle here, bend some rules or do something," Smith said. "They settled for the transfers and second-tier kids."

Kenny Wilcox, the head coach at ASA, a junior college in Brooklyn, said St. John's had been foolish to think it could win without bending the rules.

That's an AAU coach, who in a lot of ways controls the destiny of many of the top players on his team, telling the New York Frickin' Times that you can't recruit his kids, or any of the kids on teams he coaches against, without breaking rules.  It's no secret that basketball recruiting operates on a level of shadiness beyond what any reasonable person should be comfortable with, but it is kind of surprising just how blatant the characters involved are in admitting it.

In scores of other games.  This might be Alabama's "best offense ever"...Citrus Bowl is getting fake grass, which is about the only time I'll approve of such things...Bowman is all growns up.