Who Will Fight For The East?

Share All sharing options for: Who Will Fight For The East? 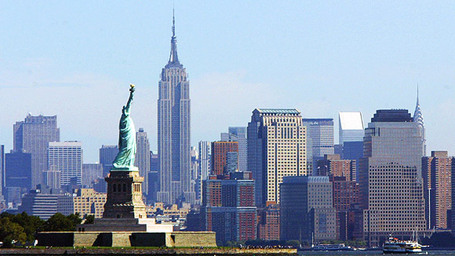 That hasn't rung true in the posts and comments of this blog, which is a testament to the fact that State College is really not very Midwestern.  The recruiting outside out of state is focused almost entirely east and south of the campus, and well over half of the student population has never once claimed to have "bought a new pair of tennis shoes."

And so the east, in the context of expansion, is in the uncommon position of being under-covered and under-considered:

Thus--and we realize some of this is some Central Time Zone bias, but bear with us--here's what we'd like to see the Big Ten accomplish in each scenario:

[he lists a bunch of Middle America schools, and at the very end, Pitt]

Am I advocating that the conference turn their back on the NYC plan? Yes. Promixity alone does not guarantee success in a New York market that is utterly dominated by professional sports.

The concern about New York City is a valid one, but I suspect the concern has a lot to do with the indifference that goes with sitting 1,000 miles from The Big Apple.

The funny thing about the eastern schools is that not a single one of them seems to really care.  They don't reject the inevitable a la Notre Dame fans -- probably because they actually have a realistic grasp on reality -- but even the phrase ‘reluctantly going along' seems to suggest more enthusiasm than is actually out there.

Interestingly, just about all of the Eastern Blog Bloc begin their discussion of expansion with a quote or reference to Paterno.  Most of it is not exactly cheery:

Sure, JoePa may look innocent, but he (and the rest of the Big Ten) may be coming to destroy the Big East.

Joe is the face of eastern expansion, as perfectly characterized in TNIAAM's Patern-o-Meter: 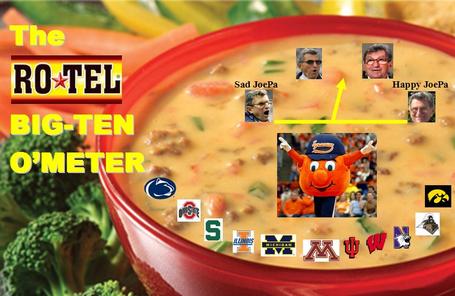 Back to the UConn, blog, they sum up the eastern perspective on expansion quite nicely:

As far as I'm concerned, the best case scenario, and the one that almost certainly won't happen, is for he Big Ten to steal Notre Dame away from the Big East, turn into a 12-team league and call it a day....There is also the chance that the Big Ten goes on a raid in our backyard but doesn't grab the Huskies. In that case, they'd probably make a move for Pitt, Rutgers and 'Cuse, which, hopefully, would leave UConn to be snatched up by the ACC. I know that sounds like anathema, but in a lot of ways, it would be my preference, especially if Cuse didn't go to the Big Ten and jumped to a new super-powered ACC instead.

That's right, the ACC has more to offer — despite it's lame showing in football the last several years — than the Big Ten.  Maryland agrees: 64% of the fans in this poll wouldn't even be interested in listening to the Big Ten's offer; only 13% actually think it's a good idea.

I’ve read so many different scenarios based on expanding with or without ND. Expanding by 1, 3 or 5 teams. Pitt — depending on the person doing the ranking and their biases and values on various aspects — places anywhere from the most attractive candidate after ND and Texas (and Texas A&M) to the least. There are kernels of logic and reason in them, but I don’t think anyone truly knows how the Big 10 is going to make this decision. I’m also not as worried. If they only go one and it isn’t Pitt, the Big East survives. Even if it would be Rutgers or Syracuse. The loss isn’t that drastic. If the Big 10 goes to 14, and Pitt wasn’t one of the three, I’m nervous but I also think that the Big East could make it or the ACC would look to expand and Pitt would be a top choice. Is the ACC as lucrative as the Big 10? No. But it would be more stable and more lucrative than the Big East. Even if the Big 10 went all the way to 16 and still Pitt was left out, then definitely the ACC would be expanding and Pitt would be in there. Really, I think that Pitt will be okay. It is the fate of the Big East as a football conference that is at stake.

And part of the reason the Big Ten doesn't sound so attractive?  Well, look at the "joke" that is Penn State athletics:

Make no mistake though: there is a miniscule chance of any of this happening. Rutgers is a member of the Big East, will continue to be a member of the Big East, and most importantly, belongs in the Big East. It's a joke that teams like Penn State and Boston College play outside of their geographic footprint. By computer models, Big East football has actually been stronger over the past few years, which makes me chuckle a bit when Penn State fans mock Rutgers and the Big East [We mostly mock you because of your hilariously pitiful history as a football team, but now we are straying from the point. --ed]. It's been a lousy football conference ever since Michigan went to hell, and the notion that any Big East team (well, maybe Cincinnati) would instantly jump at a conference invitation demonstrates a profound level of unfounded arrogance.

To be fair, that's a year-old post — and while the chance of change for Rutgers and the Big East is now a serious threat, I doubt the sentiment about being an eastern school in a Big Ten has changed much.

What they are probably failing to see, though, is Joe Paterno's Vision.  No, Joe didn't get his eastern football conference the first time around, but Big Ten expansion represents a second shot at that.  Sure, the Big Ten is historically based in the Midwest, but adding three teams east of Ohio make it a northern football conference, and the issue of playing out of your "geographical footprint" is all of the sudden a non-existent problem.

That reality aside, the general theme is this: the Big East, despite is double-headed structure and talked-down-on football reputation, is actually pretty well liked by the relevant football members.  That, and it invokes a lot of basketball pride.  That basketball pride is making most of the top basketball programs throw up a little in their mouth when they think about playing a Big Ten schedule that doesn't include their current rivals.

It's so bad they aren't even bothering to explain their reasoning.  It's just that obvious:

Going to the Big Ten would make sense for Football. It would be rather tempting to see Ohio State, Michigan, Penn State, Iowa, and Michigan State on the schedule every year. Teams like that coming in year in and year out may help attendance at the Carrier Dome just a tad. For basketball, it makes zero sense. I don't think I have to really go into why.

The attachment is kind of strange because no one will gain as much from all of this as the Haves in the Big East that aren't left standing on that sinking ship.  And make no mistake about it: the Big East has been a sinking ship long before Big Ten expansion rumors hit mach 3 this offseason.

The out-of-touchness we might be feeling now is going to swing heavily one way or the other.  We either add a couple of eastern teams and end up insulated by high-density states: 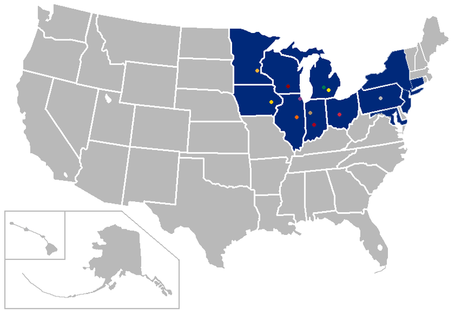 Or watch the Midwestern influence in Chicago further alienate us from the center:

No one is fighting harder for that first map than Paterno, and there isn't a close second.  Big Ten fans outside of the Keystone State have no interest in making a grab at New York City, and the schools surrounding the nation's biggest city seem more interested in playing Villanova in basketball than Iowa in football.  The Big Ten will double or triple their revenues, and yet the fans still don't seem to care.

But none of this was ever about the fans.  New York City is a prize Delany would very much like to hand off to the presidents, and the Big East members have no choice but to listen...despite what just about everyone except Paterno and a large portion of Penn State fans actually want.