Share All sharing options for: Nitt Picks Can't See You Standing There

I believe "freshman" is an old, old wooden ship that was used during the Civil War era.  Even though Joe's aversion to first-timers is often overstated, it's looking more and more like Newsome and McGloin are the front-runners.

There was of course this from our recap last week:

"Freshmen? I don't even know they exist," Paterno said ... "You can't count on them. You want to go all the way down to Tuscaloosa with freshmen?"

...suggesting that Newsome and McGloin are probably getting the most snaps, the most attention, and therefore most of (all of?) the consideration for "Tuscaloosa."

The one thing Joe does more often than outsiders realize is use his pressers to motivate his players. He is notoriously negative, and most of the time it seems a way to check the confidence of his team.  This makes JoePa pressers very difficult to pull value out of, but at the same time there is some writing on the wall.

Did you know?  Penn State has the 5th longest streak in the AP? 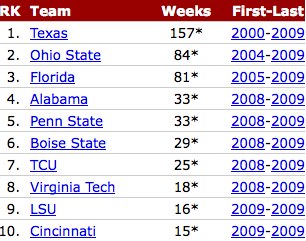 Texas and Ohio State continue to be the model of sustainability dating back to around the time they scheduled a home-and-home series with each other.

Because we hear about the same teams so often, the surprising thing here is probably how short these streaks run.  Only eight schools were able to finish in 2008's final poll and stay in the top 25 throughout 2009.  Only three schools date back over two years.

For all the talk about it always being the same teams, there is a deceivingly high amount of rotation going on in the top 25.

Spend money to get that money back.  The USA Today is on a budget tear, collecting large amounts of data without any context and drawing (often hilariously wrong) conclusions about it.  I found this hidden graph interesting is a story about, amongst other things, highly successful guys like Tom Izzo taking home what the market will bear:

According to several studies, including one co-written by the now-White House budget director Peter Orszag- in his previous life as a Brookings Institution fellow - for every $1 a school pays to build its athletic program, it gets $1 back in new revenue. In other words, with rare exceptions, spending more on a football or men's basketball program does not yield increases in alumni giving, net operating revenue, winning or academic quality.

It's the USA Today, so there's no depth or context to anything they say, but if there was we might consider Curley a Orszag reader.

I've found what is probably the report (in PDF) here, which is vague, uses data from 1993 to 2003, and spends an uncommonly large amount of time claiming that data might not be all that good in the first place.

There basic belief, though, is pretty simple:

[W]e continue to find that many widely held perspectives about spending on big-time sports by colleges - by both proponents and opponents of such spending - are not supported by the statistical evidence.

They spend most of what precedes that suggesting there really isn't any proof the "spend money to make money" idea holds any water.

In scores of other games.  An interesting look at the battle between old and new media happening in State College, Pa., fought on both sides by kids who can't buy beer; and this seems like garbage to me.