Defending The East: The East Weighs In

Share All sharing options for: Defending The East: The East Weighs In 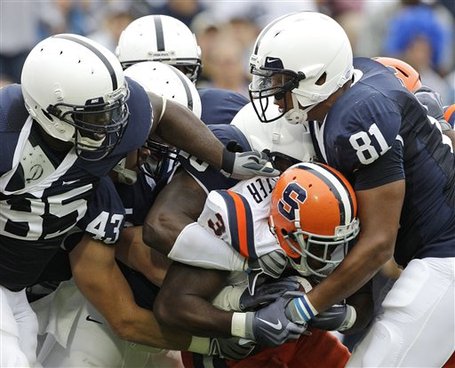 When we last looked at the east and what they had to offer the Big Ten, we came away with this second-hand conclusion:

No one is fighting harder for that first map than Paterno, and there isn't a close second.  Big Ten fans outside of the Keystone State have no interest in making a grab at New York City, and the schools surrounding the nation's biggest city seem more interested in playing Villanova in basketball than Iowa in football.  The Big Ten will double or triple their revenues, and yet the fans still don't seem to care.

I just wasn't feeling it from the Big East bloggers, which act as my main pipeline to Big East fans.  Well we now have first-hand comment, and the opinions have, well, evolved I guess.

On the Banks, Pitt Blather and TNIAA have joined up for a three-part roundtable about Big Ten expansion.  The general tone is still apathetic compliance, but the details are interesting, and the inevitability of something seems more clear.

1. Assuming your school is a definite invite to the Big 10, how many more invites do you want to see issued?

All three bloggers agree: go big or go home.  They realize the Big East is probably dead in the water, and so they want to have their cake and eat it too: give us to the Big Ten, fine, but we're bringing our low-revenue friends with us.

Through it all, though, reluctance is still strong:

TNIAMM: No. I don't want to go to the Big Ten in the first place but I realize that it's probably the "right thing to do" if we get offered. The Big East just hasn't done enough to warrant staying and their efforts over the last month are too-little-too-late.

I'd much rather stay in the Big East where we have historical rivals, rivals that make sense geographically and know exactly what we're getting. If we jump to the Big Ten, the SU football reclamation project just got 10x harder than SU basketball just traded Villanova and Georgetown for Minnesota and Northwestern.

But, like I said, if that's the option on the table you have to take it. For better or worse. And the millions of dollars we get from the Big Ten Network will certainly help us sleep at night.

You're trading Villanova and Georgetown for Ohio State and Michigan State, but I understand the sentiment, and they still probably don't like that trade.  Which is where Pitt gets hesitant as well:

PB: Well, outside of Pitt and Penn State playing each other, I really can't think of one.

OTB: Whatever problems there were with Joe Paterno's proposal, it should have been accepted. Once lost to the Big Ten, Penn State will never come back across that rubicon, and the Big East's future is not viable without a traditional power as an anchor. It'll always be vulnerable to raid.

It's not that Penn State necessarily left the rubicon, it's that they might have actually moved it.  Penn State fans often thinking of themselves more as a half-Midwestern school than a pure eastern one.

All three have two things in common: A dedication to at least some eastern colleagues, and wanting Penn State back on their side.

Well what about us?  None of the above proposals appear to be very exceptional in comparison with what Penn State already has.  You get one thing that satisfies about half of us: the renewal of the Pitt rivalry, but in the all-eastern proposals you give up a lot for this.

Even PB's suggestion, the most conservative of the three, means trading games against Michigan, Iowa, Wisconsin and so forth for games against the mediocrity of the east (as Penn State will almost certainly be paired with Pitt and Syracuse).  Of course mediocrity is relative, and to some the tradition outweighs the recent (say, 10-20 years worth) of success.