Share All sharing options for: Oh Yeah, I Hate Those Guys: Wisconsin

It's been almost five months since we've seen real college football.  In that time, you've forgotten more about your Big Ten colleagues than you even know, man.  Why were you so angry at Mark Dantonio?  What was up with that guy who threw the interceptions for Michigan?  And remember that one fat guy?  Time to get reacquainted with the enemy.  First, the teams Penn State won't play: Wisconsin and Purdue.  Because nobody gives a shit about Purdue, let's just skip them and take a look at Wisconsin.  Hate, hate, hate!

You May Remember Them From Such Games As...:  October 11, 2008, at Camp Randall Stadium.  Penn State doled out a 48-7 reaming of the Badgers, a game that provided us with this indelible moment: 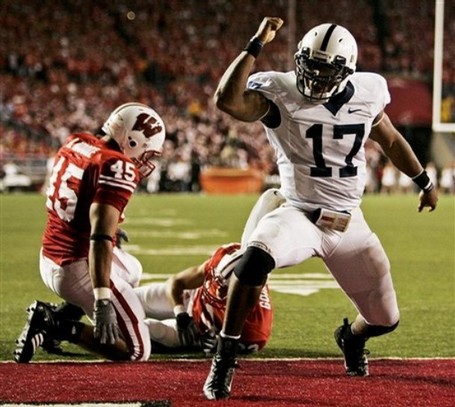 Unfair, Irreversible Stereotype:  Fat, festive, and shitfaced.  Forget the facts, which hold that Pennsylvania is a slightly fatter state than Wisconsin.  The state is known for beer, brats, and quadruple bypasses, regardless of the season:

Reasons To Hate:  Perennial Douche Of The Year candidate, Bret Bielema, who memorably exploited a rules loophole in the 2006 game between Wisconsin and Penn State, to the scorn of Joe Paterno and many other Big Ten coaches.  Aggregate score of PSU-UW games since that day?  Penn State 86, Wisconsin 14.  JoePa plays the old fuddy-duddy card to the hilt, but he'll always be a cut-throat Italian from Brooklyn.

Sole Redeeming Quality: A style of football that is just modern enough to be aesthetically pleasing.  Sure, Wisconsin is known for running backs who look like offensive guards, but they throw in enough play action passing -- usually with an annoyingly mobile quarterback -- to keep things interesting.

Last Season, In One Picture: 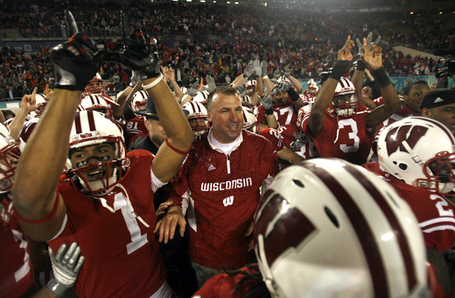 Wisconsin knocked off Miami in the Champs Sports Bowl, 20-14, a victory which seems to have propelled the Badgers toward the top of many pre-pre-preseason polls.  Lindy's has Wisconsin ranked sixth -- in the whole country!  Seriously!  Sure, they're returning RB John Clay, QB Scott Tolzien, and a bunch of other starters (10 offense, 6 defense) including their entire offensive line, but...sixth?

If Wisconsin Was A Character In Some Movie Or TV Show Or Whatever:  The King Of Town.  Occasionally relevant, always amusing.  Very hungry.

Threat Level, From Amy Grant To G.G. Allin:  They don't play Penn State or Illinois this season, which we'll have to call a net gain in Wisconsin's favor.  Overall, their schedule is rather favorable -- road games at Michigan State and Iowa are the biggest tests along with a home date against Ohio State.  The non-conference schedule is your standard bunch of jokers (UNLV, Austin Peay, Arizona State, San Jose State).  Wisconsin's combination of returning starters and passable schedule puts them at a threat level of LITTLE KIDS PLAYING SEPULTURA:

Oh sure, they're cute now.  Turn your back on them at your own peril, however.  One day, they're playing cover songs in their parents basement.  Next thing you know, they're running away with a BCS at-large bid in hand.