Share All sharing options for: Oh Yeah, I Hate Those Guys: Illinois

It's been almost five months since we've seen real college football.  In that time, you've forgotten more about your Big Ten colleagues than you even know, man.  Why were you so angry at Mark Dantonio?  What was up with that guy who threw the interceptions for Michigan?  And remember that one fat guy?  Time to get reacquainted with the enemy.  Next up, Illinois.

You May Remember Them From Such Games As...:  Well, there was the clinical 35-17 drubbing that Penn State dropped on the Fighting Zookers in Chambana.  PSU ran for 338 yards at a 8.5 ypc clip, and both Evan Royster and Stephfon Green went for over 100 yards.  But who can bring up Illinois without thinking back to 1994?

(Many college freshmen enrolling this fall will have been born in 1992, by the way.  Consider that.)

Sole Redeeming Quality: The bubbling fountain of comedy that is Ron Zook.  Whether he's waterskiing, macking in his Rolls Royce golf cart, or riding the tea cups with J. Leman, he brings us nothing but pure, unadulterated joy.  Miraculously, he returns as the Illini head coach, presumably because the new university president previously worked at Iowa and Ohio State, and views this as a rather sublime sabotage opportunity.  Well, not sabotage per se, but a hands-off approach in order to assure the further disintegration of the Illini football program, and society at large*.  Either way, nice to have him aboard.

Last Season, In One Picture: 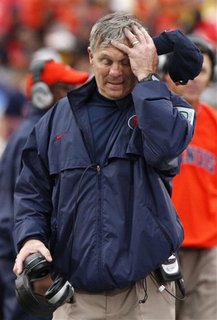 Yeah, there was a lot of this.

If Illinois Was A Character In Some Movie Or TV Show Or Whatever:  Dennis Reynolds, It's Always Sunny In Philadelphia.  Sure, Illinois always looks good and has a system, which inevitably fools many casual prognosticators.  However, for Illinois and Dennis, things always seem to end in a fiery heap of fail when the stakes are highest.  For Illinois, that meant back-to-back losses against Indiana and Purdue on the way to a 2-6 Big Ten record. 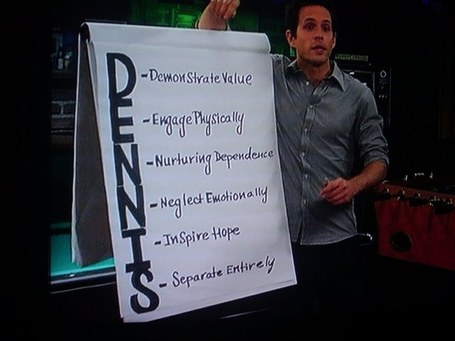 Threat Level, From Amy Grant To G.G. Allin: BELLE AND SEBASTIAN.  Sure, they get love from an annoying segment of the population, but the rest of the world doesn't take them all that seriously.  And they'll probably suck in 2010 just as much as they did in 2009.  And 2008.

* - This link added strictly as an excuse to link back to pre-BHGP.