It's not football, but it's football's kissing cousin rugby, and the Penn State women play it pretty well. So well in fact, they won yet another National Championship with a dominating 24-7 victory over Stanford in the final. 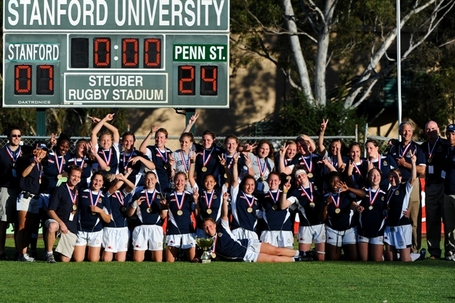 Winning is nice and all, but earning the admission of complete inferiority from your opponent tastes like sweet nectar.

"My prediction is Penn State will not lose in the next 12 to 15 years," Griffin said. "There is not a program that can compete with them now. They have 60-plus players to our 22. They have the full support of their university. Penn State is the Cal of women's rugby."

As the men's volleyball team prepares to head out west to also compete for a national championship, there's an interesting story in the CDT today about Tom Tait, the man who saved Penn State volleyball from extinction in the 70's and built the foundation on top of which the current powerhouse rests.

But it was a few years after that change that was most pivotal, when he received a letter in the mail from university administrators that scholarship money was being cut, all but eliminating the men’s team from varsity status.

As Tait recalled the incident, the letter arrived on the Friday of a road football weekend, and all the integral administrators had left town. Tait talked it over with his wife, then team captains, then the whole team, and they decided to put up a fight.

Very interesting read. Be sure to check that out.

Sean Lee is gettting settled into his new home in Dallas. From cruising the message boards and blogs, Cowboy fans are kind of freaking out that the team "wasted" a second round pick on a white kid from up north. Then when they found out he is playing with a knee brace they flooded the suicide hotline. But Lee is apparently making an impression on the Cowboy coaches.

"He is a very sharp individual," Herring said. "There is a lot to learn, but if anyone can learn it, it's him. He has excellent retention and we're slowly giving him a little taste at each position.

Finally, not that you didn't know this, but Cael Sanderson is tearing it up in recruiting.

"If you look at the teams around the country that are winning conference and national championships, you will see they do a good job of building depth in the (wrestling) room," associate head coach Cody Sanderson said Monday. "That’s what you want to do to win a championship."

FedEx is dropping out as the official sponsor of the Orange Bowl after 21 years. So they are looking for a new sponsor. Any suggestions?