Last night, while checking the mighty 700 Level for Philly sports news, I saw the headline, "Cops At CBP Officially Not Messing Around Anymore," accompanied by this supremely hysterical photo: 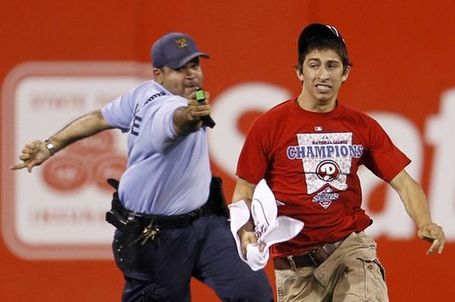 And, you know, ha-ha rioting Philly fans and whatnot.  In fact, the story prompted a Facebook friend to write, "people should be tasered just for being Philadelphia fans at a sporting event."  Fair enough.  But this kid's no simple Philly fan.  He belongs to all of us now:

"He wasn't drinking. He was not on drugs," said the father of the teen Tasered by police in the outfield at Citizens Bank Park last night.

Steve Consalvi, 17, is a senior at Boyertown High and "a real good student, heading to Penn State," according to his father, Wayne, 45, who owns Consalvi Auto Repair in Pottstown.

Steve even called from the park last night, asking for permission to run on the field, as the Phillies hosted the St. Louis Cardinals, the elder Consalvi said.

"This would be a once in a lifetime experience!" the son said.

Now, before we look at the video -- because we're going to look at the video -- let's make a few things clear to anyone in the Penn State admissions office who is thinking about overreacting to this incident.  First, he wasn't drinking or on drugs.  Second, he's a good student.  Third, he asked for permission from his father.  All the signs of a perfectly sober, scholarly, polite young man with a penchant for excitement and enough lateral mobility to avoid chubby security guards for a long enough period of time that a freaking taser had to be drawn to stop him.

Please don't be dicks about this, PSU admissions folks.  You have much bigger problems to deal with than this kid.