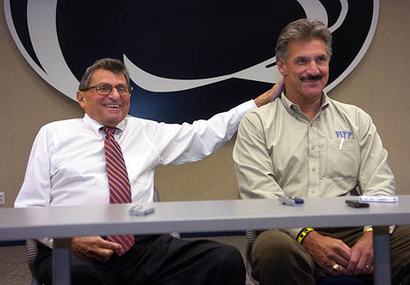 Did I ever show you my Pitt puppet? Say hello, Dave!

Yesterday out of nowhere it was announced that Joe Paterno and Pitt Coach Dave Wannstedt were holding a joint news conference. Like much of the local media, my head began to spin with the possibilities. Are they renewing the Pitt-PSU series? Not so much. Okay, well maybe we can get some juicy morsels on Big Ten expansion? Nope. Not today.

It turns out the two coaches were getting together to pledge their support for the renewal of the Pennsylvania Scholastic Football Coaches Association's (PSFCA) annual clinic and establishing spring practice for the state's high school football programs.

The PSFCA has proposed renewing its annual coaches' clinic and holding it on a rotating basis at Penn State and Pittsburgh, and possibly, Temple, in mid-February, after National Letter of Intent Day.

"I'm delighted that Dave and the coaches came up today to talk," Paterno said. "I'm really pleased with the (PSFCA) leadership. I think we ought to have a clinic that's a little bit more centralized, a little bit more predictable as to when we're going to have it, who is going to be involved in the presentation, whether we have some players that are going to be able to demonstrate and so forth.

"If we can have a clinic one year at Pitt, the next year at Penn State and get 4-5 of our coaches involved (from Penn State, Pitt and Temple), I think we can help, especially with some of the younger coaches and then build on it."

"Pffft. Big deal," you say? Not so fast, my friend. This is a very big deal, in my opinion.

Pennsylvania high school football used to be the cream of the crop. But in recent years, that amount of DI talent coming out of the Keystone State has steadily declined, and Penn State has been forced to raid Maryland and the D.C. area to get the talent they need.

Meanwhile, states like Texas, California, and Florida put out more DI talent than all the other states combined. Why is that?

Having lived in Texas for almost two years now, I can tell you that football is a huge deal here. I'm not just talking about NFL and college. I'm not even just talking high school football. I'm talking all ages. Drive through my neighborhood on any given Saturday morning and you see kids playing organized football everywhere. There are camps and leagues going on all the time. It's easy to see why Texas puts out so much talent.

So when I read about this meeting yesterday, I couldn't help but think that Pennsylvania is taking a major step toward upgrading the high school football talent level. Starting up spring football leagues and camps is going to help talent grow. And calling in coaches for clinics to teach them the proper way of doing things (read that as the Penn State way of doing things) ensures that these kids are prepared for the college game the day they step on campus.

Maybe it wasn't as sexy as renewing the Pennsylvania Classic or talking about Big Ten Expansion, but this effort to improve the high school talent level in the state of Pennsylvania is going to pay major dividends for Penn State down the road.