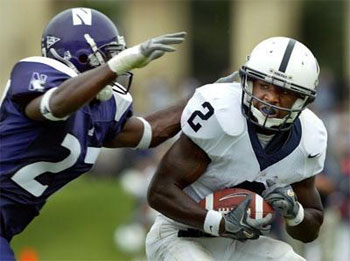 You may have heard something about this:

The university was put on four years' probation, while the football program was hit with a two-year postseason ban and the men's basketball team was banned for one year from the postseason, which had already been self-imposed by the school.

The football team must vacate all wins in which Bush played while ineligible, starting in December 2004. The NCAA accepted USC's self-imposed penalty of vacating all wins in which Mayo competed during the 2007-08 season.

Forfeited wins are only that: the other team does not gain a win and no other down-the-chain events are retroactively said to have occurred. Therefore what follows is fiction, but still interesting.

Penn State's 2005 season ended with a road game at Michigan State. Robinson had led the team to it's most successive in year, returning the program from the Dark Years and sat one win away from a Big Ten championship.

Penn State, before that final game, sat fourth in the BCS standings, behind pre-season favorites USC and Texas and one-loss Miami.

Penn State rolled in East Lansing. Then it go interesting. Miami, as 19-point favorites, fell to Georgia Tech. Later, LSU would fall to Georgia, eliminating any risk of them jumping Penn State as SEC champs.

USC fell behind Fresno State, down with under seven minutes to go. They would rally though, and the two teams who started the season #1 and #2 ended there as well. Penn State would finish third.

But what if USC failed to finished undefeated that season, which isn't hard to imagine if they were playing without Reggie Bush and runs like this one:

Well, you end up with Penn State going to the Rose Bowl to face Vince Young and Texas in the MNC game.

Would Paterno stand a chance? Well it's hard to say, really.

Longhorn schedule. Texas absolutely rolled the Big XII that year, routing every team in the league including Colorado, who they beat 70-3 in the conference championship game. But the second best team in the Big XII in 2005? Nineteenth ranked Texas Tech. Colorado, even as the North champion, didn't even receive votes in the final poll.

But they did have one tough game that season against guess who: Ohio State. Maybe Vince Young wasn't rolling in that game like he was at the end of the year, but Ohio State had excuses as well. There was the crucial dropped pass that led to some idiot Ohio State fans issuing death threats to the student-athlete. And one more thing: the Buckeyes Justin Zwick had 15 of the 21 attempts that game. Most of them highly ineffective when compared to the other quarterback, Troy Smith, who eventually became the full-time starter. They would finish that season ranked fourth overall, right behind Penn State.

LBU. In the infamous Rose Bowl game, Young downed the Trojans by being effective both in the air and on the ground—although mostly on the ground. It's where he scored all three of his TDs and where he averaged 10.5 yards per carry.

However, Penn State and their solid fronts have nearly always performed well against dual threat quarterbacks, in large part because of solid linebacker play. Penn State had both Posluszny and Connor on that team. There aren't a lot of shining examples to give here specific to 2005, but over time Penn State has defended against mobile backfields well. It's something to consider, especially when you take into account that they had been practicing against a very similar offense all year long. How similar? Well...

The wildcard: The Paternos visit Texas. This is where things get really interesting. Joe had been hurting badly after the 2004 season, both on the field and in terms of fan support. Mac Brown has been a friend of the great coach, and so Mac Brown thought he'd invite Joe and his staff down to Austin in the summer of 2005 so they could see how to use a mobile quarterback like Vince Yong. Penn State has Robinson to work with, and since Penn State appeared to present no threat to a Texas team aiming for the stars, I'm sure Brown thought it no skin off his back:

"[Texas coach Mack Brown] was gracious enough to allow me to send some coaches down and they went down there and visited," coach Joe Paterno said. "The Texas coach was very open about everything. We came back with some thoughts."

But man would that generosity have backfired. Getting a personal scouting report before the season with the team you'd be playing in the Rose Bowl is more than an advantage. It would have certainly helped level the playing field.

So what thinks you? Would Penn State of held their own, just 60 minutes from a Mythical National Championship in 2005?