Who's Any Good In This League, Anyway?

Share All sharing options for: Who's Any Good In This League, Anyway?

The next year and a half are going to be filled with speculation on how the Big Ten's new divisional alignment—which Delany "presumes" will be a part the 2011 season—will shake out.  This post is not part of that pile.

It is an attempt to gather some raw materials we'll need for the guesswork, however.  Delany mentioned three criteria: competitive balance, rivalries and geography.  That first one will likely be the most important.

College football does not operate on some kind of diversity-seeking salary cap, and so in many regards it's always been the same teams taking turns at the top, and mostly the same teams floating near the bottom.  Looking at what will lead to competition in the future means understanding the past.  And so, here's the past.

These are Big Ten records only, either in conference matchups or once between future and current members.  There are inherent issues with the data set, but there are plenty of issues with overall record as well, so we'll use this one instead.

The ranges I use below, with justification:

All winning percentages are said date through the present as leaving out present years is a waste of space when trying to predict future results. Feel free to attack my ranges; in hindsight a couple of things will seem attackable but are also justifiable (1980 is arbitrary, and the five year window happens to cut out the Dark Years).

Getting on with it...

And in chart form: 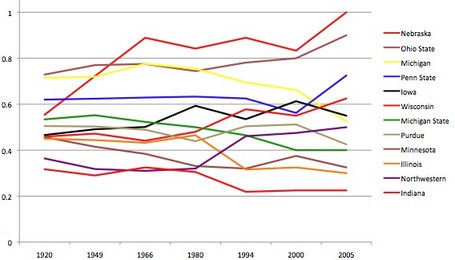 Sample size obviously decreases as you move right, and in the case of Nebraska is totally worthless once you hit 1994—the Huskers have played just nine Big Ten games since then.

Another thing to consider when you look at Penn State trailing Ohio State and Michigan over the long haul: the Nittany Lions are being significantly punished with this method.   While Paterno played quite a few games against Big Ten opponents before joining, it's disproportionately against the best teams in the league, and almost never against the worst ones.  Penn State's Big Ten opponents, 1966-1993: Illinois 2, Indiana 1, Iowa 9, Michigan 1, Michigan State 2, Minnesota 1, Nebraska 5, Northwestern 1, Ohio State 5, Purdue 0, Wisconsin 1. This is 20 games against the top 4 teams not including Penn State and just 5 against the bottom 4!

So while Ohio State and Michigan sport better winning percentages during the mid-1900s, it's in part because they're padding the record with annual games against bottom feeding teams like Illinois, Northwestern and Indiana.  While Penn State had their own version of Indianas back then, those wins (and they were almost always wins) aren't included in this analysis.  This is a major advantage for Ohio State and Michigan when comparing the three schools' Big Ten performance.

Something else is happening as you move to the right.  Notice the three very clear groups in the 1920 number?  Well that indistinguishable middle-pack breaks up.  Iowa, Wisconsin and (yes) Northwestern make a strong trend upward, while Minnesota, Michigan State and Illinois begin to fade.

And oh man is Indiana bad.

So to get on with it, here's your breakdown of "rank" within the conference, with an unscientific weight on more recent timer periods over more historical ones.  The best and worst number is a school's rank during any of the time periods above.

So with the major caveats I mentioned above about Nebraska and Penn State, do with this what you will.  In 12 months we'll find out if you did done good.

[Photo of ticket via pennstatefootballticketmuseum.com]