If you don't have your health...  After quietly missing some appearances, Joe is apparently back.

"I'm fine," the 83-year-old legend told the Daily News yesterday. "I have some intestinal problems every once in a while. It's one of those things that you have to be careful about how much traveling you do. But I'll be all right."

It's always going to be hard to tell in the offseason what's serious and what's Joe wanting a break.  I'm not of the impression that he's faking sick, but the threshold for a dinner talking about the STEP program is probably lower than this fall's game against Alabama.

Oh, and in case you were wondering:

He said if this was the regular season and his team was getting ready for a road game, that he'd be "ready to go tomorrow."

Still, something to keep an eye on.

But we've got a goal, and since we've pushed back our plans for BSDSTEP, there may be some spare change in your pockets left for our friend Evan Hailes.

Cranky in the Midwest. I'm not going to get into the divisional thing because it's been covered here and multiple times at multiple other blogs, but I will say this: someone is going to be pissed off.

The biggest concern—really the only concern—is what to do with Penn State.  They either stay in the East as part of a division that had the Big Ten's best team in each of the last nine years, or they go to the West, increase their travel, give up their game with Ohio State, and give either Michigan or OSU (mostly OSU for at least the short term) an almost guaranteed birth in the conference championship.

It's messy.  There are situations where other teams can come out in an advantageous position.  Penn State seems to be giving up major concessions no matter where you put them, not to mention the fact that the very favorable 2011 schedule—favorable in location, that is: Alabama, Ohio State, Iowa and Wisconsin are all at home—is almost certainly going to be rearranged in a less advantageous manner.

[I appeal to you to please refrain from posting more divisional splits in the comments.  No matter what you do, we've seen it already, I promise.  At this point I think it's best to wait for the announcement that could come by August and then analyze that reality.]

But there is one upside.  This is available at the SBN store, which I'm not going to bother linking to: 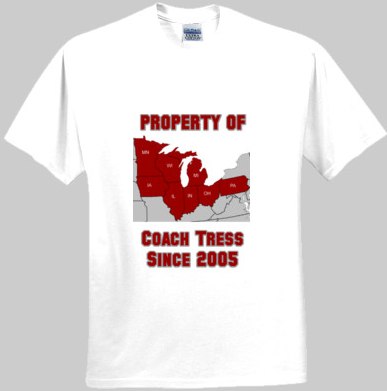 Of all the bad that could potentially come from Big Ten expansion, the one thing we can all finally put to bed: the lie that is "shared conference championships"—which in almost all cases aren't shared at all—and the fake stats they spawn.  The candlelight vigil to honor the death of this instrument will be held in Columbus and broadcast next summer on the now-expanded BTN.

In case you were wondering.

It's really not too bad, actually.

Quickly. If you're into aftermath, Team Speed Kills has a good review of stuff Chip Brown got wrong, even though he's being touted by BoN as "the definitive account."  As a Texas fan, I'm sure that's fun to believe.  CGB has a skeptical review of Chip Brown's "definitive" history—and really it doesn't take that much skepticism to believe he was getting scoops but also being fed mountains of UT PR...which he apparently still enjoys peddling.

In scores of other games. Joe and Jay on Father's Day...Nebraska is formally a member of the CIC.