Share All sharing options for: We Are Penn State 2010 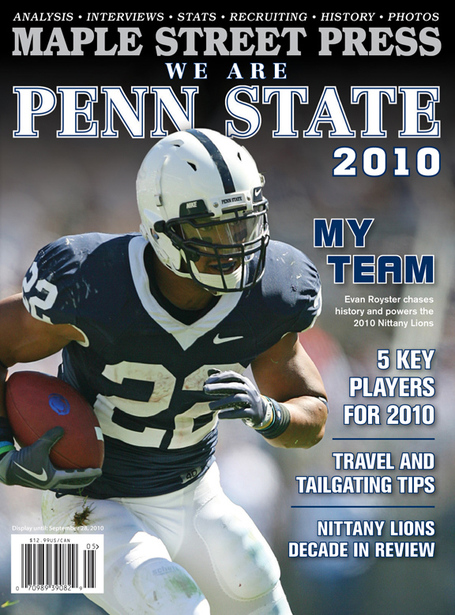 Many of you probably noticed I kind of dropped off the BSD radar during the months of March and April. That's because I was working with the fine folks at Maple Street Press on the second edition of We Are Penn State. Now the work is done and I'm pleased to announce that We Are Penn State 2010 is set to hit shelves in mid July.

That is a ton of information, folks. I, along with everyone else who contributed to this publication gave up a lot of weekends and personal time to put this together, but I'm thrilled with the way things turned out this year. Not only do you learn everything you need to know for the 2010 season, but sections like the Coach's Corner and Penn State History will make you want to keep this magazine so you can pull it out and read it ten years from now. If you are balking at the $12.99 cover price, keep in mind this is 128 pages of Penn State coverage with no advertisements. You are not going to get another Penn State preseason football magazine like this anywhere else.

We Are Penn State 2010 is due to hit bookshelves in mid July. You should be able to find it in Pennsylvania at your local bookstore, grocery store, drug store, Target, Walmart, or anywhere magazines are sold. If you live outside of Pennsylvania, you can go to the Maple Street Press website and order your copy here to have it shipped right to your house.

I'd like to thank everyone at Maple Street Press and all the writers that contributed to helping me put together this great publication. And thanks to RUTS, Kevin, Junny, and For The Glory 1855 for helping keep BSD operational while I was working this. I could not have put this together without the help and support of my friends and family. You guys rock!