In a change of pace from last year, I've decided to increase my summer workouts to keep up with my Icers writing abilities. My workouts also include a lot of beer drinking, but hey, when in Rome Wisconsin, right? Although the summer months are usually fairly quiet in terms of ice hockey news, there has been a slight flurry of news and information over the past few weeks to warrant at least one update between the end-of-season wrap-up done back in April and the pre-season outlook in September. 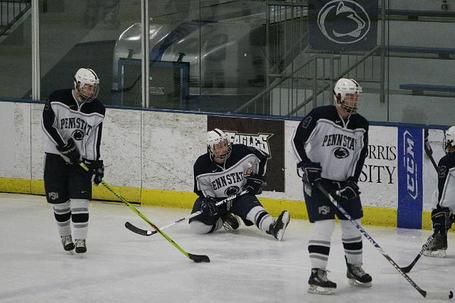 It's all about the stretching...

I promise this isn't about Big Ten Expansion: In my last fanpost, I went through the released 2010-11 schedule for the Icers. While everything had been set, there was an open weekend between the ESCHL playoffs and the ACHA National Tournament. Well, that weekend has been filled with Rutgers for a two-game set played at the Greenberg Ice Pavilion. It will be a nice way to end the regular season with a couple of less-challenging games to rest the injured, while keeping the players somewhat used to full-speed action. Rutgers finished last season as the NECHL regular season champions, earning a spot in the ACHA National Tournament as the #16 seed. They lost both games at the tournament (first to #1 Lindenwood, then to #15 SUNY-Canton in the consolation game) to finish 16th at the tournament.

The World University Games - Coaches: The World University Games are back again, and for the 6th straight time, USA Hockey is using the ACHA for its talent pool of players to send. The games, being held from January 27th to February 6th, 2011 in Erzurum, Turkey, bring together collegiate athletes around the world to participate in basically the Olympics for college athletes. The 2009 WUG in Harbin, China saw the USA team finish with wins over Korea and Slovakia, losses to Russia and Japan, and a final win over China to clinch a 7th-place finish. The team was very close to making it into the semi-finals, but a late breakdown in their loss to Japan relegated them to the 7th-place game.

While try-outs for the team will not be held until August 6th-8th, the coaches for the teams have been announced. For the men's team, Dave Debol, the head coach at Michigan-Dearborn, has been named the head coach. He was the assistant coach for the past two World University Games, and the head coach at Michigan-Dearborn for the past 6 years. He played for the University of Michigan in the 70's, so he's no slouch when it comes to collegiate hockey. Joining him is Icers' head coach, Scott Balboni. Balboni was an assistant coach with Dave Debol at the last WUG, so this will be Balboni's second stint as an assistant coach. Obviously, we've seen the success that Balboni has been able to find in his first four years as head coach, with a record of 127-22-9 over those 4 years.

This will also mark the first time that the USA will be sending a women's team to the World University Games. And to be at the helm of such a momentous occasion, the powers to be have tabbed the Lady Icers' Mo Stroemel to be the head coach of the women's team. Mo has been entrenched in Penn State hockey, with stints as the Icers' assistant coach and the D2 Icers' head coach prior to becoming the head coach of the Lady Icers. (All the while, he's been putting out records and occasionally playing with the Phyrst Family/Family Brew.) And he has done a great job in turning around the Lady Icers' program in his first 3 years as head coach, so it's nice to see him getting recognized in this way. Joining him will be Vince O'Mara - the head coach of the powerhouse Lindenwood Lady Lions.

The World University Games - Players: Since they are still in the process of getting submissions for players who want to try out, there is absolutely no idea at this point who will make the team. But I'm a man of speculation, so I'll put forth a few Icers' names that might make the final cut. You know, assuming they actually decide to try-out - since it does happen later in the ACHA season, sometimes players (and their coaches) hesitate to go. Still, there are some top Icers that could be making the trip to Turkey.

The easiest place to start is with Tim O'Brien and Chris Cerutti. Both finished the season on an insane scoring pace, and Timmy has been one of the most consistent offensive weapons over the past 3 seasons. Marek Polidor and Nick Seravalli are in the next tier, both having somewhat break-out second seasons with the Icers. The third tier includes Dominic Morrone and Eric Steinour. Both had great freshman campaigns that might have been better if the injury bug hadn't reared its ugly head. Still, it's not crazy to think that a solid set of try-outs by either one of those two could give them a shot at making the final WUG roster.

On defense, the list is a little thin, as the top two defensemen both graduated this year. The first option is The Other O'Brien (Rich), who in his freshman year finished 10th on the team in points (2-19-21) and 2nd in plus/minus (+33, only behind Steve Thurston's +47). That combination of offensive and defensive ability is always nice. The other option might be Dan Petrick. His stat line of 0 goals and 8 assists last year might not be impressive, but his sound defensive skills might be specialized enough to find him a roster spot. As for goalies, Teddy Hume tops the list and is likely one of the top candidates to make the roster. 51 career wins (only 14 away from tying the Penn State career record), 6 career shutouts, and a 0.908 career GAA are just some of the numbers that show his abilities

In Other ACHA News: The league is heading into it's 20th season. They have a new logo: 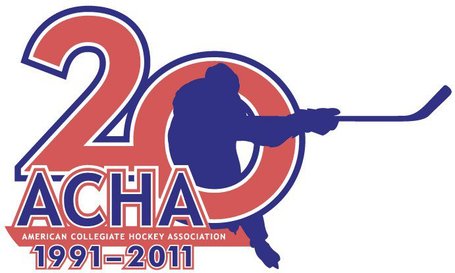 But perhaps more interesting than that is the Google Maps the league has put together to show the growth of the ACHA. Here's the landscape from their inaugural season in 1991. And here's the landscape today. For a non-varsity sport, they've done pretty darn well for themselves.