It was a crisp Saturday this past fall when I, your humble blogger, awakened to the sunlight peaking through the shades of my suburban Pittsburgh home.  I rolled over, grabbed my Y2K style flip phone, and immediately sent out my customary "Happy Gameday" text to the customary people, receiving the customary, mildly annoyed "Thanks" in return.

Only for me, this game day was different from the type I was used to.

I spent my childhood shipping up Route 22 most Saturdays in the fall to a place called Happy Valley.  Though neither of my parents attended Penn State, I got into Nittany Lion football the way most do as kids, through family and friends. So taken was I by the atmosphere of the place from the time I was a little boy that by my teenage years, it was pretty much a given that I'd attend Penn State for college.

And yet, rather than waking up in my messy dorm room in East Halls on the morning of October 10, 2009 to enjoy Penn State's beat down of Eastern Illinois at Beaver Stadium, I was at home, getting ready to head into Oakland, then eventually Pittsburgh's North Side Shore to watch the Pitt Panthers play Connecticut at Heinz Field.

You won't find a lot of people that would make that trade, but anyone familiar with my stance on games against I-AA opponents can probably understand the move.  Regardless though, it wasn't the "traditional"  kind of thing you'd expect a Penn State student to do, given my school's history with Pitt.

After a quick shower, I found myself in the first conundrum of the day: what to wear.  I'd fully intended to bust out as much blue and white as possible, but that was quickly shot down by my best friend, a lovely Pitt nursing student who'd been kind enough to get me a $5 ticket to sit in her student section.  So I behaved.  Not willing to sell out completely though, I grabbed a Nittany Nation shirt from the drawer and pulled an Indiana hoodie over top of it before busting out the door.

Next thing I knew, I was standing on a street corner in Oakland, waiting patiently as the other best friend, a Duquesne music education major, searched feverishly for something "Pitt" to wear to the game.  Amongst the blue and gold threads she was pouring through were the proverbial "Friends don't let friends go to Happy Valley" and "State Penn" t-shirts which apparently sell like hot cakes.  With a smug chuckle, I left following my friends to the school buses that would shuttle us to the Ketchup Bottle.

When kickoff arrived, I got a crash course in Pitt student section etiquette.  You sit during timeouts.  When Pitt gets a first down, you do a cheer.  And apparently when Pitt is losing, you sit quietly in your seat.

With Pitt down two scores late in the third quarter, there I stood in a sea of apathy, trying desperately all the while sarcastically to rally the Pitt students to cheer for their damn football team like the often maligned in these parts Penn State students.  But it was to no avail. It wasn't until "Sweet Caroline" blared from the public address speakers at the end of the quarter that the students came alive.

Tempted as I was to make a sarcastic comment, I kept quiet, and simply laughed at the irony of it all.

Pitt students, to this day, lament the dormant state of the Pitt-Penn State football series.  They lament the fact that their school's traditional rival is no longer on their schedule.  Ironically, though, they don't lament the loss of far greater traditions, legitimate icons of their school's history.  How many of those students chiding Penn State that day actually remember games in this place? 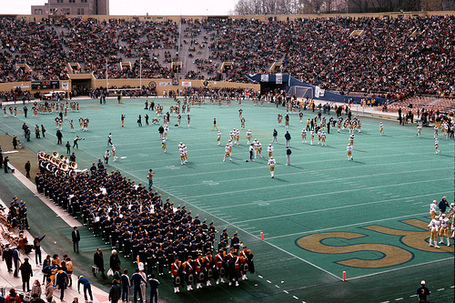 I'm not thinking many, probably because the space where Pitt Stadium once stood is now home to Pitt's multi-million dollar basketball venue, the Petersen Events Center. The new building has brought about unprecedented success for Pitt basketball, something the school's students today treasure.  While I'm sure there are a lot of Pitt alumni out there that miss Pitt Stadium, the average Pitt student today doesn't, but, and this is where you'll find me in disagreement with many who argue the shortfalls of conference expansion and how it will affect "traditions," there's nothing wrong with that.

Where Pitt-Penn State and Pitt Stadium are symbols of Pitt's past, Pitt-West Virginia, big time basketball games at "The Pete" and "Sweet Caroline" are Pitt's traditions today.

Who's to tell Pitt students they can't enjoy that?

A little closer to home, let's look at our own Dear Old State.  Many of the readers on this site are advanced in age enough to remember the days of Penn State's eastern football independence.  The big matchups of those times came against the likes of Maryland, Syracuse, West Virginia, and Pitt. Students threw marshmallows in the student section in the shadow of Mt. Nittany, before the upper deck in the south endzone blocked if from view.

Those days are gone.

Today, we have Ohio State, Michigan, Iowa and the Big Ten Conference.  We have Paternoville... 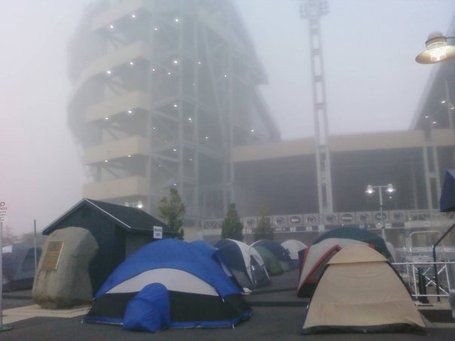 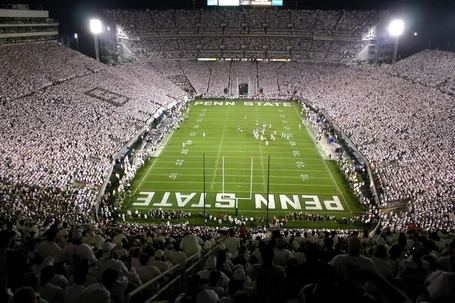 This is the Big Ten era at Penn State, and I'd argue very few Penn State fans like me, who have grown up with the ups and downs of it in the last 20 years, would want it any other way.

In the past, we've talked about games at Rec Hall here at BSD.  As a student of the university, hearing stories about games in that old barn are great.  I love them.  I love the posts we do about Penn State history, too. All of those things are part of what the university I love so dearly IS, not just where it's been.

That said, I'm not bothered by not living through those times, and not getting to experience those moments.  I'd rather enjoy living what we are now.

That's why as the rapidly approaching era of super conferences dawns, threatening to change the things I grew up with as a Penn Stater a little, if not a lot, I don't worry about it.  And I certainly don't fight it like fans at some schools and folks like Dan Wetzel.

All it will do is change traditions and create new ones, things the next generation of college sports fans will grow up loving and celebrating.

By the time Penn State takes on Alabama on September 11, the Lions will have faced three of their historic rivals in the last four years: Alabama, Syracuse, and Notre Dame.  Those traditional rivalries aren't dead, they've merely changed a little.  Some day, Pitt and Penn State will renew their rivalry, too.  Will it be the annual autumn event it once was?  No.  But it will still harbor the same local tensions and hostilities it did in years past, because Pitt and Penn State are still two schools separated by an endlessly reconstructed, 130 mile stretch of highway.

So to all those fighting conference expansion on the grounds that it's going to ruin traditions, I say, just stop please.  I've lived the transition from independence to a conference.  I've grown up loving the things a conference offers, all the while taking pride in Penn State's independent past.  The transition can be made enjoyably so long as you embrace it.

The era of superconferences promises to usher in a period of unfathomable wealth for college athletics.  It promises to bring schools and fan bases from across the country closer than they've ever been before.  It could bring about the college football playoff system fans have begged for since the dawn of time.

I can't sit here and say the process is pure or noble.  As Wetzel points out, it's certainly fraught with greed and power grabs that are regrettable to say the least.  That said, 15 years from now, will the college sports fans of tomorrow really care about that? Or will they care about the good things they will inevitably enjoy in their time?

Tradition is great, but it should never get in the way of progress.  For as long as I live, I'll celebrate the great moments in Penn State's history, from it's formative years, to it's dominance as an Eastern football independent, to it's roller coaster through the Big Ten years.

But right now, I'm excited to face the challenges this burgeoning era holds, and you should be, too.

I'm looking at you, Notre Dame.