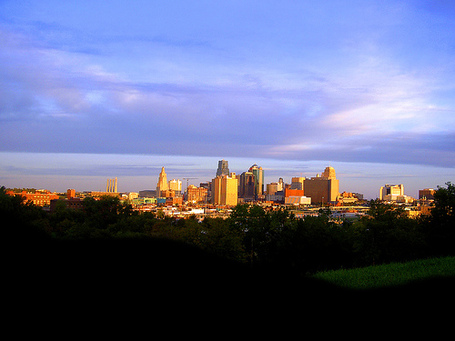 As one of the 903,540 households in the KC region (and paying an extra $4 a month to get BTN on Time Warner cable) I feel the need to provide a counterpoint to Kevin’s great post about how New York City is a far better market than Kansas City.  On the surface it looks obvious that NYC should be grabbed, but if it was so clear the Big Ten would have made a strong move by now.  I'm trying to explain why the Big Ten is seriously considering Missouri as a highly viable option for the Big Ten, and why the TV market prospects in the Show-Me State may be better than you think.

Like Pennsylvania, it has two large metropolitan areas at the edges of the state.  While the area in between these cities (Pitt/Philly, KC/St. Lou) is often perceived from a distance as a wasteland of discarded soy bean hulls and hill people--there are in fact a number of fairly sizeable towns which, when aggregated, adds up to quite a lot of people.

It’s only fair when assessing these TV market discussion to note that Kansas City is not the only TV market that would be added with the addition of the University of Missouri.  It's correspondingly fair to consider that Kansas City--while a college sports hotbed--is highly divided between Kansas, Missouri, and Kansas State fans, with some Nebraska fans tossed in the mix.

With all this in mind, these are my rough assessments of TV market share percentages of Missouri TV markets and the households that have an earnest interest in the University of Missouri and its athletic program:

Combining these portions of households totals 2.1 million people, which if it were a single TV market would put it in the Top 10 in the country.  That’s not peanuts.

Admittedly it is a fraction of the New York City market.  Still, consider that I made an attempt to rationally judge a percentage of the households in the state that would at least have a fleeting interest in Missouri athletics.

Try to judge the enigmatic New York City market in the same way.

The counter to this argument is, "it doesn’t matter, cable companies just look at whole numbers and New York City blows Missouri out of the water."  That’s true, but eventually you will need ratings, and where will ratings be sustainable? The numbers of households that would watch BTN could be much closer than you think.

Secondly, there’s the matter of the school's football program: Rock M Nation has been ranking the Mizzou football teams from 1920 to the present day.  Two things come to mind: this team has been strongly supported for a long time, and jeebus they've had to sit through a lot of mediocre 6 and 7 win seasons.  If the Big Ten was looking to invest in stocks, Missouri would be an underperforming stock with good recent indications that it will trend upward.  The payoff could be big.