The Big Ten championship game will be played in 2011.  It's a matter of where and, to a much lesser extent, what day.  Say the game is played December 4th, the date of at least one CCG this year.  Average temperatures in...

So yeah, that's cold.  It's also the same temperature people who live in those areas have made peace with for years, decades, lifetimes and generations. It's the country we come from (called the Midwest).

Playing football in the fall and outdoors is not some preconceived statement about identity.  It's what we do.  And we've been doing it a lot longer than ESPN has been showing shirtless wonders to wide-eyed people in the rest of the country who can't figure out why.

This isn't about how tough we are—I haven't read a single northern blogger describe it as such, yet find it amusing that we've insulted manhoods in the south anyway—it's about us embracing where we live and thinking that the Ice Bowl is a heroic folk story.

Some of the best winter breaks of my life included routine tackle football games in, you guessed it, obscene amounts of snow.  And the stages get bigger—I havn't googled them all but I'm not aware of a single high school football championship played in-doors.

And high school football is no small deal in the midwest.  Even with so many people very concerned about a pure and fair outcome, in 2010 it finishes—outdoors, of course—on December 4th in Ohio.  According to PennLive, Pennsylvania's regular season doesn't even end until November 25th.

And guess what, no one is proposing we move it inside.

Bringing this back to earth: the people who will make this decision will use the following criteria:

1.     Having lots of seats and getting them all filled.

2.     To a lesser extent, keeping demand above supply so they can keep ticket prices up.

3.     Getting the highest TV rating possible so that they can demand rising rates from ESPN for coverage.

Producing a champion that is best positioned to beat someone in beautiful southern California is not part of the criteria.  Neither is making sure SEC bloggers approve.

If viewers in the Midwest think an outdoor game is more interesting because of the cultural significance, well that's icing on the cake.

Minnesota was up for a new stadium once people realized the Metrodome had begun it's structural decline.  Did they worry about being able to build a team that could compete in good weather?  Recruit Florida players?  Or fans—mostly desk jockeys and students—who would just hate to sit outside for four hours?

No, they realized the vast majority of their fans loved the idea of outdoor football and reacted accordingly: 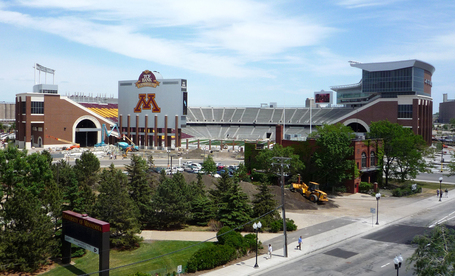 via creative commons via wikimedia.org

I have no idea if they will actually run with any of these outdoor CCG proposals.  I suspect they wont—the safe and boring bet is Indianapolis and that's where the smart money ought to be.

But either way, important football games played outdoors in northern-December are not some kind of outrageous suggestion, they happen every year and are as much a part of Midwestern culture as the ice scraper.