Share All sharing options for: Nitt Picks Is Rollin' With LeBron James

Well it's decision day for LeBron James, but the Akron Hammer isn't the only one making headlines from the Rubber Capital of the World.

Nittany Lion guard and NBA hopeful Talor Battle has been impressive at the LeBron James Skills Academy in Akron, and is drawing some nice reviews. First Ryan Jones of SLAM.

I am obliged to mention Penn State senior-to-be Talor Battle. He’s the smallest of the 20 college campers here, and comes from the least accomplished program. Having spent the past three years seeing him in person, I know he can score. Good to see him here, surrounded by talent and focusing on running a team and distributing.

Since Penn State's season wrapped up in March, Battle has been putting himself seemingly in front of as many scouts and NBA types as possible to keep whatever pro prospects he has alive and well. Good for him.  The work he's getting in these camps and the advice he's surely gleaning from those who know what it's going to take to get him into the League can only help Penn State in 2011.

That said, it could be even better that Battle is out there working out with a lot of high school campers and putting a face on a Penn State product that at this point is a back shelf supermarket knock off with high school recruits.  Battle's rise against seemingly all odds could certainly draw some eyes in what is going to be a big recruiting year for the Nittany Lions, who by year's end will need to have replaced Battle, David Jackson, Jeff Brooks and Andrew Jones.

Fran Fraschilla of ESPN is in Akron as well... 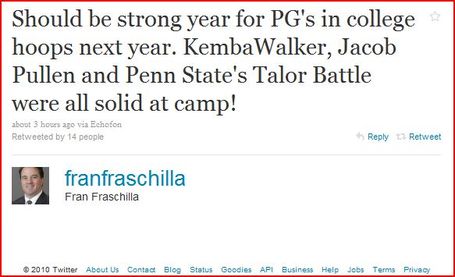 Even a few months ago, it'd have been wishful thinking for Battle to be in a conversation with guys like Kemba Walker and Jake Pullen.  Here's hoping Battle's hard work this summer is quietly rubbing off on his teammates.  If the best player on the team is working this hard, there's really no excuse for the anyone else on this team to slack off after last season's debacle of a campaign.

The Daily Collegian caught up with former Nittany Lion Mike McCloskey  recently to talk about the infamous catch call (above) against Nebraska in 1982.

Nittany Lions' decisive touchdown, he still wishes he knew whether or not he was inbounds.

"The silliest part of it all is that it was not my call," McCloskey said. "I still don't know to this day whether or not I was in or out of bounds because it was just a bang-bang play and we were running to

Though McCloskey said his catch "probably wasn't a big deal" at the time, once the Lions scored he said he understood the magnitude of the play. With instant replay not an option back in 1982, he said in some ways the play has been good for him. It made people remember the game and therefore they remember his contribution.

Penn State-Nebraska. Once everyone gets past the warm and fuzzy feeling of having the Huskers in the conference and they start beating people, it's things like this that are going to get more play.

Today is the last day before Lift For Life so get your donations in ASAP.

As of this posting, BSD sponsored Evan Hailes has raised $1,005. He trails a few guys including Matt McGloin and Brent Brackett, but the top-five is certainly attainable. (Full Roster)

If you haven't donated already, please consider making a donation to Hailes and help him reach the BSD set goal of $2,500.

Penn State fans have been looking forward to the 2011 home schedule for a while now, but it might all be going down the tubes in the next few days as the Daily Collegian points out.  Regardless of what division Penn State ends up in, assuming the league is broken along geographic lines, the conference slate will have to be altered.

Putting the competitive fairness argument aside, let's assume the conference will be divided based on one of the two above formats. Penn State must play all five division teams.

In the East-West scheme, Indiana and Michigan are division foes, but they aren't on the schedule the next two seasons, meaning that barring no other scheduling problems, at least two games would need to be switched in 2011 and 2012 according to East-West alignment.

If the Big Ten is divided South-North, Nebraska and Indiana matchups would have to replace two conference scheduled games.

At the least, scheduling looks like it will be a tedious process, and in any scenario, Penn State will have to readjust its schedule.

The Collegian was also told by athletic director Tim Curley that scheduling won't come up until after Big Ten meetings later in the summer.

It'd be a shame to see that great 2011 home slate broken up too much, though it's well within the realm of possibility that at least two of those contests with Ohio State, Iowa and Wisconsin will stay intact, or that Nebraska will replace one of them.