For weeks, nay months, I've just been operating under this assumption that Kevin Newsome is going to be the starting quarterback on opening day. Sure, Matt McGloin talks a good game and you have to respect his effort, but Newsome is the man and we all know it. Or, at least I thought I did. But then Big Ten analyst Dave Revsine had to drop this bomb as the Big Ten Network was in Happy Valley today to observe practice in filming their PSU preview show to air next week. 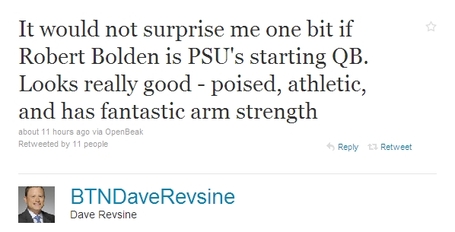 For all the crap we hear from the Michigan blogs about the OMG Barwis EEEEEEEEE!!!11!1! mancrush, I must say the corners of my mouth perked up when I read that Rich Rodriguez is not pleased with the conditioning of his team as they start preseason camp.

"There's quite a few guys in very good shape, there's a handful of guys in OK shape and a small handful of guys that aren't ready to play Division I and so, our goal and expectation is to get everybody up to the top level and we've got a few weeks to do that," Rodriguez said Monday after practice. "If they don't do that, they won't have the opportunity to wear the winged helmet come September 4."

Back when they were using the HIT method, they were beating Penn State. Just sayin'.

A reader on the Michigan State blog The Only Colors wants out of the Land Grant Rivalry.

I actually wouldn't mind picking Wisconsin if it won't be Penn State. We already hate them in basketball and the trophy could be a globe filled with Lake Michigan water. The Carferry Cup? (The S.S. Badger's dry docked sister is the S.S. Spartan)  However, I don't see the divisions you're going to construct that makes that happen without making everyone else mad. You could use cross-division protected rivalries, though, much as I dislike those.

So here's the solution basically offered up. Minnesota plays Wisconsin at the end of the year. Iowa gets Nebraska in the finale. MSU would play Northwestern. And this would leave Penn State to play...are you ready for this?...Indiana. Or maybe Illinois.

Yay. And people wonder why Penn State feels like they always get the shaft from their Big Ten brothers.