Penn State Hockey: "Maybe We Can Find A Pennsylvania Crosby"

Share All sharing options for: Penn State Hockey: "Maybe We Can Find A Pennsylvania Crosby" 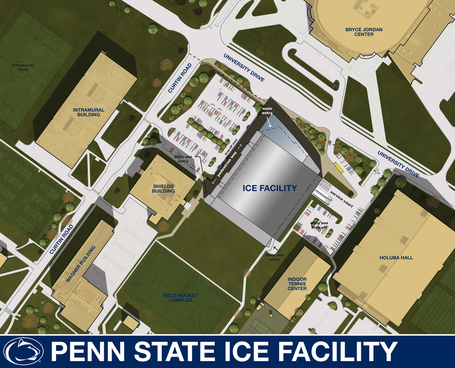 After days, weeks and years of rumor and speculation, Penn State Intercollegiate Athletics announced Friday that the school will launch men's and women's varsity ice hockey programs beginning in 2012-2013 upon an $88 million donation from Penn State alumnus and energy industry mogul Terry Pegula toward a state-of-the-art on-campus ice facility.

Penn State will begin play at the NCAA Division I level as an independent in 2012-2013 at the Greenberg Ice Pavilion, and play there through 2013-2014. The Nittany Lions are scheduled to move into their new facility in 2014-2015, and will likely join a conference at that time.

Athletic director Tim Curley said Penn State will work with it's Big Ten collegues as well as the college hockey community to find a league arrangement that would be best for the sport, and remained open to the possibility of forming a Big Ten hockey conference with the league's five other hockey members, Minnesota, Michigan, Michigan State, Ohio State and Wisconsin.

The yet-to-be-named ice facility will be constructed across University Drive from the Bryce Jordan Center in the area of Shields Building and the Indoor Tennis Center. Curley said target capacity for the venue is between 5,000-6,000 but the university has yet to hire an architect, so specifics are not known at this time. The facility will boast two ice sheets, and will house the hockey programs in addition to figure skating, youth programs, premiere ice shows and NHL and AHL exhibition games. 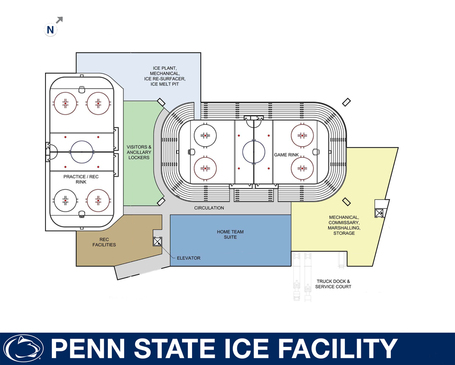 Pegula's donation is the largest in the history of the university.  In his comments, Pegula said the project has been in the works since 2006, coming to fruition Friday as the papers were signed to make the launch official.

The men's hockey program will have 18 scholarships while the women's program has 20. No coaching decisions have been made for either program, and the university will likely move on that once an architect for the new building has been named.

Pegula spent Thursday in Pittsburgh at a charity golf tournament and met with members of the Pittsburgh Penguins organization, including owner Mario Lemieux and team captain Sidney Crosby, who he said were excited to hear the news."[Crosby] said 'Mr. Pegula, this is a great thing you're doing for hockey,' and I thought that was pretty cool," Pegula said. "So I'm going to guess that some day in these hills of Pennsylvania, maybe we find a Pennsylvania Crosby, and maybe he learns to skate at our facility and plays his youth hockey here and maybe he plays Division I hockey at Penn State."

The news of Penn State hockey is rippling through the hockey world, as those at the highest level of the sport are weighing in.