Varsity Hockey at Penn State: Is This Real Life?

Share All sharing options for: Varsity Hockey at Penn State: Is This Real Life?

The announcement last Friday may have felt like a dream. For many people closely connected to the program, it has been a dream in the making. In an interview with Steve Penstone, Joe Battista described the feelings he and his wife had on Friday as comparable to those they felt on their wedding day. Those feelings of worry and uncertainty, followed by joy and euphoria (and likely some celebratory drinking) were felt by many as the announcement made these dreams for varsity hockey a reality. 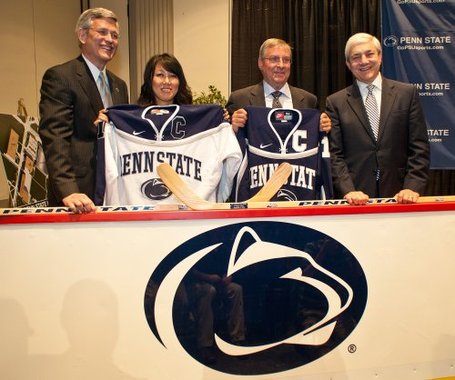 Also, that wasn't the end of the news for the name, face, and (if you've ever heard him speak) voice most connected to Icers, as JoeBa was named the Associate Athletic Director for Ice Arena Operations and the Director of the Ice Arena and Hockey Campaign on Monday. (Also amazing is that GoPSUsports.com lists hockey under their listing of teams.) Ever since stepping down from his head coaching duties, JoeBa has bounced around a bit within the University. This move back to running an ice arena was only a natural progression.

These announcements have created quite a stir amongst the college hockey world, as many wonder how the addition of a major program like Penn State will shape and reshape the college hockey landscape. Lost in all of this conversation has been how this will affect the current ice hockey teams at Penn State. After the jump, I'll go through some of the bigger details and what we might expect to happen.

So, What Happened? That's something I've been asking myself since Friday. Still, the recent announcements surrounding the ice hockey program have been massive to say the least. Since my fellow writers have done a solid job of covering and recapping these stories, I'll just give some of the important points:

What Does This All Mean?  Lets take on the roster and personnel first. Sophomores and freshmen will have the opportunity to try-out and play at the varsity level before they graduate. Based on last year's work, sophomore forwards Eric Steinour and Dominic Morrone have a great chance as seniors to make that inaugural team. Rich O'Brien also had a strong freshman campaign on defense, so he might be able to make the varsity team with the other two. As well, there will be the chance for other players to step up (especially the unknown freshmen) over the next two years to prove their worth.

Coaching has already been an interesting topic of discussion. There have been some well-established names from outside of the program that have mentioned interest in the position. And of course, current Icers coach Scott Balboni would be just as glad to make the transition with the rest of the team. Still, hiring a quality and experienced coach with name recognition would help fill the seats in the first few seasons. Add in some success, and hopefully there won't be much of a drop off in success from the ACHA to the NCAA. (Hey, a guy can dream some more, can't he?)

One of the interesting things that I will keep an ear out for is how will this announcement alter recruiting for the next year or two. I have no idea if the Varsity-level recruits would be willing to play at the club level for a year, or perhaps play an extra year of Junior Hockey, in order to play for Penn State. On the other side, I wonder if the top-tier club players will look elsewhere if they are afraid of being kicked to the curb, so to speak, when the team makes the jump in 2012. If the powers-to-be play it smart, they will keep the ACHA DI team and scrap the D2 team, if the numbers are thin. This way, the club players will feel still have a solid fall-back option if they do not make the varsity squad.

A Shout Out To The Ladies. Swept up in all this talk has been the fact that the Lady Icers are also making the jump to varsity hockey. The women's program, which has nearly gone from "rags to riches" over the past three years, will be looking to carry their new found momentum and success to the varsity level. In contrast to the men, the Lady Icers may see more of their current sophomores and freshmen make the initial varsity squad. Along with the players, the Lady Icers' head coach, Mo Stroemel, might find himself a spot after the bump to the NCAA. Stroemmel has been around the Penn State Ice Hockey program for 15+ years now, and he has been the key to moving the Lady Icers from a team barely rolling three lines, to a team that rolls four lines, has healthy scratches, and is competing with the established ACHA programs. And he's done that in just a few short years. In my book, he is the perfect fit for the new program. 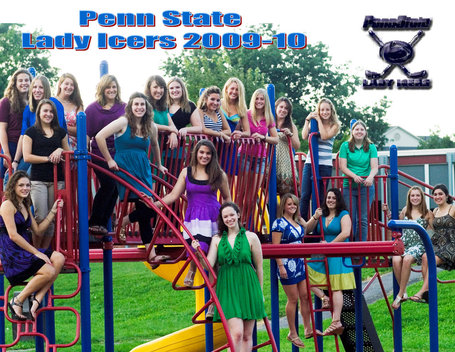 For Future Reference... When it comes to college hockey, the landscape is quite different from the other major collegiate sports. Yes, there are some foes that we know well already - the other five Big Ten schools (Michigan, Michigan State, Minnesota, Ohio State, and Wisconsin) have talented teams, Notre Dame is putting together a solid program, and Boston College still wreaks havoc in the New England area. But as notable as those schools are, you'll have to get ready for the Mercyhurst's and Bemidji State's that are commonplace in college hockey. Schools like Robert Morris, Mercyhurst, Niagara, and to an extent Alabama-Huntsville will likely be regulars on the schedule.

Bemidji State's logo is so cute!

From there, Penn State is in an interesting position - we can continue to play the midwest teams, including the new powerhouse in Miami of Ohio; or play the northeast, which has a number of talented teams, not to mention providing the "opportunity" to revive some of the old "rivalries" with the Ivies. I'd suggest using the USCHO website to become more acquainted with the college hockey landscape.

In terms of potential conferences, the CCHA still seems like the best fit - largely midwest (excluding Alaska), with four known opponents for any Penn State fan (Michigan, Michigan State, Ohio State, and Notre Dame), and currently sitting at the odd number of 11 teams. A Big Ten conference will be coming, and likely sooner than later. But I doubt it will happen until the other conferences have reliable replacements to make sure that there isn't a deeper collapse within collegiate hockey.

There are a few schools that I am sure will be watching the transition and success of Penn State's jump to the NCAA. While Indiana is hoping to create a varsity program out of basically nothing, Illinois' success in the ACHA is not far behind Penn State's. As well, Lindenwood's hockey teams have been on fire in the ACHA over the past few years, with the men's team winning the past two championships and the women's team winning the last three. It will be interesting to see if these teams, along with a few others (most notably Ohio, Iowa State, and Liberty), will look to make the jump to varsity should Penn State find some early success. The developments over the next few years will be very interesting to watch for both Penn State hockey and college hockey in general.