Share All sharing options for: Icers Recap: A Weekend of New Names

The weekend of new names started early on Friday for the Icers. At the Board of Trustees meeting, it was announced that the new ice rink being built on campus will be named the Pegula Ice Arena - reasonably named for the man who donated the $88 million to have it built. It's yet another step in the reality that is varsity-level hockey at Penn State.

Turning to the ice, there are a few unfamiliar names surrounding the Icers' roster. With Tim O'Brien and Eric Steinour leaving the team for a few weeks for the World University Games, and Taylor Cera and Kevin Miller down with injuries, some of the normal scratches will start seeing more ice time. This includes defensemen Ryan Seibolt and Brian Dolan and forward Mike Broccolo, as well as the return of forward Nick Seravalli - a 20 goal scorer last season, but has only played in 9 games so far this season due to an injury. The players aren't the only new names, as coach Scott Balboni will be traveling with O'Brien and Steinour as an assistant coach for Team USA. This means first-year assistant coach Josh Hand will take over head coaching duties for the next three weeks.

But the Icers aren't the only ones with some new names. The West Chester Golden Rams have a few new players since the Icers last saw them in November. Since that Icers' sweep, WCU has EIGHT new players on the roster for the spring semester. All these changes set the stage for an interesting weekend for the Icers - a weekend that could very well set the tone for the rest of the season. 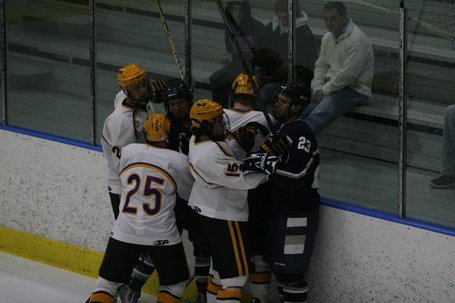 As I've mentioned previously, West Chester is always a tough team to beat at home. With the offense thinned and a lot riding on this game, the Icers needed to set the tone early. Just 1:24 into the game, Mike McDonagh would do just that - scoring his 3rd goal of the season and giving the Icers an early 1-0 lead. The Icers would extend the lead to 2-0 halfway through the period, as Rich O'Brien would fire a shot from the point past the WCU goalie. The Icers would carry that lead into the 2nd period, but only for a short time into the period, as West Chester would score 1:37 into the period. But Chris Pronchik would put home a rebound and return the lead to two. Halfway through the period, McDonagh would get his second and hat-trick goals of the night within a minute, extending the lead to 5-1. George Saad would continue the scoring run for the Icers, adding a powerplay goal with less than two minutes left in the period. The third period was fairly uneventful, with a few chances, a few penalties, and a Kurt Collins goal late in the period to send the Icers home with a 7-1 win. Matt Madrazo played very well in net, further supplanting his place as the starting goaltender for the Icers.

As the teams traveled to Happy Valley for the second game of the weekend, the Icers looked to keep the momentum going. Matt Madrazo was awarded for his solid play with a second straight start. Early in the game, the offense kept the momentum going, controlling the action for much of the first period. Even with a 16-5 shot advantage, the game remained scoreless after the first period. Finally, five minutes into the 2nd period, Paul Daley put one past the WCU goaltender, giving the Icers the 1-0 lead. Halfway through the period, the physical play picked up, along with the scoring. The Rams would get a powerplay goal, only to see Chris Cerutti counter for the Icers less than a minute later. That would remain the score until early in the third period, when Mike Longo would put home a rebound, extending the lead to 3-1. The scoring would continue, as Cerutti would make it 4-1 just a couple minutes later. A late WCU powerplay goal would shrink the lead to 4-2, but that would be it. The Icers would skate away with the 4-2 win and a much-needed sweep of the West Chester Golden Rams.

News and Notes: So remember last week when I said that the Icers might drop in the rankings only to Iowa State? Well, the ACHA coaches prove their idiocy fickleness yet again, and decided to vote Oakland ahead of the Icers (Iowa State moved to #12). The same Oakland team that split a weekend set with D2 Grand Valley State and swept an unranked, 6-win Eastern Michigan team. Because that is apparently more impressive than getting swept by the #3 team on the road, and then sweeping the #17 team on the road. Oh, the ranting on the ACHA is only starting. Either way, the next rankings come out on February 4th.

One of the positives of losing players to the World University Games is that other players - usually 3rd and 4th liners - are given more playing time. Sometimes, they take advantage of it and start rolling into the late stages of the season. This weekend, it was Mike McDonagh who did just that, scoring more goals in Friday night's game (3) than he had all season (2). Broccolo and Seibolt both had good games as well, and hopefully Seravalli will begin to return to his 2009-2010 form.

While the Icers got no real help in the other games this weekend, the sweep of West Chester was necessary to keep pace with everyone else and to build momentum heading into an important weekend against #4 Delaware. Before this past weekend, it was my belief that the Icers would need to win 6 of the next 8 games to ensure that they're ACHA Tournament bound - sweep WCU, split with UD and URI, sweep RMU. I still believe this is feasible (and necessary), but seeing how URI swept UD a couple weekends ago, stealing both games from the Blue Hens this weekend might not be out of the question. The biggest challenge is knowing that Delaware has their full roster, as the Blue Hens sent nobody to the World University Games.

Some Love for the Ladies: After struggling to get a win to start 2011, the Lady Icers welcomed Cal of PA to the Ice Pavilion in hopes of getting the season back on the winning track. Like their male counterparts, the Lady Icers began their stretch of games without some of their players, including both goaltenders Heather Rossi and Katie Vaughan, defender Lindsay Reihl, forward Denise Rohlik, along with head coach Mo Stroemel. Even with these losses, the Lady Icers came out and dominated Cal of PA, rolling to a 5-1 victory. Perhaps most impressive about this win is they did it without leading scorer Carly Szyszko on the offense - she was playing goalie for the first time ever, stopping 6 of the 7 shots she faced. The Lady Icers will look to continue the winning ways as they host Robert Morris (IL) for two games this weekend.