LDSJZGLSZDGJKNDSZG!!!111!!1.  The "Penn State refuses to give up!" angle has been sufficiently and rightfully exhausted here and elsewhere, no need to rehash.  One truly crazy thing about whatever that was in Beaver Stadium Saturday afternoon, is that there's really no improper reaction to it.  Joy, relief, anger, frustration, denial, resentment, trust, appreciation -- they're all in play and all perfectly valid.  In fact, my instant audible reaction to the attempted game-tying field goal was, "Yes! Off the f**king post!".  This was immediately followed my the thought of, "damn it, now I have to emotionally invest myself in this Russian Roulette team again in two weeks."

All Is Well!  And all is well because Matt McGloin helped accomplish what seemed like a total impossibility, given Penn State's sixteen previous fruitless possessions -- yes, I'll include that 10-play, 18-yard field goal drive in that.  He pieced together a last minute touchdown drive after the offense had amassed a grand total of 129 yards in the prior 57 minutes of play.  The numbers remained ghastly.  111 yards rushing on 41 attempts (2.7 ypc).  Nine completions on 28 attempts for 98 yards and one interception (5-for-22 and 71 yards until the final drive).  Six fumbles.  Four sacks allowed.  One victory.

8-1 never smelled so foul and tasted so sweet.

These Paragraphs Sponsored By Vic Vinegar.  The above notwithstanding, if any number of plays or calls had bounced another way, we would be mercilessly dissecting one of the worst losses in recent Penn State memory.  Not to mention, one of the most egregiously squandered defensive efforts in program history.  The Sukay hit on Scheelhaase and the pass interference call on the late pass to Moye could have easily gone against Penn State.  Same goes for the D'Anton Lynn interception.  If those are called the other way, every Penn State message board and blog would be littered with the ever-familiar Big Ten referee conspiracy theories.

The decision to play Rob Bolden in the first place was questionable.  Using him for four consecutive series -- and no, I don't care if the "plan" was to play him the whole second quarter -- was coaching malpractice. 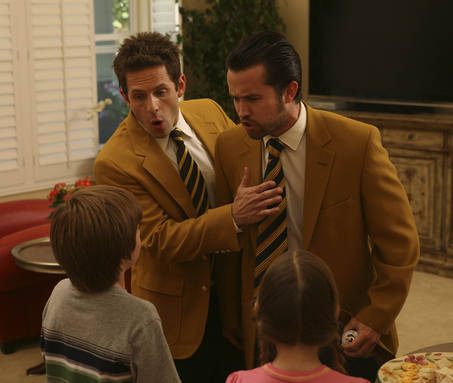 I don't know why this charade continues.  And no, it's not like McGloin was tearing it up prior to Bolden's quarter of action (McGloin was 4-11 for 33 yards), but exactly who are we kidding here?  When high-character Penn State guys like Michael Robinson and A.Q. Shipley are criticizing Bolden on Twitter, it's impossible to not wonder what the coaching staff sees that the rest of the free world does not.

All of this said, stop booing him, you assholes.  Seriously.  Enough.  And don't try to say that you're booing the coaches' decision to play Bolden.  Even if you are, you're really not.  Stop it.

Again, Penn State's game management skills almost cost them dearly.  Driving for the go-ahead touchdown, Penn State gets a 1st and Goal on the Illinois 5 yard line.  Both teams have three timeouts, there is 1:20 remaining in the game, and the clock is stopped following the play.  Sixteen seconds elapse between the end of the prior play and when Penn State inexplicably calls timeout with 26 seconds left on the play clock -- the game clock is still at 1:20.  I remind you, THEY ARE AT THE 5 YARD LINE.  This wouldn't be good timeout management if they were at the 50, nevermind the 5.  Illinois almost certainly must call a timeout in this situation -- let them.

Okay, Penn State calls its timeout and runs a play -- Silas Redd down to the 3.  Illinois surely is going to use one of its three timeouts here (at this point, even if Penn State runs on all subsequent plays and scores on 4th down, Illinois still has one timeout for their final drive).  And OH MY GOD, WHO IS IN CHARGE ON PENN STATE'S SIDELINE?  Another PSU timeout at 1:11.  Redd scores on the next play, now Illinois has three timeouts and 1:08 remaining. This is an eternity in college football.  Just putrid, choking game management, which could have easily cost Penn State the game.  Give my dog a copy of NCAA '12, a PS3 controller, and 20 minutes -- she figures this stuff out easier than the Penn State coaching staff.

In Praise Of.  My dear, the whole defense.  Still and Hill combined for 20 tackles and 4.5 TFL.  Gerald Hodges had 19 tackles.  The entire defense had 10 tackles for loss, by six different players.  They forced nine punts and four turnovers.  The crazy part?  Statistically, Illinois' defense was better: they allowed 77 less yards, held PSU to 3.0 yards per play and 2.7 yards per rush, and denied PSU on 12 of 15 third down conversion attempts. 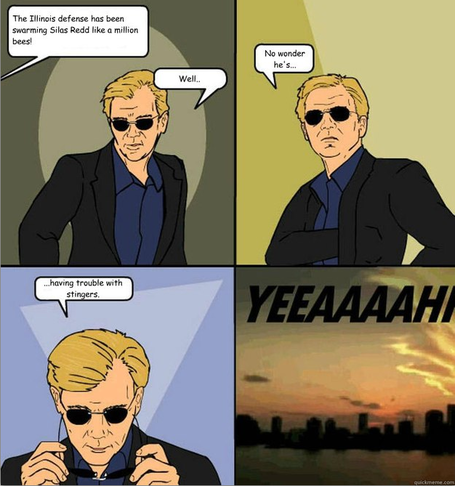 But seriously, maybe one of our learned readers can help me here.  What exactly is the reasoning regarding which PSU running back not named Silas Redd gets carries?  This week, it was Brandon Beachum getting the ball (well, twice).  Stephfon Green and Curtis Dukes didn't grace the box score. 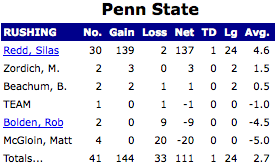 Look, I love Silas Redd too, but he's now wearing down at a rapid pace.

He Is Not Other Guys.  Unleash The Dragon.  Was the bomb to Moye the ultimate McGloin throw?

This time, he completed two passes to Moye, then looked at him in the end zone on fourth-and-six. McGloin said he went through his progressions and Moye, in single coverage, was the only receiver open. A pass-interference penalty on Illinois gave Penn State first-and-goal at the Illinois 15-yard line. Redd scored three plays later, giving Penn State its first lead of the game.

Told after the game that other guys might not attempt that fourth-down throw, McGloin laughed. "I'm not other guys," he said.

And to be clear, it was the right throw.  Moye had a step on Illinois' third-best cornerback, and McGloin threw a perfect pass.  If you're looking for the clearest difference between McGloin and Bolden's huddle presence, Silas Redd is here to help.

"We all faced adversity the whole game, but he was able to keep his poise and still be charismatic and really get the guys in the huddle going," Redd said. "That's one thing I really love about Matt. Through everything, he's still able to keep things on an even keel."

And So It Begins.  The annual speculation about Joe Paterno's future apparently kicked off during the post-game plaque presentation, as Tim Curley responded to a question with, "We're still focused on finishing out the season.  We'll talk about that stuff at the end of the season."  Penn State has two weeks before its final home game of the 2011 campaign.  Despite years of people (including the man himself) insisting that Joe Paterno doesn't want any sort of grand farewell, both Paterno and Penn State seem to quite enjoy these milestone ceremonies.  If there was a NAIA coach out there with 411 victories (there isn't), Penn State would be finding a way to hype The Quest For 412.

Regardless, the whispers have already started regarding JoePa's possible last home game and what might transpire before or shortly after the Nebraska game.  Same as every other year, but if anything substantial should bubble up, we'll be on it.

Next.  Bolden goes 2-for-13 with 3 interceptions against Bye.  Jay Paterno vows to split practice reps equally leading into the Nebraska game.  Penn State wins by 1.