Share All sharing options for: Inside Penn State's Offensive Inconsistency

Q: He seems to have an innate sense for the ball . . . do you give him a little bit more rope to freelance just because his instincts are that good?

A: I don't know that . . . I think what we do is that we put him in a position where the plays come to him and then it's time for him to make his plays.

It's often said that it's not the X's and the O's, it's the Jimmy's and the Joe's.  That is, basically any system can be run effectively assuming a program recruits the right players to make that happen.

On Wednesday, Scott Van Pelt asked Les Miles, the head coach of the LSU Tigers, about sophomore cornerback Tyrann Mathieu.  Mathieu is a sensation - 18 games into his tenure, he's already set the Bayou Bengal record for forced fumbles.[1]  Van Pelt essentially asked Miles what made Mathieu so special.  Miles was deferential to his player's ability, but the message is clear.  Mathieu is a terrific athlete and a fantastic player, but none of that matters if LSU's defensive scheme doesn't put Mathieu in position to take advantage of his skill and aggressiveness.

Penn State's base Cover 3 defense has been the subject of great scrutiny and often the target of unwarranted criticism.  This is not a surprise in many respects.  It's frustrating to watch a 3rd-and-4 converted on a short pass because our talented cornerbacks are playing ten yards off the receiver.  Still, most of this criticism is flawed.  The goal of a defense is to prevent the opposition from scoring points.  Historically, Tom Bradley's defense has been quite exceptional:

These rankings should come as no surprise to anyone who has watched Penn State's defense since 2004.  The Nittany Lions have recruited exceptional players on the defensive side of the ball and have produced multiple all-conference and All-America performers.  The scheme traditionally allows the linebackers to play downhill in order to attack the run (and force the running back to move laterally, where the linebacker's athleticism takes over) while using the front four's combination of size and speed to put nearly unparalleled pressure on the opposing quarterback.  If the quarterback somehow manages to get the ball out of his hands, his rushed and imperfect throw is either broken up or stopped for a short gain by our fundamentally sound tacklers in the secondary.

It is basically impossible to argue with the defensive performance.  For all of the complaining that Nittany Lion fans do, this defense just works.[3]

The offense, however, is a different story.

There's no question that Penn State could be more successful recruiting big play athletes on the offensive side of the ball.  Nevertheless, this year's offense is instructive.  In our starting lineup, the Nittany Lions feature one of the best wide receivers in school history, several highly recruited players starting opposite of him, an electrifying playmaker at tailback, two fullbacks who can block, receive, and carry the ball, several offensive lineman who were highly recruited, one quarterback who was a four-star recruit with impeccable mechanics, and another who is less technically proficient but still manages to throw a pretty ball.  The Jimmy's and the Joe's exist.  Why is this offense 93rd in the nation?  What made the 2005 and 2008 offenses so successful? 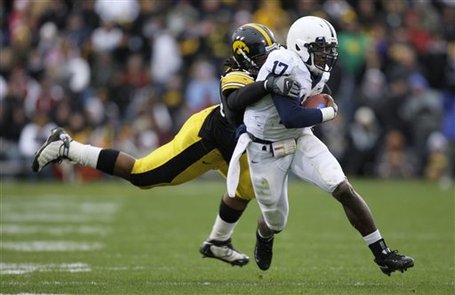 Penn State is not commonly referred to as an offensive innovator.  Penn State, as we've documented here, runs a minimal amount of plays.  They often play the field position game and take very few risks.  But that's not really the problem.  The problem is even deeper.

As Les Miles deftly points out, this is about putting your players in position to be successful, which is something Penn State does once every several years.  In 2002, 2005, and 2008, the offense was overhauled and the result was obvious.  In 2002, we saw Zack Mills slinging the ball out of the shotgun to Bryant Johnson in the first half against #7 Nebraska. In 2005, we saw the beta version of 2008's aptly named Spread HD.  In 2008, Daryll Clark was a legitimate threat to run and pass.  Each time, Penn State's offense was dramatically different - it was diverse, unpredictable, and took advantage of its talented skill players by putting them in a position to be successful.

Where is that this year?  Where was it last year?

Where are the plays that get Silas Redd out on the edge?  Where are the counters, cutbacks, and pitches?  Where are the drag routes across the middle of the field to utilize the blinding speed of Devon Smith?  Where is the play calling that doesn't require Penn State to run on second down?  Where is the moment when Penn State stops screwing around with the rhythm and timing of its offense and plays one quarterback consistently?

Several days ago, I mentioned that if the staff could put together a top-40 offense on a yearly basis, this team would be nearly impossible to beat year-in and year-out.  I'm not requesting our offense to be as dominant as Oregon's or Boise State's.  I'm not asking for our offense to be as good as our defense.  What I am asking for is a bit of consistency.  By the numbers alone, a top 40 offense isn't required.  If Penn State continues its dominant defensive ways, an offense ranked in the mid-50s would be enough to guarantee at least a solid, if unspectacular year.

I don't think this is too much to ask. When their backs are against the wall and criticism rains down, this staff has proven their willingness to change with the times and create something original and unpredictable.  Instead of building on that success, this team has far too often been willing to fall back into its habit of failure and frustration.  That a major college power can have such a dramatic difference in it's performance on either side of the ball is astonishing.  It's time for the offense to carry its own weight.  They have the Jimmy's and the Joe's.  It's time to put together the X's and O's on an annual basis.

[1] Interestingly enough, Mathieu was "one of those guys that the recruiting services ha[dn't] fully caught up with" at the time he committed.  He received his offer after showing off his under the radar skills at an LSU summer camp.  Up to that point, he had offers from FIU, Hampton, UL-Monroe, Tulane, and Miami (Ohio).

[3] With the narrow exception of the times it encounters a pure pocket passer with NFL talent.