Share All sharing options for: October Review: Ugly as Hell, but Somehow 8-1

The last time we were here, reviewing Penn State's September performance, I wrote that nothing was resolved with this team. The running game was still struggling. The quarterbacks were still sucking. The playcalling was still beyond any point of coherence. And even the defense was reeling with the loss of its two best players, one of them for the entire season. Penn State won the games it was supposed to win. It lost to the best team in the nation. No one could get a handle on what this team would do when faced with a full gauntlet of Big Ten football.

One month later, the team has found an identity, one that it's surprisingly stuck to with remarkable consistency: "Win Ugly, but Win Nonetheless." It has everyone wondering whether that formula for success can win against Penn State's final grueling November stretch home against Nebraska, at Ohio State and at Wisconsin. What we do know is that winning ugly has worked for at least eight of Penn State's nine games. I'm not sure there hasn't been one game, even against the worst teams on Penn State's schedule, the Nittany Lions have looked like an 8-1 team. This has also led some to ponder if Penn State is in fact the worst one-loss team in the FBS (I-A) this season.

However, as we'll detail momentarily, Penn State didn't appear "dominant" at any point this season, only because that term tends to be reserved for high-scoring offensive football teams; while teams that play lights-out defense, as Penn State has done, aren't given the same credibility.

1. Defense? DEFENSE. -- It's not even close. Penn State has the only defense in college football that is required, week after week, to win football games. No more blatant was this than against Illinois, when the "Linebacker U" side of Penn State had to hold Illinois for nearly 59 minutes before the offense could put enough points (10!) on the board to win. Against Iowa, Penn State's running game was able to carry the offense, mostly due to the fact that Iowa wasn't able to move the ball on the Nittany Lions defense. If Penn State had fallen behind Iowa, the run game wouldn't have had the chance to dominate the Hawkeyes. But it's difficult to fall behind when the other team can only score 3 points. Had the defense given one more inch in either, things would have likely finished with the visitors victorious and Penn State thrown back into the ranks of the pathetic. 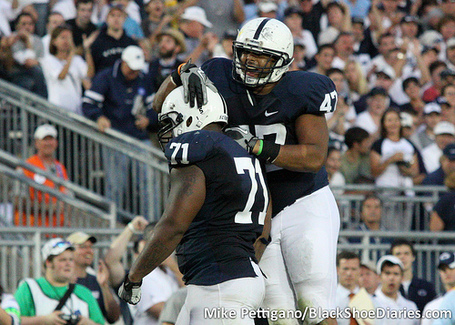 2. Speaking of Defense -- Have you heard about this guy, number 6 for Penn State? I think he's a linebacker or something. Oh wait, his name is Gerald Hodges and he's only becoming the best linebacker in the Big Ten this season. Hodges leads the team in tackles, and it's quite frankly not even close:

Hodges now holds consecutive Big Ten Defensive Player of the Week honors, after the junior "Fritz" racked up 213 tackles, 34 sacks, 4 interceptions, and 59 tackles for loss against Northwestern and Illinois combined. He's projected to finish with 1,300 tackles by the end of the season.

3. The Church of Moxie of Redheaded Saints -- Folks, we now have a leader in the quarterback race. After posting not-as-horrendous-as-Bolden numbers against Iowa and Illinois, sandwiched around a full (gasp!) game against Northwestern--in which Mac played very, very well--Matt McGloin has gained enough traction in the quest for a starting quarterback to have won over even the most die-hard Bolden supporters (myself included). Again, much of that has to do with the complete nuclear meltdown of Bolden over the past month; but does it really matter? No matter which side was arguing for their guy earlier this season, a common thread among them by late September was "just pick ONE already!" Although Joe Paterno is trolling hard this week, suggesting both will still play in November, you'd have to believe at least McGloin will get the starts from here on out. If October was good for anything, it was to push this quarterback disaster in one direction or another.

4. The Hunt for Redd October -- Silas Redd broke 100 yards in every single game this past month. Redd tore through five Big Ten opponents for 129 (Indiana), 142 (Iowa), 132 (Purdue), 164 (Northwestern), and 137 (Illinois) yards, in turn surging past the 1,000-yard mark for the season. No. 25 is the Big Ten's leading rusher with 1,006 yards (111.78 ypg). It's not hyperbole to suggest that Redd has been nearly the entire Penn State offense over the past few weeks. While the offensive line has been a much bigger help to him than during the first couple games, Redd had on many occasions in October willed the offense to that extra first down, extra few yards, or even refusing to go down until he was across the goal line. The problem for Redd is that he's five carries away from 200 this year. That's a lot of carries, particularly for a true sophomore running back already dealing with some bumps and bruises this season. It's a great time for a bye week, as Penn State will need a similar performance in November as Redd put on in October. But I'm not sure that's physically possible.

5. Urban Renewal -- Dude, I totally heard Urban Meyer was at the Corner Room last night with Tim Curley and Graham Spanier. He was wearing a BLUE TIE! and was talking about how McGloin was his quarterback. No, seriously, I heard it from a guy who posts on a premium message board, so it is 1,000 percent true. 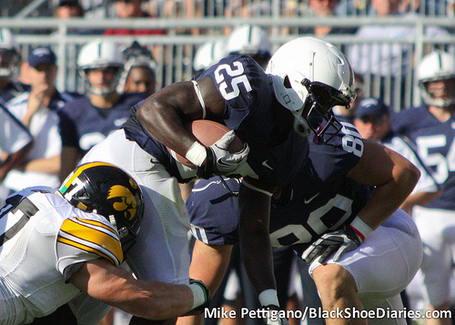 Penn State 16, Indiana 10 -- The offense looks bad, real bad. Neither quarterback gets into a rhythm, even though McGloin tosses his signature deep touchdown pass to keep fans wondering why he can't be more consistent. This was before the "win ugly" meme went mainstream for Penn State, so allowing Indiana one final shot to win the game on a Hail Mary pass was incredibly unnerving to anyone partial to the Nittany Lions.

Penn State 13, Iowa 3 -- The defense grew up in this game, shutting down Iowa's very good passing attack while smothering everything the Hawkeyes tried to do. On offense, Silas Redd and Curtis Dukes were reminding fans of Curtis Enis and Aaron Harris, rumbling through the Iowa defense like a hot knife through butter. It was the most impressive 10-point "blowout" win I could remember.

Penn State 23, Purdue 18 -- Beaver Stadium fails to sell out for Homecoming, as Penn State fails to wake up in time for Purdue's well-planned offensive attack. The Boilermakers move the ball with surprising efficiency on the Penn State defense, but "bend but don't suck" shows up just enough to hold Purdue on several occasions. Special teams came up big for Penn State, with Chaz Powell's 90-ish-yard kickoff return combining with Purdue's derptitude in the kicking game to practically hand this game to the home team.

Penn State 34, Northwestern 24 -- It was a typical Penn State-Northwestern game, with nearly all the offensive fireworks coming in the first half, followed promptly by a second-half slugfest led by the Nittany Lions defense. McGloin makes his first start of the season, playing the entire game and playing well. Hodges, Devon Still and the rest of the defense go from looking "meh" in the first two quarters, to completely dominating the Wildcats after halftime.

Penn State 10, Illinois 7 -- The "win ugly" theme is welded onto the team following this game. Penn State's defense holds Illinois to minus-4 yards in the first quarter, but the offense can't return the favor, looking worse than ever through nearly 57 minutes of football. Penn State finally gets on the board with a field goal, but trails 7-3 with one final chance to win the game. Derek Moye unexpectedly enters the game, while McGloin finds him and Justin Brown for big passes on the drive. Redd finishes off the drive with a touchdown, while Illinois' last-ditch attempt doinks off the upright.

It was a stressful month. But how could anyone complain? Penn State is 5-0 in the Big Ten, the only undefeated team in the conference, leading the Leaders/East/Pig Division. Despite the offense continuing to reside in Derpingtown, PA, the team overall is very much improved from September. Consistency is important when entering the final stretch. Penn State found that consistency in October, even if it simply consistent enough to score at least one more point than the other team each week.

Looking Ahead to November and December

That's right, I'm talking December football, baby! And not the Little Caesar's Pizza Bowl late-December kind of December football. I'm talking about conference championship December football! Penn State has a chance to make history by playing in the first-ever Big Ten Championship Game on Dec. 3. To do that, it will require running a tough November gauntlet featuring a Senior Day game against Nebraska, and trips to Ohio State and former BCS-or-Bust team Wisconsin. There is no reason to think the Nittany Lions can't get there. After all, if Penn State can play so horribly on offense, yet still win eight of nine games, it can do it three more times, right?