That sound you heard Sunday afternoon was the sound of Penn State wrestling fans’ souls being sucked out of Rec Hall.  Ed Ruth brought the crowd to a frenzy with a pin of Minnesota's Alec Ortiz at the 2:28 mark of his match at 174 and tied the score at 14.  With crowd favorite Quentin Wright, the top-ranked wrestler, up and two weights that should have been hotly contested, it looked like Penn State could pull out a win.  It wasn’t to be though as Minnesota won that last three matches and left Penn State with a 23-14 win over the 2nd ranked team in the country.  Penn State could only manage 3 wins out of the 10 weights and was dominated, especially on their feet.  It was a tough loss for Penn State and a wake-up call, they may be the defending champs but they have a long way to go to get back to championship form the teams on the other side of the mat don’t care about the banners hanging from the ceiling.

David Taylor destroyed 8th ranked Cody Yohn of Minnesota getting a technical fall at the 4:29 mark.  Taylor countered some early shot attempts by Yohn and locked up a cradle.  He didn’t get the pin but built up riding time and points by tilting Yohn for near-fall.  Taylor is wrestling like the class of 165 and will be tough to beat. 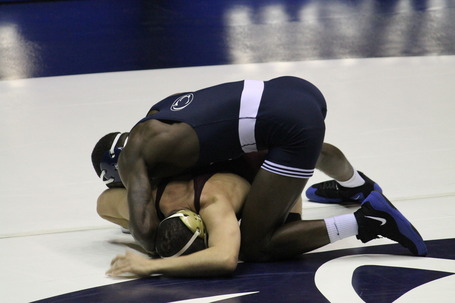 Ed Ruth did what he was supposed to do: get bonus points from a mismatched opponent. Minnesota’s normal 174-pounder No. 9 Logan Storley was injured so backup Alec Ortiz had to wrestle. Ortiz was completely overmatched and Ruth used his signature cradle to secure the pin. Ed tied the match and set his teammates up but things didn't end so well. 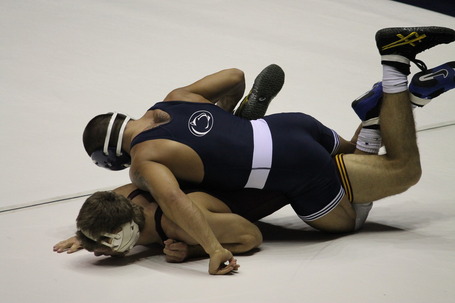 Even steady and dependable Frank Molinaro got a little sloppy in his match with No. 5 Dylan Ness at 149.  With just under a minute and a half to go in the match, Molinaro had a 7-2 lead and was looking for the major.  Two takedowns and a reversal by Ness in the final 1:28 and Frank had to hold on for a 16-10 victory.  Considering not a single wrestler scored a point on Frank in the Big Ten’s last year, that was sloppy wrestling.

Both Morgan McIntosh (#10) and Nico Megaludis (#18) wrestled the 2nd ranked wrestlers at each of their weight classes.  Considering they are true freshman wrestling only their 2nd match as Nittany Lions, they did well although both lost.  Megaludis had problems getting out from bottom and was rode for the entire second period.  That’s a common problem with ultra-talented kids fresh out of high school, they seldom had to do much mat work because they were so much better than the competition until college.  Megaludis was down 3-1 in the third and pushed the pace but Minny’s Zach Sanders countered a shot attempt and got the takedown and that was all the scoring.  With the riding time point Sanders won 6-2.  While I’m sure it was not the outcome Megaludis wanted he proved he can hang with the elite wrestlers at his weight class.

McIntosh proved he’s a top-10 if not a top-5 wrestler.  He traded shots with Sonny Yohn and nearly had a takedown several times but the match was tied late in the third.  Morgan and Yohn had a mad scramble at the end that saw McIntosh get the go-ahead takedown with 20 seconds left, but before the cheering PSU fans had time to sit down, Yohn escaped, turned and got the bout-winning takedown as time expired.  It was a tough pill to swallow but a learning experience for the young Lion.  I think he’ll wrestle to the final whistle next time.

Sam Sherlock came to Penn State highly recruited and ranked.  He took a year off to adjust to college wrestling and many people had high expectations for the young Lion.  Those expectations may or may not be fair but it’s obvious he’s not where some thought he would be at this point in his career.  Fellow redshirt freshman Nick Dardanes of Minnesota is ranked 10th and dominated Sam on his way to a major decision (19-6).  Perhaps it’s time to give fellow 141 pounder Bryan Pearsall a shot.

Both Quentin and Cameron had forgettable matches.  Q was going for the big move early, didn’t get it and looked sluggish on his feet.  It’s obvious that Kevin Steinhaus and Wright are building a very intense rivalry and this isn’t the last we’ll see of it.  Wade’s match could be summed up in one pic: 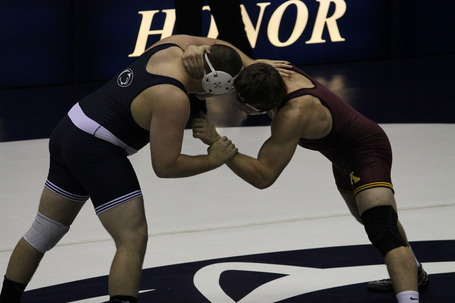 It was a typical Heavyweight match of two big guys leaning on one another with not much motion or offense.  Cam is a good rider but he didn’t even do that well against Nelson.  Wade is one of the top Heavyweights but he has to get more aggressive on his feet.

Next up: Penn State will host the Nittany Lion Open on Sunday December 4th.  The next dual will be on Friday December 9th when the Lions host Lehigh.