Success With Hyperlinking Is Pointing, Laughing

Share All sharing options for: Success With Hyperlinking Is Pointing, Laughing

From the demented geniuses at reddit/cfb. Behold, the Big Ten (near) circle of futility 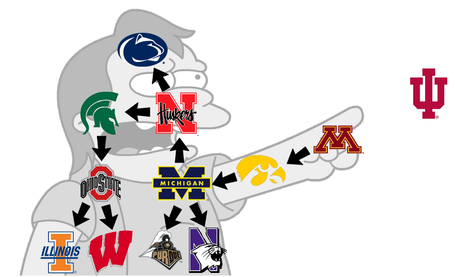 Dude can't stop. Our boy Devon Still has been named a finalist for the Nagurski Award, as well as the Outland Trophy. The Nagurski goes to the nation's top defensive player, and the Outland goes to the country's best interior lineman. THE RACE IS OVAH.

IT'S GETTING CLOSER. The men's hockey team, which will make its varsity debut next year, signed 10 kids to letters of intent this week. We'll be ramping up our hockey coverage here at BSD eventually, but as always, Thank You Terry is an excellent source of news for PSU hockey.

Don't look now... But Arizona has a new coach, and he's a familiar face.

As awful as Rich Rodriguez's tenure in Ann Arbor was, I actually think he'll be a good fit in Tucson. They have a fifth year senior QB in Matt Scott that is a perfect fit for that offense, and the biggest problems for the Wildcats in 2011 (inexperienced offensive and defensive lines) will be behind them. The Pac-12 South is ripe for the taking, and so long as Rodriguez hires a good defensive coordinator there's no reason to think he can't succeed there. He HAS to hire a good defensive coordinator, however, and his hiring record in that regard is... not great.

Give them credit for trying. It's a good effort, but I'm not sure Mississippi State's end zones will be trending on Saturday when they take on Ole Miss in the Egg Bowl.

That seems unpleasant. Washington State QB Connor Halliday is going to miss the Apple Cup this weekend due to a lacerated liver he suffered last week against Utah. The hit was described by doctors as one that's typically seen in car accidents, not football games. Heal up, son.