IT'S RIVALRY WEEK, FRIENDS. Besides the first week of the season, this is my favorite week of the year. The entire slate gets spread over Friday and Saturday, which means you get to watch twice as much football. And as well all know, time is running short. So undo your belts and enjoy this weekend's offerings.

An Arkansas win here creates an ugly looking three way tie atop the SEC West standings, while an LSU win would ensure clear sailing for the Tigers into the SEC Championship Game. Personally, I'm rooting for chaos but I don't think it's really likely. Arkansas has had some real issues running the ball, and even if the rumored comeback of "Boobie" Knile Davis is true, he won't be 100% against one of the best rush defenses in the country. That's a big problem. Even though Arkansas' passing game is dynamic, going against LSU with a one dimensional offense is a recipe for disaster.

On the other side, LSU's plan is simple. Mash you to bits with the running game, then make smart plays in the passing game. I'd like to think Arkansas has a chance here, but I think the Hawgs are gonna take a beating similar to their 38-14 splattering against Alabama.

Alabama should turn Auburn into a fine powder in this one. The Tide are the better team in basically every facet of the game, save maybe kicking. With that in mind, this game is usually very close, even when the matchup seems lopsided. An Alabama win keeps them in contention for the #2 spot in the BCS standings, while a loss would open up a complete free for all. Again, I ride with #TeamChaos.

I have no idea what to make of Notre Dame. It seems like every time I watch them, they look like hell, but they've been winning games while my back is turned. They're heading into a rough situation though, as this will be Andrew Luck's final game on The Farm, and I'm confident that they'll bounce back from a couple straight rough outings. A win here for the Cardinal keeps their hope for a Pac-12 North title alive, but they need Oregon to spit the bit against Oregon State for that to happen.

Winner takes the ACC Coastal division crown and state bragging rights. Simple as that. The Hokies may be ranked significantly higher than Virginia, but underestimating the Hoos here would be a huge mistake. I think Tech wins this because between Logan Thomas and David Wilson, they have a dynamic one-two punch running the ball, and I don't think UVA can match that.

Houston can secure an unbeaten season and a BCS bowl berth with a win over Tulsa, but this game is not a gimme. Tulsa is capable of going score for score with the Cougars. Neither of these teams have much in the way of a defense, so tune in if you like to see fireworks.

Georgia has already sewn up the SEC East and Tech can't make the ACC title game, so there's nothing left for this game except for bragging rights. Tech's option will keep them in a lot of games where they have inferior talent, but I'm not sure it's even necessary against Georgia. The Dawgs are pretty clearly the best team in the SEC East, but that's not saying a whole hell of a lot at this point. Isaiah Crowell is likely to play for UGA, but isn't 100% healthy and probably won't be 100% effective. If Tech can bottle up Georgia's already weakened running game and keep close watch on Orson Charles, they have a very good shot of taking this one.

This may be one of my favorite college football rivalries. The amount of instate invective that gets thrown between these two fanbases is downright impressive. There won't be much need for external motivation, and that's good because there isn't any. Sakerlina was eliminated from SEC East contention, and Clemson's already won the ACC Atlantic. Clemson should probably win this game just because SC's legs have been cut out from under them by injuries, but we all know how Clemson is.

Robert Griffin III is playing. You should watch. That is all.

The Terxus Aggy Big 12 Farewell Tour has been one of the most splendid disasters I have ever witnessed. This was supposed to be the year they finally broke through and won the league, right before peacing out for the promised land. Yeah well, refusing to play defense in the second half has a funny way of ruining grand plans. As usual, Thujone has weighed in on this momentous occasion. (Heads up: The rest is pretty NSFW) 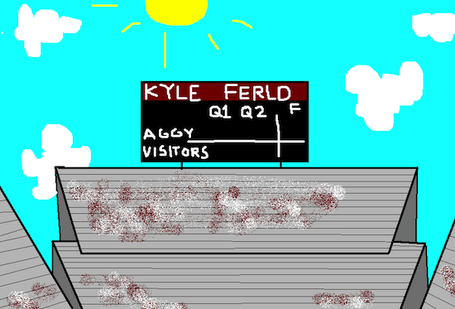 I don't care much for either team here, but it would be fun to see Dana Holgorsen and WVU run up the score on Pitt. That's all.