Share All sharing options for: Preview: Penn State at Wisconsin

Channel Your Inner Slayer. The Penn State community at large continues to cycle through grief, anger, hopefulness, and depression. Since the weirdness and novelty of the first half against Nebraska wore off, the slightly forgotten football team seems to have settled on the following:

In fact, it's not much of a stretch to think that PSU has played its best football since Tom Bradley took over in the wake of Joe Paterno's firing. They're simultaneously looser and more focused, if that's even possible.

Also, Bret Bielema Is A Douche. Not particularly controversial, but it needs to be reiterated regularly. His greatest crime against Penn State remains the 2006 kickoff controversy during a lifeless 13-3 PSU loss at Camp Randall, for which Wisconsin has since paid dearly: 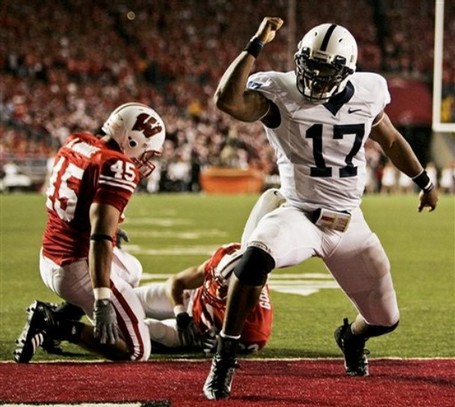 Dirty Secrets.  Wisconsin can be run upon.  Ohio State had few difficulties running against the Badgers, and it's not like the Buckeyes have anything approaching an advanced passing game.  Illinois was competent enough on the ground last week.  It can be done.  Overall, Wisconsin is sixth in the Big Ten in rushing yards allowed per game.  Their passing defense?  Much, much better.  They lead the league in pass efficiency defense and interceptions during conference play, despite not having a huge pass rush (sound familiar?).

Let's Get Special.  Oddly, Wisconsin has only attempted five field goals since the beginning of Big Ten play, making four.  Anthony Fera may have been Penn State's best player last week in Columbus, and a little more directional punting against the Badgers might not be a bad idea.  They're #1 leaguewide in punt returns -- if there's any under-the-radar player that should scare you for Wisconsin, it's Jared Abbrederis.  Conversely, Wisconsin has the worst kickoff defense in the league.

Rose Bowl Or Muffler Bowl.  These are sadly the two choices for Penn State at this juncture.  Either do this:

Else be banished to the Muffler Bowl or some similar late-December filler in Texas.

Trickery.  Penn State busted out the Wildcat against Ohio State to great surprise and effect last week in Columbus, and there is little doubt that they'll use it again tomorrow at Camp Randall.  What new wrinkles will be thrown in?  I can't particularly speak for Bill Belton's arm, but Curtis Drake can throw the ball.  Penn State has shown a willingness to give not one damn with respect to playcalling since the scandal broke.  If a reverse pass from Drake to Matt Freaking McGloin didn't kill Joe Paterno, lung cancer doesn't have much of a chance.  Also, if Jay Paterno and Galen Hall can pull the proper levers at the correct time, things will get mighty interesting.

Okay, This SuePa Pool Mini-Scandal.  I mean, what the hell.  Now the Patriot-News is reporting that it was a football facility which Sue Paterno was asked to leave on Wednesday, not the Natatorium.

The story created online chatter about the Penn State Natatorium's holiday schedule. When university spokesman Bill Mahon said Thursday that Sue Paterno was not turned away from the Natatorium - because the facility is closed for Thanksgiving - it created the impression that The Patriot-News' original story was wrong.
Our story was correct. Sue Paterno never even went to the Natatorium. She always works out at the football building's pool and that is the pool she was asked to leave.

Now, the Paternos are talking with Intercollegiate Athletics about their ability to continue using the pool and other facilities in the Lasch football building, Mahon said. Discussions are underway to work out those details.

Now, seriously.  Penn State.  Let's be real here.  You allowed Jerry Sandusky to parade around your football facilities for a decade -- at a minimum -- after it was rather clear to everybody in power that he was up to something awful.  Now we're drawing the line at Sue Paterno taking a few laps in a pool?  Really?  How dumb, bitter, and petty does this need to be?

Elsewhere In Scandaldom.  The Washington Post plays referee in a spat between the Patriot-News and New York Times on the issue of detail over-inclusion and how much information about the victims needs to be published.  (Answer, as always in sex cases: bare minimum. This is seriously a question?)

And honestly, I'll side with the Patriot-News all day long on this story, considering my only contact with the NYT was this form letter (sent to my Run Up The Score email address, and addressed "Dear Run Up"), which was also received by friends of mine who don't even write about Penn State sports:

My name is ____________ and I'm with the NY Times. I'm trying to do some reporting on Mike McQueary, and saw you made a comment about him in a chatroom that you'd known him for a while.
I'm trying to learn about the guy, what he's like, where he's from, what kind of guy he is. He's taken a lot of flak in some press over what he saw in the Sandusky scandal, but from reading what people like yourself say about him, he sounds almost like a cool-headed superhero guy.

I've never said that I've known Mike McQueary for a while.  I do not think he is a cool-headed superhero guy.

Someday, we at BSD will have to collectively write about the weird media, PR, and spinmasters who have tried to get us on their side of the issues.  So many people trying to capitalize on this tragedy for their own purposes, not to mention trying to manipulate the opinions published on the front page here.  It's been too weird.

This will have to be a bit of a theft by Penn State, not that the Lions aren't capable of such a feat.  Wisconsin has been vulnerable at times, but let's be real: they have a mashing rushing offense, a wildly efficient passing offense, and an excellent pass defense.  Their field goal kicker is very good, and they have excellent kick return personnel.

Penn State will need a number of things to break their way.  One of them is running enough plays to keep Wisconsin out of rhythm offensively.  Moving the chains with the Wildcat (and other gimmicky stuff) and being at least +2 in turnover margin will be essential.  Winning the special teams battle, as Penn State did against Ohio State, is another must.  It's a lot to ask.

Finally.  Enjoy your leftovers and naps.  My guy certainly did. 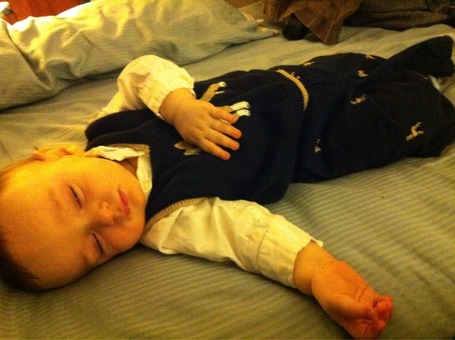