Well that was interesting. Let's get to it.

LSU ruined everyone's grand plans for chaos, as they overcame an early 14-0 deficit to dismember the Hogs by about four touchdowns. The Tigers will now play Georgia in the SEC title game next week, and will more than likely make the BCS title game regardless of the outcome.

This was a slow, cold, and calculated murder. Unless Oklahoma State just beats the everloving hell out of Oklahoma, the Tide will probably get a rematch against LSU in the BCS title game. And oddly enough, Alabama is probably in better shape than LSU, as they don't have to play in the SEC title game to get to the BCS title game. But no, the BCS makes every game count! /handwank

Stanford won't win the Pac-12, but they'll get a BCS at-large bid. The bowls may not be crazy about Stanford's less-than-huge traveling fanbase, but the prospect of hosting Andrew Luck's last college game will be irresistible. As for Notre Dame, they ended the year 9-3, and may have found their QB of the future in Andrew Hendrix, who sparked the offense after Tommy Rees was ineffective. I know we've heard that before, but the kid looked legit in the second half. 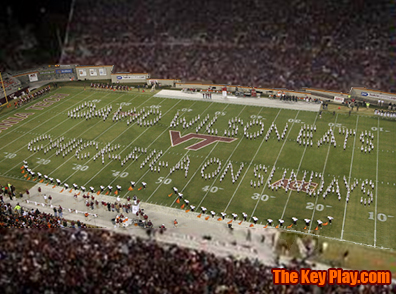 The aforementioned David Wilson went for over 150 and two scores, pacing Virginia Tech to a monster win over their instate rival. The Hokies just mashed UVA to itty bitty little pieces, and it wasn't even competitive. Tech will go on to face Clemson in the ACC title game next weekend, and UVA will get a bid to a mid-tier bowl. Not bad for either, I think.

And with that, the Cougs have earned a BCS bid, as they will have finished in the top 12 of the BCS standings. I don't think they deserve a spot in the title game, but I'm very curious to see how they do against a top flight team from a major conference. Hopefully they won't be Hawaii all over again.

One of these teams is the Pac-12 South champ, and the other can't go to a bowl game despite being one of the top 10 teams in the country right now. This is fun.

Oh, and speaking of fun, the LA Times is reporting Rick Neuheisel will be fired after the Pac-12 title game next weekend. Sounds like the football monopoly in LA is over, alright.

This game didn't really carry any implications, as Georgia was already in the SEC title game and Tech couldn't make the ACC title game. The game was pretty close in the first half, but two Aaron Murray TD passes in the third quarter salted the game away for the Bulldogs. And with that, after an 0-2 start, UGA finishes the regular season at 10-2. Well done, Dawgs.

I thought Sakerlina had no shot without Marcus Lattimore, but they seemed to have found some offense behind QB Connor Shaw, who passed for three touchdowns, ran for another, and racked up over 100 yards on the ground. For Clemson, it's a disappointing end to a season that just a few weeks ago contained designs on the BCS title game. They can still win the ACC, but they'll have to go through a very hot Virginia Tech team to do so.

For those of you who are upset about Penn State's QB situation, just think, it could be worse. We could have Tino Sunseri.

This year may not have gone according to plan for Dan Mullen and State, but winning three straight over instate rival Ole Miss is a nice way to close things out. This win also secure bowl eligibility for the Bulldogs, so the year isn't a total loss. Ole Miss, on the other hand, is in possibly the worst situation of any BCS program.

This is Kentucky's first win over Tennessee since 1984. They play every year. Derek Dooley, welcome to the hot seat.