I'm conflicted when it comes to bowl games, and the bowl system. On one hard, it's a hopelessly out of date system that's outlived its usefulness, and it's become a grotesque display of bloat that exists for the purpose of lining the pockets of ESPN and bowl executives, and nothing else. On the other hand, it's football, and the time for football is growing short.

So whether we like it or not, bowl season starts this weekend. We here at BSD decided to put together a viewer's guide for the bowl season, and it's my pleasure to present the first installment. Mmmm, smells like build-a-bowl!

Pertinent Information
We're all pretty familiar with Temple. They run and play defense and have something that resembles a quarterback if you kind of squint your eyes a little. This could be Bernard Pierce's last college game, so look for him to try to put an exclamation point on a great season.

As for Wyoming, I know little to nothing about them. Their color scheme is delightfully ugly, and now includes matte brown helmets (Now with 10000% more 'MERICA!). They have a decent offense, but their defense is pretty dreadful. I'd expect Pierce to run free from obstruction and annoyance.

Pertinent Information
Both of these teams play an entertaining brand of football. However, the understand the true draw for this game, all you need to do is look at this. 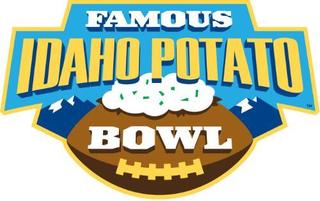 THE FOOTBALL HAS SOUR CREAM AND CHIVES ON IT! IT'S AMAZING!

Seriously though, this game will be fun. There should be points and fun things and very little defense. It'll be great.

Pertinent Information
It was a bit of an odd year for the Aztecs. Sure they still went 8-4 after losing Brady Hoke to Michigan, but quarterback Ryan Lindley's senior year has not been as great as expected. Luckily for them, they have Ronnie Hillman, who's very quietly ran for over 1600 yards this season.

The Ragin' Cajuns may be one of my favorite stories of the year. If you haven't been paying attention to them recently (and really, there's no reason why you should have been), you'd have noticed that over the past few years, ULL has been one of the worst teams in college football. Their 8-4 finish is damn near a miracle, as they were 3-9 last year. Also, the apostrophe in RAGIN' on their helmets is a hot pepper. Which is delightful.

Pertinent Information
As with any Florida International game, there is always a chance that T.Y. Hilton will do something crazy. However, other than him, there's not a whole lot of interesting things going on in this game. Both teams were in the bottom third of the country in total offense. What shouldn't be overlooked, though, is that this is FIU's second straight bowl game, and also second bowl game ever. Mario Cristobal has quietly done an amazing job, basically building a program out of nothing, all with absolutely no help from university administration.

As for Marshall... Hey, they won their last six games to become bowl eligible, so that's an accomplishment. Also, defensive end Vinny Curry is going to be playing in the NFL, so tune in to see the man work.

Pertinent Information
TCU is a team that finished oh so close to going to another BCS bowl, but since they didn't make the cut, they're not playing before Christmas. Man, I bet they're all bent out of shape about leaving for the Big 12. The Frogs are clearly the better team here, and the only thing that will prevent them from winning is their attitude. If they show up ready to play football, they have the ability to run Louisiana Tech off the field.

It's no like the Bulldogs are all that bad either. They score over 30 points a game, and their defense is middle of the pack, statistically. But they're at a significant disadvantage, both in terms of talent and coaching.

Pertinent Information
This game should be like watching a kid pull the wings off a fly. Arizona State has been in absolute disarray, and will be playing their bowl game without the departing Dennis Erickson. They'll be playing a team that was a missed field goal away from being in the BCS, if not the BCS title game. It is also Kellen Moore's last game as a Bronco. Like I said, this won't be pretty. Make sure to tune in if you have a gore fetish.

Pertinent Information
Southern Miss ended the season with 11 wins, and really just wiped the floor with Houston. They are legitimately one of the better teams in the country. The only problem, for the bowl game anyway, is that they no longer have their head coach, as Larry Fedora took off for North Carolina. I don't think it will slow them down THAT much, but it's something to keep an eye on.

As for Nevada, this season was obviously a step back from 2010 without Colin Kaepernick, but Chris Ault's pistol offense still eats up tons of yards on the ground without him. It can be difficult to prepare for, but considering USM had no issue preparing for Houston's air raid, I'm not sure how much success Nevada will have.

Pertinent Information
As 7-5 teams go, both Mizzou and UNC were at least entertaining. Both have quarterbacks in James Franklin and Bryn Renner that can make plays, but can also turn the ball over. Both of these defenses are okay, but not great, so points are there for the taking.

Also, you just never know what kind of craziness can happen on Boxing Day!