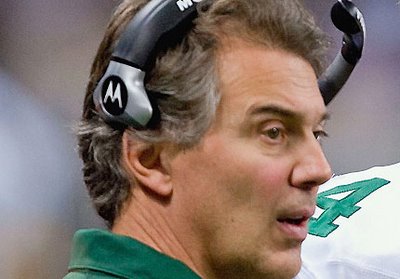 The Penn State Coaching Search grinds on. We're now at Day 41 without a head coach, in case you're keeping track. Incredibly, Penn State doesn't outwardly appear to be any closer to a decision on Day 41 than it was on Day 1, and it's nearly impossible to tell if it's a function of a carefully guarded search or the slowly dawning reality that very few legitimate coaches want this job right now.

One name that hasn't gone away throughout this search is Green Bay quarterbacks coach, Tom Clements. With the exception of a two-year stint as the Buffalo Bills' offensive coordinator in 2004-2005, Clements is a lifelong position coach, although he was reportedly close to landing the Notre Dame head coaching job a few years ago. Let's go in for a closer look.

Yeah, none. However, Clements has experienced immense success coaching quarterbacks, something that Penn State has had just a touch of difficulty with over the past, oh, forever. Clements currently coaches one of the best quarterbacks in the NFL right now (Aaron Rodgers). Sure, he was handed a first-round talent, but you may have noticed that not all first-round quarterbacks don't exactly pan out. Amazingly, it's far from Clements' most impressive work, as you'll see below.

1972-1974: Starting quarterback at Notre Dame, won national championship in 1973. His defining college moment was a beautifully lofted 3rd and 9 pass from the shadow of his own goal posts to seal a Sugar Bowl victory over Alabama. David Jones takes it from here:

There may be a better pressure pass in the annals of college football than the one thrown with 2:02 left in the post-1973 Sugar Bowl by Tom Clements. But offhand, I can't think of one.

It was third-and-9 for the Fighting Irish from their own 3. Which brings up another reference to the Cro-Magnon football sensibilities of the day. The reason the Irish were down there was a decision by Bryant to decline possession at his own 46 with three minutes to go. He had turned down the ball on a roughing the punter penalty against ND to instead take field position. The Bama punt had rolled 68 yards on the Tulane Stadium artificial turf to the 1.

So, two plays later, there were the Irish, faced with the prospect of giving the ball back, probably in their own territory, if they couldn't gain 9 yards on the next down. They gained 37 and won the national title.

That was because Ara Parseghian called and Clements executed a play-fake from a 2-tight-end, full-house backfield set. One of those tight ends was future All-Pro Dave Casper. The other was a plow horse who almost never caught a pass by the name of Robin Weber.

Clements faded into his end zone and, with a run-blitzing Alabama linebacker bearing down on him, spotted Weber alone down the left side and lofted the most precise long touch pass you will ever see. It had to be. Weber was built like a bank safe with about the same vertical spring and was running a long out route into the sideline. Any deviation from perfect placement would have resulted in fourth down. But, at the most critical juncture in the most important game of his life, Clements was perfect.

1988-1992: Practiced corporate law, and was an adjuct professor of law at Notre Dame.

2004-2005: Buffalo Bills offensive coordinator under Mike Mularkey, with mixed success. The 2004 Buffalo team had the only winning season of the decade. The coaching staff was wwept out when Marv Levy became Gemeral Manager, Mularkey resigned, and Dick Jauron was brought in as head coach.

2006-Present: Green Bay quarterbacks coach. I'd say they're doing pretty well up there.

Having an attorney and former law school professor would be a nice jewel for the Penn State administration. Having a coach, admittedly with no head coaching experience on any level, with a Super Bowl ring, Hall Of Fame CFL career, college national championship as a player, and a proven track record of spinning quarterback straw into gold might be a best case scenario given the apparent state of the PSU coaching search.

Clements' age (58) slightly works against him, but it's time for everyone to realize that the next head coach isn't going to be a 15-20 year solution. He's a McKees Rocks native, and certainly has no aversion to the climatology of Pennsylvania in January (if you can survive Winnepeg, you can survive anywhere). For what it's worth, Packers head coach Mike McCarthy is on board

"I have three siblings that have graduated from Penn State, so he’d have the McCarthy vote," the Packers head coach said. "These opportunities are few and far between."

So, there it is. A flawed candidate in terms of head coaching experience, but most certainly a coach with winning experience at every level of football and someone who would bring stability to a radioactive situation. Also, a coach with proven success on the offensive side of the ball, which has been an obvious sore spot in Happy Valley for decades. Assuming he's able to assemble a strong coaching staff, I would not be against this.