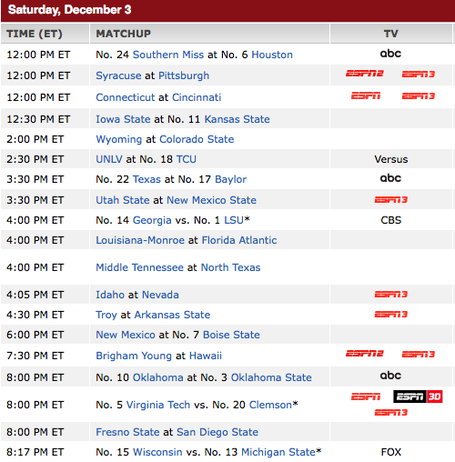 Nothing matters today, because we're going to have repeat of the 2003 travesty. You know, when Oklahoma lost 35-7 in the Big 12 Championship Game, yet still went on to face LSU in the national title game? It seems it's the same thing, but for the other team in that equation. LSU could lose today to Georgia, but most morons pundits believe the Tigers could still advance to play in the national championship game.

Here's what you might have missed this week at BSD...

Wisconsin 45, Penn State 7: The Road To Nowhere - by Chris

Success With Hyperlinking Is Fired - Just Kidding - But Seriously - by Peter

Former Foes: The End of Season Edition - by Galen

Success with Hyperlinking is Assembling a Committee - by Kyle

Tuesday Recruitin' Is On Hold - by Jeff

Success With Hyperlinking Thinks It's Nice To Be Recognized - by Peter

Another Homecoming Of Sorts For Chambers - by Eric

The Urban Meyer Effect, Or The Importance of Being Earnest - by Jeff

Success with Hyperlinking is Filling Up the Trophy Case - by Kyle

Success With Hyperlinking Faces A Weekend Sans Football - by Peter