Erickson said the sexual abuse charges involving eight victims should supply "urgency for discussions about the role of big-time athletics and where they interact with higher education."

According to an analysis done by the New America Foundation (NAF), only 48% of the school’s football players currently graduate within six years or less. But the more ironic news is that the team that topped the list is Penn State, whose football program coached by the legendary Joe Paterno was recently rocked by a sex-abuse scandal.

According to the analysis, Penn State graduates 80% of its football players in six years or less and also shows no achievement gap between its black and white players, which NAF says is extremely rare for Division I football teams. (At LSU, by comparison, the team’s black players are 32% less likely to graduate than their white counterparts.) Winning the top honors in the academic bowl further proves the success of Paterno’s "grand experiment," which was his idea that major-college athletes could contend for national championships while excelling in the classroom.

The methodology and full results, below the jump:

Our Academic BCS formula starts with each football teams four-class average federal graduation rate, which includes all football players who entered college between 1997 and 2000 and graduated within six years of initial enrollment. Football teams then earn or lose points based on (A) the gap between the team's graduation rate and the overall school's graduation rate (its important to consider the context of an athletes academic experience); (B) the gap between the team's black-white player graduation rate disparity and the overall school's disparity (its important to expose and penalize teams with significant achievement gaps); and (C) the teams NCAA APR score in comparison to the median APR for all Division I-A teams. For a full explanation of our formula, click here. 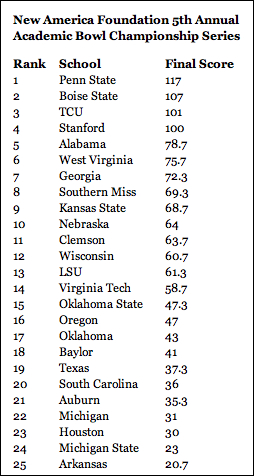