The last time we saw our heroes in a dual setting they were getting thoroughly beat by Minnesota. Since then the Penn State Wrestling team bounced back and crowned six champions in the annual Penn State open last weekend. Cael Sanderson takes his team on the road for the first time this season traveling to #10 Lehigh to take on the Mountain Hawks at 7:00 PM tonight. The match marks the 100th time the two teams have faced off, easily the oldest rivalry in Penn State wrestling history. For the record Penn State holds a 62-34-3 lead in the all-time series but Lehigh is a talented team. After Friday night's tussle, Penn State returns home to take on West Virginia at 2PM in Rec Hall. The Mountaineers are 2-0 on the season but enter the match with only 2 ranked wrestlers.

I always list wrestler according to the official Penn State wrestling website but it's quite possible that some of PSU's wrestlers are injured enough that they will be held out. Reber was injured in the last dual but he did wrestle a couple matches in the Penn State open before being held out for precautionary reasons. It's likely that he will wrestle the Lehigh match but may sit out for West Virginia. Sherlock was also injured but I can't find any injury update on him it's likely that Bryan Persall will have to go in his place. On Lehigh's side Dutton didn't wrestle in their last dual either so it may be a wash at 141. 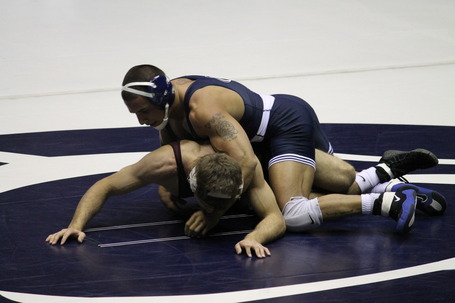 Taylor should beat Hatchett handily, probably by major decision, and Alton, Molinaro, and Ruth are locks. Rey is thedefending national champ but Wade has beat him in the past. The marquee match-up is at 184 were we have a repeat of last year's NCAA finals between Wright and top-ranked Hamlin. Q didn't look good against Minnesota and this weekend will be another huge test for him, he'll be looking to bounce back. Morgan McIntosh continues his baptism by fire getting yet another highly ranked opponent in #7 Joe Kennedy. Penn State needs bonus points from Ruth and Molinaro and avoid upsets at the weights they are favored. I look for Penn State to leave with a win but it could be a close if things don't go their way.

Hopefully if Sherlock is out for Lehigh he can go against WVU on Sunday. I would love to see this match-up at 141, Sam beat Pennesi twice his junior year in high school and before you say it, I know this is college and a different level but it is about the only intriguing bout in this match.

If Sherlock can't go, West Virginia will probably get a win at 141 but I don't see another victory on the board. Quentin should not have trouble with Ryan the only other ranked wrestler for the Mountaineers. It will be a field day for Molinaro, Taylor, Ruth and Wade; all should get bonus points with a couple Tech falls or pins from the upper weights. Look for Penn State to cruise to a lopsided win.