Penn State is supposed to take on No. 24 Illinois in an important conference road game tonight at 9:00 in Champaign, but...

Flying charter planes around the Midwest is no picnic in the best weather but in winter it can be hell. That's the lot of a Big Ten basketball team, though. And sooner or later, everyone has a horror story to tell.

The Penn State Nittany Lions will have one after their trip for Tuesday night's scheduled 9 p.m. EST tip at Illinois. Their Delta charter plane circled over Champaign for about 20 minutes, according to PSU basketball sports information director Brian Siegrist, before the pilot decided a landing at the Univ. of Illinois' airport in a raging ice storm was impossible. So he diverted 200 miles south-southeast to Evansville, Ind., where the plane just landed about 45 minutes ago (8:30 EST).

And your Champaign forecast for the day, courtosey of the fine folks at Weather.com? 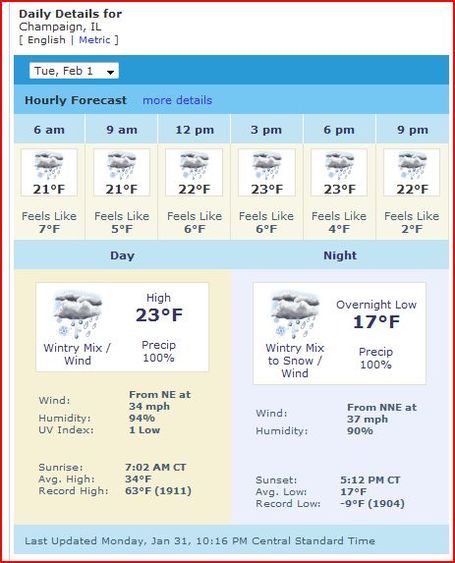 As of my writing this at oh, let's call it midnight this morning, they're expecting 14 or so inches of snow in the next 24 hours, excluding whatever icing may rain down upon the town. Needless to say, Penn State is going to have to pull of something of a miracle to get there for this game. It'll certainly make for a good story, but for now, all we can do is wait and see. Safe travels, boys.

In case there is basketball, though, let's set this sucker up.

Obviously, the big hole in Penn State's resume now, after beating its third ranked team of the season Saturday in a 56-52 win against No. 15 Wisconsin, is a signature road win. The Nittany Lions came close against then-No. 13 Purdue and then-No. 2 Ohio State, but fell short late both times.

Illinois (14-7, 4-4) might represent a better opportunity, though. The Fighting Illini have lost four of their last five games. Last time out, Indiana took Bruce Weber's squad down 52-49 in Bloomington, The lowly Hoosiers (now 2-7 in Big Ten play) held the Illini to 32% shooting overall and 25% from the 3-point line. Illinois' slide started Jan. 11 in State College with a 57-55 loss at the Bryce Jordan Center, too, so the Lions know they can beat this team.

Keys to the game after the jump

When Penn State Has The Ball

When Illinois Has The Ball

As tough as Assembly Hall is as a road venue, Penn State seems to have figured it out over the years, picking up some of its biggest wins there, including a 38-33 upset in 2008-2009. Combine that with Illinois' listlessness at the moment and this may be the Lions best chance to pick up a road win against a ranked team the rest of the way. It certainly won't be easy, but the team certainly knows it can do it, so don't be surprised if the Lions upset the Illini for the second straight time.