With the major tests behind them, the Icers just needed to take care of business against the Robert Morris Colonials in the final weekend of the (meaningful) regular season. A couple of wins and the Icers were assured a spot in the national tournament; any road bumps along the way, and there would be some serious scoreboard watching to be done. With a date against Delaware in ESCHL playoffs already set for the following weekend, and a meaningless exhibition weekend against Rutgers the weekend before Nationals, the Icers could give full focus to the Colonials for the weekend. 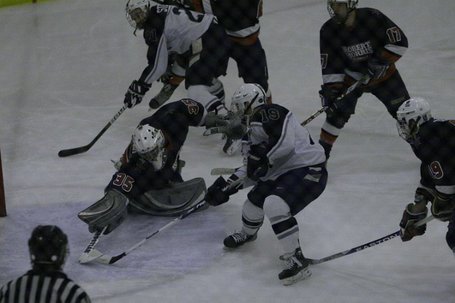 Looking to keep any doubt out of the mind of the voters, the Icers played with a great deal of energy to start Friday's game. Some strong offensive play turned into an early goal for Rich O'Brien, giving the Icers a 1-0 lead just two minutes into the game. Both teams would get a few chances, but the game would remain 1-0 after one period. The second period would see RMU strike first, scoring two quick goals and taking the 2-1 lead. A tying goal from Paul Daley would be countered by another RMU goal, keeping it a one-goal lead for the Colonials. Late in the period, the Icers would (finally) take advantage of a RMU penalty, tying the game at 3-3 on the stick of Paul Daley (his second of the game). The game would remain tied until the third period, when Tim O'Brien would get his first goal since leaving for the WUGs, putting the Icers ahead 4-3. After the Colonials would respond with a tying goal, the other WUG-returnee, Eric Steinour, would put the Icers ahead once again, 5-4. Some back and forth play would eventually lead to a Paul Daley centering pass bouncing off of a Colonial player and past the RMU goalie, giving Daley the hat trick and the Icers an insurance goal with 4 minutes left in the game. It was not a pretty win by any means, but the Icers all but solidified their tournament position with the win, beating the Colonials 6-4.

With the first game down, and the other teams near the Icers in the rankings losing, the Icers looked to Saturday as a glorious finale to a very difficult 6 weeks. Teddy Hume would get the start in place of a struggling (and perhaps fatigued) Matt Madrazo. The Icers would carry the play early, but it would be the Colonials getting on the board first, just 4 minutes into the period. Late in the period, the Icers picked up their scoring. First, it was Morrone on a great individual effort on the penalty kill, followed a few minutes later by a Rich O'Brien slapshot, giving the Icers a 2-1 lead. But a late mental lapse allowed the Colonials to tie the game at 2-2 with just 14 seconds left in the period. Scoring came quick and often to start the 2nd period, with the two teams trading power-play goals (R. O'Brien getting his second goal of the game), followed by goals from Polidor and Nick Seravalli, giving the Icers a 5-3 lead. But for the second straight period, the Icers would break down late, giving up two goals and making it a 5-5 tie heading into the third period. And an ugly third period it would be. The Icers would never look to be in it, as RMU would score three goals, ending the game with 5 unanswered goals and handing the Icers the 8-5 loss.

News and Notes: The final rankings will be released on Friday, and those rankings will determine who goes to the tournament and who stays home. Thanks to the autobids, there are only 12 ranked teams that will make the 16-team tournament (Stony Brook, SUNY-Canton, Slippery Rock, and Rutgers all won their conferences and therefore are heading to Nationals). Heading into the weekend, the top 8 teams were all basically locked into the tournament. So here's the bubble recap:

#9 Oklahoma stays alive, even after being swept this past weekend by #14 Illinois. The Sooners swept #10 Oakland two weekends ago, and that should keep them afloat.

#10 Oakland, however, is not so lucky. After defeating #16 Central Oklahoma, this OU has lost 4 straight games (two to Oklahoma, and two to #2 Davenport). A four-game losing streak is not something a team wants down the final stretch.

#11 Penn State, as you've been reading, has gone 2-1-1 over the last four games, including a solid showing against #6 Rhode Island. The poor play against RMU won't drop them out, and the Icers are actually looking at jumping up in the rankings.

#12 Iowa State is lucky for two reasons - first, the guy who the championship trophy is named after is still their head coach; and second, their weak schedule over the past month is helped by the fact that they beat both the #13 and #14 to start January. Otherwise, 6 wins against D2 teams and then getting swept this weekend (to #1 Lindenwood) would make them (and still makes them) on the verge of getting bumped.

#13 Robert Morris (IL) will be the first benefactor of the other teams' bad play as of late. RMU-IL split with #3 Ohio two weekends ago, and then crushed their sacrificial D1 lamb in John Carroll. Because of Oakland's tumble, they'll definitely jump into the top 12, and might even sit at #11 after ISU's weak month.

#14 Illinois is the interesting case. They've gone 4-0 over the last two weekends, sweeping both Kent State and #9 Oklahoma. They'll be in a fight with Oakland and Iowa State for that last spot, and again, I think Al Murdoch and Iowa State are going to find a way to be in the tournament yet again. If the voters feel otherwise, I think Illinois grabs that final spot.

So, to recap - Oklahoma, Penn State, Robert Morris (IL), and Iowa State are in; Oakland and Illinois are on the outside, looking in.

As for the Icers' weekend, I'll start with providing some deserved praise to defenseman Brian Dolan. He has worked his way into the starting lineup regularly, and he had two great games against Robert Morris this weekend. He was constantly working hard, keeping the play alive in the offensive zone, while doing solid work against some of RMU's top players. The defense in general looked better than normal this weekend (even if the score doesn't reflect that), but Dolan was playing at an extremely high level this weekend. Also, forward Nick Seravalli looked like he was finally returning to form after missing much of the season due to an injury. And you can never have too many scoring weapons when Nationals roll around.

Unfortunately, everything wasn't coming up roses this weekend - especially with the goaltending. Teddy Hume looked awful. Maybe it was the rust, maybe it's the drop in confidence after losing his starting job, but whatever the case may be, he looks poor in between the pipes. Which isn't helpful, since starter Matt Madrazo hasn't looked his normal, solid self this past couple of weekends. He's still the best option the Icers have, but should he start to struggle or fatigue during the tournament, someone (like Dan Ivanir) is going to need to be ready to step in.

Some Love for the Ladies: With the four players and the coach back from Turkey, the Lady Icers were hoping to turn their losing streak around. Not surprisingly, when a team has an actual goalie, they have a much better chance at winning. Trying to keep their #7 ranking, the Lady Icers traveled to #9 Liberty in the first two of four straight games between these two teams. After a few disappointing losses, the ladies turned things around, winning 2-1 on Friday night and ending Saturday's game in a 2-2 tie. The two teams will face off again this weekend in Happy Valley in the final games of the regular season for the Lady Icers.