With all the hand-wringing this week over perceived institutional and facilities slights to the Penn State basketball program, I thought I'd dig around the Penn State Wrestling corner of the interwebs to see if there might be anything to learn.  The Penn State Wrestling Media Guide had some helpful information, including a few paragraphs on the history and function of the Penn State Wrestling Booster Club on page 8. The PSWC has about 1200 members and teams up with the Student Affliate Club to run a pretty decent website (a nice addition to any rasslin fan's Reader), to support the wrestlers, their families, coaches and administrators at picnics and socials, and to organize bus trips to matches including the Big Ten and National Championships.  It produces 8-10 newsletters a year for its membership, which now ranges across 29 states.  It's also pretty active with application of the funds it raises:

The Booster Club is now developing new strategies for better promoting Lion wrestling. Proceeds from membership and donations have helped purchase equipment, produce both recruiting tapes for the coaches and annual highlight films available to the public, funded satellite broadcasts of matches, and supported promotional activities such as schedule magnets and vacation prizes at wrestling matches.

When the Penn State Athletic Department hired Cael Sanderson away from Iowa State, it was the icing on the cake for a wrestling program which had been building for success for some time.

The Penn State wrestling facilities, thanks to the donations of PSWC members and other wrestling fans willing to part with their money to see some success on the mats, are top notch.  So nice in fact, that the folks over at flowrestling.org declared the wrestling room of the Lorenzo Wrestling Complex (so named for former head wrestling coach Rich Lorenzo) in Rec Hall the best in the country.  In this video taken in August 2008, about 6 months before Sanderson was hired, Director of Wrestling Operations Matt Dernlan walks us through and gives us a tour of the place where we've hopefully been grooming the next generation of champions. Hoops fans may be interested in the focus on all the flatscreens and dropdown screens mentioned.  Also, pay no attention to the human-sized sock puppets dangling from the walls. Nothing to see there.

You may have noticed the cameraman panning in on some of our National Champions honored on the wall.  Here's a complete list of the 18 wrestlers who have earned 21 NCs over the years: 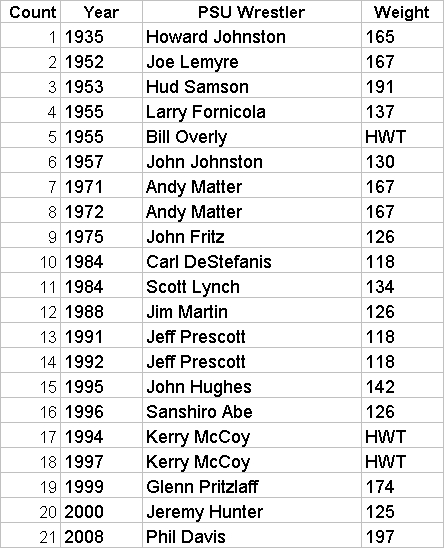 You may have also noticed the plaque labeling the room the Joyner Family Wrestling room.  This was the result of a gift from the family of Dave Joyner, one of the last great two-sport stars at Penn State.  In addition to wrestling and playing football from 1968 - 1972 (achieving All-American status in each, including a runner-up finish at NCAAs in 1971), Dave was a stellar student and, along with Mike Reid, was the go-to citation my mother used to teach us about the importance of academics in the Penn State tradition.  After graduation, Joyner went on to medical school at Hershey, then founded his own sports medicine practice and embarked on a successful medical practice.  Dr. Joyner has been a member of the Penn State Board of Trustees since 2000.  In this NittanyLionGrappling bio and intervew from some time ago, you can see more details of an amazing career.

When I rang my mom seeking some tips for this post, she reminded me that my high school wrestling coach, Dave Weber, wrestled at State College High and at Penn State at the same time as Joyner, and that he was recently elected to the PIAA District 3 Hall of Fame.  Congratulations, Coach Weber!

One of my new rasslin friends over at FOS (I can't find the post to properly credit, but thanks!) gave me this interesting link to a Penn State Board of Trustees meeting agenda from March of 2007, where it was decided which aspects of the wrestling and other facilities would be named for which donors and in whose honor.  It's pretty fascinating to see the variations in language requested by different donors.  For example, a gift to name a wing of the Sports Medicine Center got this description:

The Orthopedic and Primary Care wings in the Sports Medicine Center for a gift from William and Josephine Weiss in honor of Dr. Wayne Sebastianelli. The plaque should read:

"In recognition of their most generous support for the Penn State Sports Medicine Center,the Orthopedic and Primary Care areas are named for William and Josephine Weiss. Their leadership gift was made in honor of Dr. Wayne Sebastianelli and recognizes his many contributions to the health and well being of Penn State student-Athletes and the Centre County community."

While these portions of the wrestling facilities were described like this:

In 1965, Bill Koll took over the coaching reigns from Charlie Speidel, who retired after 34 years at the helm.  He coached at Penn State for 14 years, but is regarded as the patriarch of Penn State wrestling because of his teams' successes on the mats:

So it's easy to see why the gracious anonymous donor named the locker room after him.  As the flowrestling guys continue their tour with Coach Dernlan (who drops a funny third person self-reference) into the Bill Koll Wrestling Locker Room, check out the wonder of the dad and kid who stumble into the tour, and pay attention to Coach Dernlan's words about where the money comes from and the perspective he gives about what it means to the team:

You may have noticed all the doors they went through just to get to the locker room.  There's a funny third video up on flo that I didn't embed, but which you may want to peep if you're planning on trying to drop in on a practice someday.

There are more than a few differences in culture between wrestling and basketball fans, the most outstanding being size and community.  Wrestling is a small community and deeply interconnected.  There are far fewer extant programs at all three collegiate division levels than basketball, and this lends itself to a kind of innate cohesiveness among its followers.  The wrestlers grow up competing against the same guys (and girls, unless 'as a matter of conscience and faith you do not believe that it is appropriate to engage a girl' in a wrestling match*), and the parents see the same other parents at matches and tournaments, so it's somewhat natural for the community to be tightly knit.  But even as a microcosm, the Penn State basketball community could learn a few things from wrestling, most importantly: how to organize, raise and spend money.

*This is a very interesting development to keep an eye on.  As the sport of wrestling grows in popularity, more and more young girls are getting involved and participating.  My then-8yo nephew started wrestling competitively for the first time last year, and his very first match was against a girl, who beat him 4-1.  My mom says the whole thing was surprising and confusing to him--he didn't know that girls were even allowed to wrestle, and then he didn't know if it was ok to be physical against her.  While that girl was the only one participating at that first meet, mom counted 6 at last weekend's meet.  That linked LA Times article above indicates that only California, Texas and Hawaii sponsor girls-only high-school tournaments, so for the near future, we can expect more stories of actual, and avoided, battles of the sexes on the mats.