Share All sharing options for: Penn State Invited To Early Season Tournament In 2011-12

While I know for some of you paying attention to the current basketball season is hard enough, hoops fans were given a glimpse of the 2011-12 season today with the announcement of the field for the 2011 Naismith Memorial Basketball Hall of Fame Tipoff, in Spingfield Massachusetts. If that isn't the longest name ever, I don't know what is.

For Penn State this provides two things. A good early season test, and a chance to get a few good teams on the schedule. At this point it looks as if this will run like the Philly Classic. Teams will play one or two games at home before making their way to Springfield. Assuming that this is the case, Penn State will need to win a game or two to get a shot at Kentucky.

I'll be the first to admit it'll take an act of god to beat Kentucky next year, but in the grand scheme of things playing a good team is never a bad thing. You learn, you grow, and you get it on your schedule.

As far as the rest of the 2011-12 season, Ole Miss at the BJC is the only other team known to be on the schedule. To the best of my knowledge, the 4 year series with Virgina Tech is over, which is fine by me since it only went our way once. 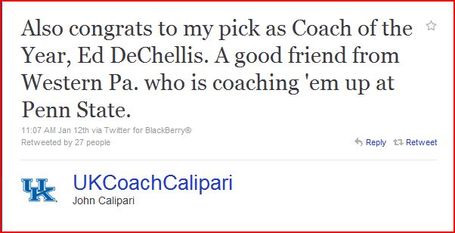