Share All sharing options for: Icers Recap: The Start of Tournament Season

The final rankings were released early in the week, and as was anticipated, the Icers not only made the tournament, but also made the jump to #10 in the rankings. A shake-up in the rankings means the Icers will take on a well-known foe in the opening round of the National Tournament - #7 Rhode Island. With games still to be played prior the National Tournament in March, the Icers couldn't plan ahead too much for a match-up with Rhode Island, but the chance existed to play the Rams in the ESCHL Tournament - a tournament more for pride and bragging rights than anything else. But before the Icers even started thinking about playing URI in the ESCHL Tournament, the ever-problematic Delaware Blue Hens stood in the way for a Saturday tilt at Brad Boss Arena.

After splitting the season series with the Blue Hens, the Icers were hoping to take game five and really start gaining momentum heading into Nationals. Four minutes into the game, Chris Cerutti would help get the ball rolling, giving the Icers an early 1-0 lead. The energy would shift back and forth, and by the end of the period, the Blue Hens would have the energy advantage but not the scoreboard advantage. That would continue to be story in the second period, when Delaware would finally get on the board 8 minutes into the period. The Blue Hens would continue to control the play and finally take a 2-1 lead with just 2 minutes left in the 2nd period. Looking to make one last charge, the Icers pushed in the 3rd period, getting a couple of very good chances to score but coming up short. A late Delaware penalty prompted the Icers to pull Madrazo and make it a 6-on-4 advantage to tie the game. But the Blue Hens would take advantage of the empty net with 21 seconds remaining, handing the Icers a 3-1 loss and ensuring that, for the first time in league history, a team not named Penn State would win the ESCHL Playoff Tournament.

News and Notes: Before I start looking ahead to Nationals (yes, I'm overlooking the senior weekend/exhibition games against Rutgers next weekend), I'll add some more insight about this game and season. Sadly, the results for this game were very predictable for two reasons. First, Delaware is that good this season. They would go on to lose to URI in the championship game, but they made it close at the end, losing 4-3 in what was essentially a road game for the Blue Hens. They're the #5 team heading into the tournament, and they're going to make some waves at the tournament this year for sure. (It helps that the tournament is being held at Rust Arena at Delaware, so they'll have a home crowd advantage throughout the tournament.)

Second, this has just been an extremely inconsistent Icers team this year. For every solid performance, there are others where the team just doesn't look in sync. And I think it's harder to take this season because we know that this team can play better from what we've seen in past seasons. They've definitely shown flashes of greatness, with some players continuing to produce big (T. O'Brien, Morrone, Cerutti), while others have made great strides this season (McDonaugh, Madrazo). Admittedly, I'm also used to seeing this team in the top 5, and having 10 losses is mind-blowing. Which is really a testament to the quality of the program over the years. Hopefully, the good Icers will show up at the tournament and make another big run. 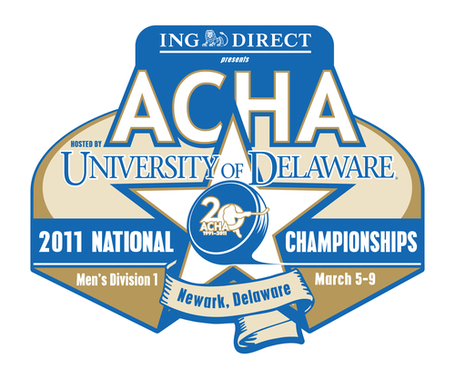 Anyone who follows my twitter knows how I felt about the rankings working out for a PSU-URI first round match-up. It was the least desirable match-up of the three I predicted we could have gotten. The two road losses to the Rams earlier in the season were somewhat offset by the home win and SO loss just a few weeks ago. But the Rams know the Icers, know the strengths and weaknesses, and know a win over the Icers is very possible, especially with a full team. (Remember URI was without four of their better players in the last match-up with the Icers.) The Icers have shown they can hang with and beat the Rams, and if URI is overconfident and more concerned with a match-up with #2 Davenport, the Icers can take advantage. So, yes, the Icers certainly have a chance, but I would have liked the Icers' chance more if the opening round game was against an opponent that didn't know us so well.

Should the Icers get past the Rams in the first round, a second-round match-up against Davenport (as I can't see them losing to Rutgers) looms. However, of the potential second-round match-ups I analyzed, Davenport is probably the best draw - Lindenwood is still really, really good; and Ohio knows us even better (and are more talented) than URI. In reality, the chances of the Icers getting to the semifinals are very slim. But a rested and ready Madrazo and a motivated Icers team could still make waves at the tournament. Perhaps playing with no expectations is exactly what this team needs to play to their full ability.

Some Love for the Ladies: If I was upset about how the men's rankings shook out, it hit a whole new level of anger after hearing the Lady Icers missed their National Tournament by one vote - finishing 9th in the final rankings. This is a team that has done very well playing against some top competition, with their biggest problems coming when their two goaltenders were chosen to play for Team USA. It's a sham, and I can't wait to finally be out of the ACHA (there, I said it). With this news on their mind, along with it being senior weekend for the ladies, the Lady Icers took it to the Liberty Flames on Friday, winning 2-0, but dropped the Saturday game, 5-3. The ladies have one last weekend of games with the ECWHL Tournament next weekend. But it should have been just the start of their post season.