With the National Championships coming up this Thursday in Philadelphia, and Penn State sending 8 wrestlers there to compete, we thought another look at the thrilling 1-point win last Sunday might help us better know what to expect this weekend.  Just after the team championship was clinched, Penn State also cleaned up with the following Big Ten Awards:

It was great to see Quentin get this honor, one he truly deserved for his fantastic run through the championship. He's still only seeded ninth for this weekend's nationals, but if he continues to wrestle to his ability and not to his seed, we could see some great things.  I was a little surprised to see Taylor to get Wrestler of the Year over Michigan's undefeated Kellen Russell, but that doesn't mean he didn't deserve it.  While Russell, an upperclass Junior, kept his record unblemished in a wickedly tough weight class, Taylor was more thoroughly dominant, racking up bonus wins in 32 of his 34 victories.  I would have been fine if Russell had won, but am happy for David for adding another trophy to his growing collection.

Capping this season with the Big Ten championship, Sanderson has now coached his teams to conference championships in 4 out of the 5 years he's been coaching.  At Iowa State he won the Big Twelve Championship in 2007, 2008 & 2009 (in 2010, Penn State and Sanderson finished 5th in the Big Ten).  Conversely, Iowa coach Tom Brands, the measuring stick for all wrestling coaches aspiring to greatness these days, has coached teams to conference championships in only 3 of his 6 years coaching.  Brands' Virginia Tech teams came in 2nd and 5th in the ACC in 2005 & 2006, and his Iowa team finished 3rd in his first year in the Big Ten in 2007.  Importantly, however, he has also coached 3 National Championship teams, while Sanderson is still fighting for his first.

Before we get back into the matches and the scoring after the jump, let's take a look at the GoPSUTV celebration video from last week:

While the second place team in a one-point decision is left to wonder where along the line they faltered, the first-place team has the luxury of crediting each individual victory as the difference in the final outcome.  Although Penn State didn't get its best from some of their wrestlers, every little bit of effort helped and ultimately provided the last straw in the final disposition. Following is the weight by weight breakdown of all matches and points, where we can see the makeup of Penn State's winning and best-ever 139 team points.  Final brackets here.

Brad Pataky has had a tough year, injuring his knee in his final season.  He only came back to action a few weeks ago and his knee was still very heavily wrapped.  He went 3-2 on the weekend and finished 7th and, while disappointing, his 3 victories were all by Technical Fall and he earned an important 10 points for the team. 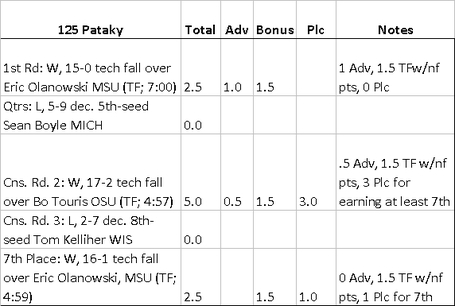 Andrew had an awesome tournament.  In addition to his first conference championship, because of his draw and absence of a first round bye, he was able to rack up the second-most team points behind Taylor.  Penn State got some team help from Wisconsin's Graff, who was able to keep Iowa's Ramos to a max of 10 Placement points instead of the 12 second place would have earned.

Thanks to Penn State wrestling blogger and BSD reader KxRussell, we have some excellent post-match interviews we can embed.  Here's Long:

The luck of the draw had Alton earning at least 8th place even if he hadn't won a match. And despite still failing to break through against any of the Big Ten's Big Four at 141, he did better than that and finished with important team points by placing to his 5th seed.  Additional team help came from Ilinois' Jimmy Kennedy who edged Iowa's Montell Marion for 3rd, 9-6, preventing Iowa from an additional team point. 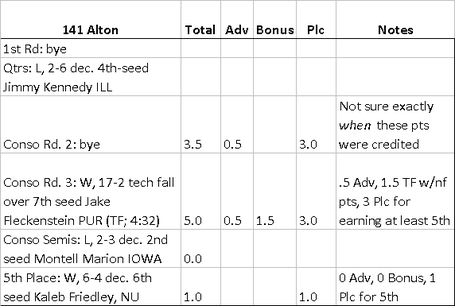 Frank also won his first Big Ten Championship and, like everybody in the lower weights, also added bonus points in at least one match.  This Big Ten run also helped him earn a nice draw as a number 2 seed this weekend at nationals. 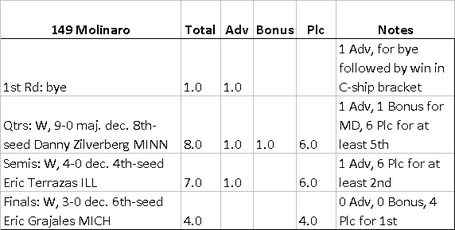 Here's Frank after the championship match talking about going un-scored upon throughout the tournament, his early Big Ten trials by fire at the hands of former greats Metcalfe and Palmer, and what it will take to beat Dake or Caldwell at nationals.

Taylor scored the most team points for Penn State, earning a major decision and one of two team pins along the way to what looks like the first of many Big Ten Championships.  Some say Iowa's St. John, is closing the gap on Taylor, but if you watch the finals match again, you'll see St. John's takedown came as the result of a scramble after action initiated by Taylor.  Their draw at nationals this weekend has them meeting in the quarterfinals if neither choke, so perhaps we'll get to prove this theory further as soon as Friday. 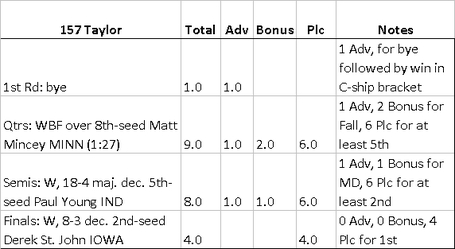 This weight was terrifically important, given the uncertainty of who Sanderson would even send out there for this tournament. After getting majored by eventual 3-time champ Howe, Jimmy buckled down and scrapped and clawed his way to 7th place, earning critical bonus points along the way. 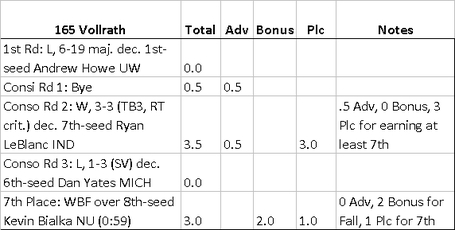 Ed did was what needed and expected and was the 4th Penn Stater to win his finals match for his first Big Ten Championship. The performance, along with his season's body of work, earned him a #2 seed next weekend, and he has every bit the talent and determination to come home from Philly a national champion. 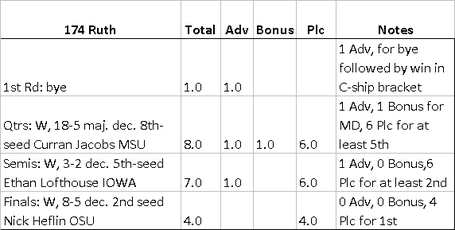 Here's Ed after the match breaking it down:

This tournament would not have been won without the Quentin Wright of old. The same goes for this weekend. Q is one of the most talented wrestlers in the country at 184 and if we're to bring home a national championship, we'll need Q to look like this again.  As a number 9 seed, he's set to rematch against Steinhaus early, so we should know by Thursday night if we're looking at something special again.

Here's Quentin talking about how he bounced back, some about his shoulder (not really) and lots about his attitude and community support:

Penn State has struggled at this weight for some time now. Hopefully next year, Sanderson will work something out in the lineup to fill this hole.

We talked about Cam last Sunday night. His performance cost him for nationals seeding and he's now looking at a #9 seed and a rematch with Minnesota's Nelson early in the tournament. If he can't get over that hump, here's hoping he fights back through the consolations with the toughness he displayed in the 5th place match. 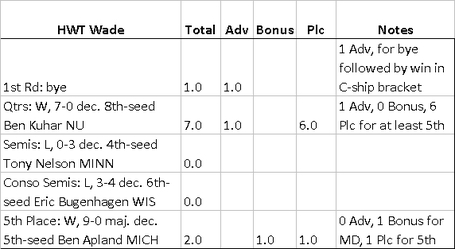 Okay, if you made it this far, this video is worth its weight in gold.  Also, if you've never had an opportunity to like Tom Brands before, this may change your mind.  I sure did enjoy him.  As he stands outside the arena where Penn State is being crowned Big Ten Champions, as Fight On State, Hail to the Lion and even We Are the Champions are blaring in the background, and Taylor, Wright and Sanderson are announced as end-of-year award winners, dude is epic in his focus and concentration on the performance of his team and in the answering of questions.  In BSD sidebar chatter, Spak quipped:

It's like the interview they always do with the coach of the super bowl loser or final four loser, but instead of lasting 30 seconds it lasts 4:45 and instead of happening outside the locker room, it happens while the coach stares at the other team receiving the trophy.

Just epic gold.  Kudos to you, Coach Brands, and good luck--but not too much--this weekend.