Last time, I discussed the sport a bit and the major role players on the Penn State team. This round, I'll finish off the remaining team members and provide some insight as to what you can expect for the NCAA Regionals at Alabama this weekend.

Event Specialists: (Girls who are usually used specifically for one event.) 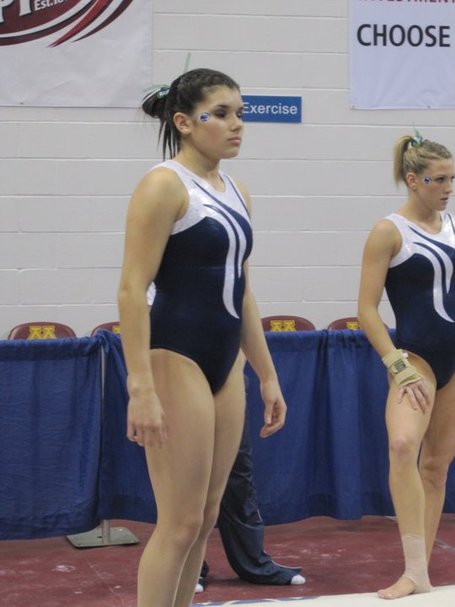 The third regularly used freshman, Kristin Blades is used only on the vault for now. And so far this season, she has done a great job of putting up good scores consistently. Averaging just over 9.80 this season, Kristin is a big part in making sure Penn State hits their 49.0 on vault. (Also, she looks far too much like Sharaya Musser at times. Seriously, it took way too much time trying to make sure I was picking out the right girl for these pictures.) 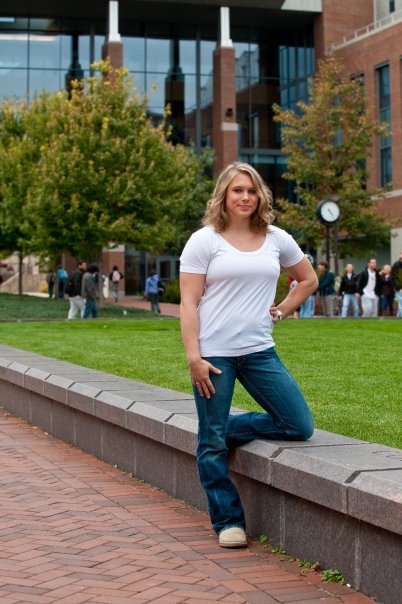 On the uneven bars, junior Alex Stine has become a strong scorer on an otherwise difficult apparatus. While not as high-scoring as Natalie Ettl, Alex puts up solid scores consistently to help the team be one of the best bars teams in the nation. Her season average of 9.820 helps the team get to the 49.000 level, and her season high of 9.85 means that she's consistently hitting solid routines.

The Alternates: (The girls here are the unlucky victims of injuries. Otherwise, they'd be easily inserted into the lineup at any moment.) 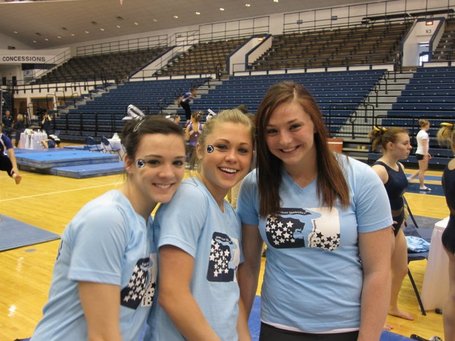 Senior Heather McElwee is one of the first alternates on floor and beam, should something come up the day of a meet. She is very talented, but has been slowed by a nagging ankle injury. She's been a great asset to the team these past 4 years, and hopefully she can help the team make their way to the Top 12 and even Super Six at Nationals. 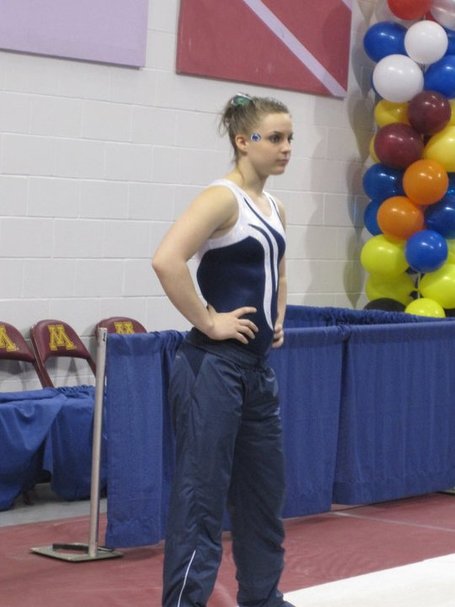 Earlier in the season, freshman Kassidy Stauder was a regular in the lineup, competing regularly on beam and floor, and occasionally rotating between vault and floor. Unfortunately, an ankle injury took her out of the lineup for a bit, and she just hasn't returned to full form just yet. But if the early portion of the season is any indication, she'll be a great asset to the team for years to come.

Hailing from an area very close to my original stomping grounds in New Jersey, Stephanie Brock's freshman year followed a very similar track to that of Kassidy Stauder. After opening the season on a rotation of a few different events, a scary fall on the uneven bars has sidelined Stephanie for the rest of the season. Thankfully, the injury was not serious, and she should be back in form for next season. And like Stauder, Brock should be a big contributor for years to come.

The 14th member of the team (but #1 in our hearts) is sophomore Susan Martens. A quiet freshman campaign lead into a sophomore season that started with an ankle injury that has set her behind her teammates for the year. She's a talented gymnast from Arizona, and hopefully next year she can begin to show the talent she has brought to Penn State. (And yes, her hard luck thus far combined with her naming The Beatles as her 'favorite entertainer' makes her one of my favorites.) 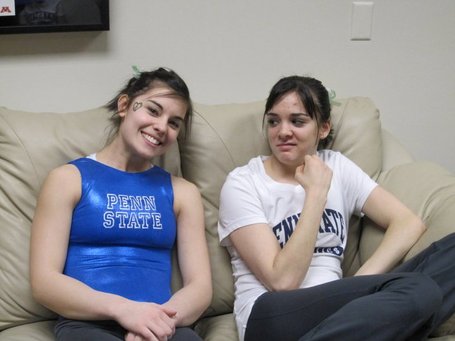 One last pic for the road...

NCAA Regional Expectations: Before getting into the analysis of the next meet, I wanted to go over the rotation system of these sort of events. Since there are 4 events and 6 teams, it's obvious that 2 teams are going to have to sit on each rotation. To make it easy, look at the rotations as two circles - an outer circle that includes the 6 teams, and an inner circle that involves the 4 events and 2 byes. The inner circle remains fixed, while the teams in the outer circle rotate from one event (or bye) to the next, keeping the same order. The NCAA has released the list of teams at each of the regionals and pdf files for the rotation at each regional. The seedings were determined mostly by snaking through the top 36 ranked teams (found here, among other detailed college gymnastics stats), with some liberties taken due to site locations. The top two teams from each regional meet will move onto the NCAA Championships (April 15-17).

So lets use the Alabama regional to go through the rotation. Penn State will start on the balance beam, which means they go from the beam (Rotation 1), to a bye (2), to the floor (3), to the vault (4), to the second bye (5), and end on the bars (6). The other teams will follow this same rotation just in a different order depending on where they start. The pdf on the NCAA site linked above shows exactly where the teams in the rotation order. In this case, Illinois is one rotation ahead of Penn State. So whatever event (or bye) the Illini are finishing up, the Nittany Lions will be moving to on the next rotation.

Also, you'll notice at times a competitor or two from random teams not at the regional being added to an event. Gymnastics rewards both teams and individuals, so if a gymnast has proven to be one of the top scorers on an event (or events), but their team was not strong enough to make the top 36, then the individual is invited to the regionals. This allows them the chance to qualify for to compete for an individual event championship at the NCAA Championships in a couple weeks.

As for the meet itself, I'll start with just looking at Penn State. Again, the girls will start on the balance beam, which is one of their weaker events. While it has their lowest average score for the season, they are still ranked 12th in the nation, so their mediocre is still better than most teams' best. From there, things look up, as Penn State will move to the high-scoring floor exercise (average score is 9th in the nation) and vault (average score is 22nd). These two end up being higher scoring than beam and bars because there are fewer chances for major deductions, and the skills don't have as many technically demanding components. That's not to say that they're easier, but they lend themselves to higher scores. After vault, the girls have the second bye before finishing on the uneven bars. Two huge positives from this. First, they end on an event, which means they'll have a better idea of what they'll need to score to move to the Championships. Second, it's the best event for the girls, as it has the highest average score on the season (49.215) and highest national ranking (8th). Outside of ending on floor, it's probably the most ideal rotation for this team.

As for the competition, Alabama is ranked #2 and they should run away with this thing. They're home, they're freaking talented, and they'll be focused on sending a message, especially to #1 Florida. The bottom three teams - Auburn, Central Michigan, and Kentucky - are talented, but no where near the top 3. In fact, the season high scores for those three teams are all below Penn State's season average. The team to watch, then, is Illinois. Early in the season, Penn State finished just behind Illinois at a meet with Michigan. At the Big Ten's, Penn State finished ahead of Illinois by 0.300 points - a decently-sized margin at this level. Illinois' rotation is one ahead of Penn State, so except for beam, the Lions will know what they need to hit to stay ahead of the Illini. Penn State should finish in second and move to the NCAA Championships. And depending on how well they perform, there is always the possibility they make a run at Alabama for the win.